But first it was open market day in Selcuk and we didn’t have to leave until a little after noon. I walked down to the center of town and decided, as I was walking and looking down at my dusty shoes, to avail myself of the services of one of the shoe shine men along the street. He had a stool and a case full of polishes; what I had to do was stand, Captain Morgan style, with one foot up on the footrest, alternating them at his request, as he polished and shined away. He had just begun when he asked if I would like some tea. I said yes and he called across the street to his friend who ran the café and, next thing I knew, I was standing in the middle of the street, Captain Morgan style, getting my shoes shined and drinking tea. I walked away with both my shoes and my spirit brightly polished.

As I was walkıng, I saw Julia standıng ın front of her shop. She spoke to me and asked how we were doing. I told her we were leavıng ın a few hours. She saıd again how much she had enjoyed meeting us; I told her we would pass her name along to anyone we knew coming to Selcuk. She asked, as she had the day before, that we pray for her father who is recoverıng from a stroke. I said we would. Then she said, “Whenever you return, you are always welcome to stay in my home.”

The market place sprung up overnight where there had been open streets and parking lots the day before. Pieces of cloth and canvas had been strung to create a roof of sorts and each street had become a different department in the town that was now a giant store. One street was shirts and pants, another socks and shoes, another kitchen ware, and another toys and unnecessary plastic objects. At the hub of it all were the fresh fruits and vegetables: row after row of booths with fresh oranges, tomatoes, herbs, and (the thing I most wish I could bring home) fresh grape leaves. Scattered in between them were spice vendors, candy and dried fruit stands, and cheese merchants. I also found a couple of guys selling some kick butt pastry items and had the best cheese and filo pie you can get for fifty cents anywhere in the world, I’m sure.

I got back to the Kalehan Hotel in time for us to grab a bite of lunch and check out. Mehmet, whose name I have finally learned how to both spell and say (he’s named after a sultan) made a special effort to get to work early to say goodbye to us. We loaded our bags, which get heavier at every stop, into the van and drove to Ismir. Turkish Airlines packed every seat and we got to Istanbul to find out our plane to Kayseri was delayed. Ginger and I sat in the airport and watched people until it was finally time to board on what was also a completely packed plane. In the crush to get on board, we ended up in the middle of a group of elderly Turkish people returning home, as best I could tell. They were not frequent flyers. The man standing next to me was perturbed and began to voice his displeasure to me – in Turkish – because he thought I would understand. All I knew to do was try to match his facial expression with mine and nod a lot. The younger man behind me finally engaged him in conversation and the old man turned away from me. I hope he knows I was pulling for him.

We landed at Kayseri to find yet another person standing with a sign with our name on it. We rode with a few other folks, Americans and Dutch (who lived in Germany), through the dark 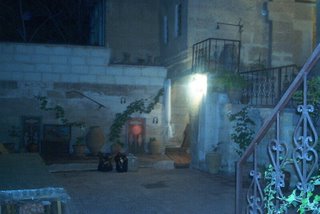 night across landscape we could not see to somewhere most of us had never been. We pulled up in front of a sign for the Kirkit Pension (owned by the family who also owns our travel company) and the driver unloaded our bags. We walked up the small stone alleyway, as a light rain fell, to meet a very nice man standing in the doorway to the courtyard.

“Brasher?” he said in a Turkish accent with a hint of French.

We nodded and he showed us up some stairs to our room, which is in a cave. We put the bags down and he said, “Dinner?” We nodded again and he motioned for us to follow. It was 10:30. We went down some stairs this time and into another cave which was wonderfully decorated. He seated us at a long table and went into the kitchen. First he brought out an amazing soup and then a plate with spaghetti in a wonderful tomato sauce, a small green salad, and a squash that looked kin to a zucchini cooked and stuffed with rice, beef, and tomatoes. That course was followed by a desert of kadifi (shredded filo) that had been sweetened somehow and coffee. During dinner I tried to dust off my high school French to communicate a little with our late night host; we managed a bit of a conversation.

Then came the third of his one word questions: “Balloon?”

That meant our late evening was going to be followed by a very early morning, since we are going to take a hot air balloon ride over the Cappadocian landscape tomorrow. H 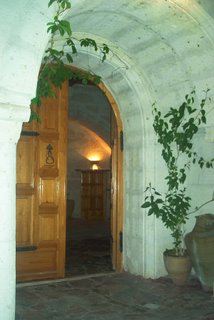 e wrote down the time we had to be ready; I stumbled with my French until I could figure out how to ask for a wake up call. We thanked him and went to bed.

We are now in our third stop in Turkey and the depth of the hospitality seems unfathomable. We have a growing collection of photographs and suitcases stuffed with gifts and mementos, but even better are the names, faces, and encounters we are carrying from place to place. I have no idea where we are or, for that matter, much idea how we got here. What I do know is we are welcome.