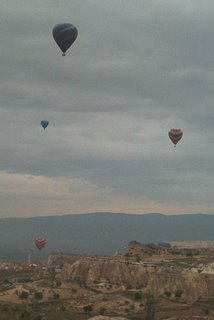 Yesterday was a full day.

At 4:45 in the morning, Benden, the same man who let us in last night knocked on our door to tell us it was time to get up: we had a balloon to catch. By 5:15 we were in the minibus on the way to the office of Kappadokya Balloons; by six we were in the field watching our Coca-Cola balloon inflate. Jan, our Swedish balloon pilot took us up, over, and around the marvelous rock formations that make up the Cappadocian countryside. We were not the only balloon in the air. Sunrise is rush hour, as far as hot air balloons in Cappadocia are concerned; there were at least eight other balloons floating around us. We had sixteen people in our basket: Ginger and me, a Korean couple on their honeymoon, and twelve Americans on a tour with the Art Institute of Chicago. We had a great time together, flying as high as nearly two thousand feet off the ground and then low enough to almost touch some of the rock formations as we dipped down into the valleys.

After the flight, they brought us back to the hotel for breakfast. We thought we had the morning to rest and then a tour in the afternoon. We were wrong. Our tour began at 9:15, which was about ten minutes after we finished breakfast. We climbed back on the minibus, which took us — this time — to meet Seref (SHER eff) and the rest of our group at a panoramic viewing spot just ou 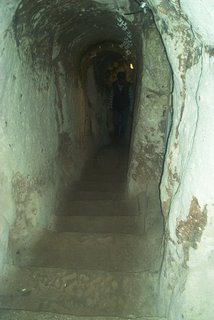 tside of Goerme (Guh ER me), the next town over. By ten o’clock, we were climbing down the stairs of the Derinkuyu underground city, which goes eight levels and about seventy-five yards down into the earth. It was a claustrophobic’s dream – and a challenge for those of us who are a bit larger than your average Cappadocian might have been.

Cappadocia sits in central Turkey, or Asia Minor, and was the place you invaded while on your way to invade the place you were really after, regardless of which direction you were going. From the Hittites on down, this has been a place where the folks needed somewhere to hide when the invading hordes arrived. Their answer was to dig holes into the limestone and hide underground. As the population grew, they dug deeper and deeper. We went down seven levels to find a church that had been dug out in the fourteenth century. It was no amateur job; they had figured out a natural ventilation system that still works. We climbed down and then we climbed back out.

Our next stop was the Ihlara Valley, where Seref told us we were going hike the valley floor for about three and a half kilometers and we “would find it was quite flat.” Flat, t 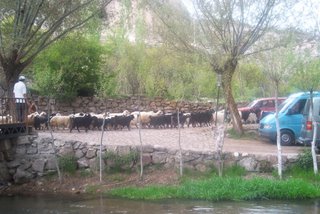 hat is once we got to the bottom. The valley was once inhabited by small groups of people – mostly Greek – until the population exchange in 1924. They lived in the caves, they farmed the valley, and they dug churches. We saw one where some of the frescoes still exist. The walk through the valley was peaceful and gorgeous. The vegetation was lush, the small river was flowing joyfully, and the folks along the trail all seemed to be quite happy. We were too, and quite motivated: lunch awaited us at the end of the hike. We ate outside in a small café in Belisirma beside the water – until the rain started, then we moved inside.

After lunch we drove a bit more to a small village that still uses the caves for their farming and even their houses. We had time to climb around and take some pictures. I became fascinated with the doors in the rocks. Then we stopped at a Caravanserai, which was one of the places traders stopped in the days when the Silk Road was the major trade route. 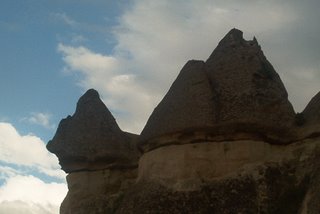 there we went to Pasabagi where we could see the “fairy chimneys” up close. The geological history of Cappadocia is clearly spelled out in the rock formations. Part of the story is the layer of basalt settled on top of the limestone in the Way Back There Era. When water flooded the area in the Era After That, the limestone gave way where the basalt did not, leaving these mushroom-looking formations that have been nicknamed the “fairy chimneys.” They are spectacular. Over time they have been used for houses, storage, and even contain some churches. There are a couple of them that have stairs inside for those who feel like climbing.

Our final stop was a pottery workshop. Avanos, the town where we are staying, is filled with pottery makers because of the red clay they can draw out of the Red River tha 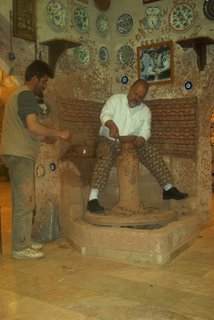 t runs through town (the longest river in Turkey) and the white clay they get from the limestone of Cappadocia. We saw artisans making the pots and painting them as well. They even offered an opportunity for one of us to learn a new craft. Here is a shot of a burgeoning artist at work.

We got back to the hotel about seven, which gave us time to clean up a bit before dinner here at the Kirkit Pension. The other guests in our hotel all speak French, so we talked to the hotel folks mostly and enjoyed the live musicians playing traditional Turkish music on a drum and a saz, which is a Turkish instrument that looks like a cross between a long necked mandolin and a pregnant banjo. I loved the Turkish melodies, which follow a different scale than our songs, and I loved thinking that we were listening to the Turkish equivalent of “This Land is Your Land” or “Blowing in the Wind.” The meal was, of course, amazing: yogurt, cucumber, and dill soup (cold); squash and beef croquettes; salad; fresh tomatoes; and apples and oranges for dessert. We finished the evening with some Turkish tea and watched several liquored-up French people dance to the music and enjoy themselves.

More than once during the day, I said to Ginger (or she to me), “I can’t believe we are getting to do this.” We live on an amazing planet and we have gotten to experience a bit of one of its most amazing places. What else is there to say but, “Thank you” – to everyone who has had a hand in making this trip possible.