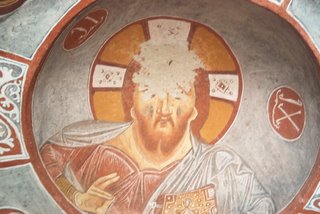 We spent out last day in Cappadocia on another tour. All the participants were people we had been with the day before: Charlene and Nancy, from San Diego, who began a three month trip watching the solar eclipse in Libya and, after moving across Turkey, were headed to Georgia, Azerbaijan, and Kazakhstan; and Yuko, a Japanese teacher who had stopped in Cappadocia for a few days after being at a conference in Europe. The new addition to our group was Nezrin, our guide, who was full of both energy and information.

We started our day at the Goereme Outdoor Museum, which preserves one of Christianity’s oldest seminaries. The caves and rock formations are filled with churches, class 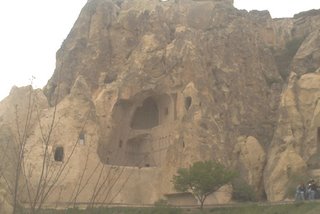 rooms, and living quarters. There are even stone dining tables carved out of the rock in some of the rooms. Basil, Gregory of Nyziansus, and Cyril were three of the biggies in those days; these were the hills where they trained those who would lead the church in the early years. The location alone created a sacred sense, the grandeur of the landscape pointing to the power of our Creator. The shelter of these caves that have been inhabited by humans for millennia made me think of an old hymn in new ways: “Rock of Ages, cleft for me, let me hide myself in thee. “

As we walked between the caves, and climbed up into a few of them, I imagined the students – disciples, you might say – walking and talking on the very same paths, turning over the ideas they were hearing in their minds, and dreaming of where God would call them beyond the beautiful hills that surrounded them. From those early days, the churches in these caves were used for centuries; the remaining frescoes date back to the eleventh century. The images on the walls were the same I have studied and am learning to write in icon class. What an amazing thing that the story of our faith has come down, heart to heart, from those caves until now. I wonder if those folks 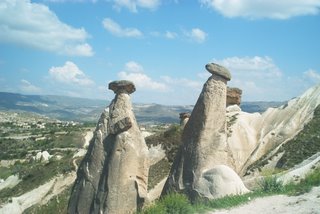 ever imagined such a thing.

We stopped at a couple of places as we moved around the area, looking at the panoramic views and having tea. We then spent some time in a jewelry workshop and made our way to lunch. When we have been with larger groups, our guides have generally used meals to get some time to themselves. Since we were only six, including the guide, Nezrin joined us, which gave us a chance to know her a little better. Like almost all of our guides in both countries, her parents were teachers. All of them have liked to learn and have not wanted to be confined to a classroom, or an office job. Being a tour guide offers them a chance to do all the things they love best. 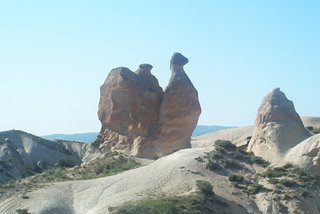 After lunch, we toured a winery – OK, all we did was taste a bunch of wines – and then we drove to another valley of “fairy chimneys,” this one known as Animal Valley because, as Nezrin said, “If you have imagination, you can see animals; if you don’t have imagination, you can just walk around. It’s up to you.” The six of us spent twenty or thirty minutes describing the menagerie we saw around us, which included everything from a sleeping puppy to a camel to a turtle and even a Snoopy head.

Our last stops were in two old Greek villages, Mustafapasa and the other whose name I can’t find right now. Though the Greeks left with the population exchange in 1924, these villages have kept their own unique charm. They were very quiet compared to some of the other towns in the area that depend so heavily on tourism. We walked around and looked at s 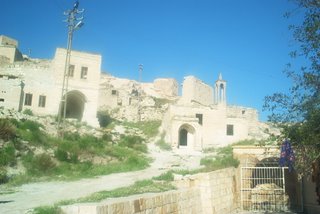 ome of the architecture, some of the ruins, and, of course, had some tea.

In the second village, we saw something we had not seen this whole trip: the ruins of a mosque. All through Turkey we have seen churches that are museums or archeological sites, but this was the first mosque that was no longer in use. Nezrin said the reason was the town had been abandoned after an earthquake and then rebuilt farther down the hill, at the government’s instructions. There were some frescoes of tulips and carnations (no human images are allowed in Islam), and some other decorations. We could still see the pulpit and the place where the priest offered prayers. Of all the ruins, I have found the empty houses of worship the most haunting. Although there is some sadness, I suppose, in the fact that what was once a vibrant worshipping community no longer exists, I have felt more of a sense of reverence and conn 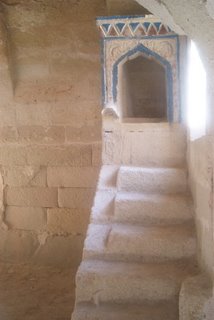 ectedness. Like the giant stone structures that tell the story of all creation, these stones were formed as the expression of one group gathered together for a time. When Seref was summarizing Turkish history at the beginning of our tour on Monday, he said, “In 1922, the Turkish Republic was founded; we do not know who will be next.” We won’t always be here; chances are the stones will outlive us.

When the tour was over, we came back to the pension in time to catch our ride to the Kayseri airport and say goodbye to Cappodocia. Our trip is making its final turn toward home. We drove to Kayseri and then flew to Istanbul for one more night at the Tashkonak; this morning we flew to Athens. Though we were only flying in and flying out, I loved that we were coming back to somewhere we had already been. As we drove from the airport to the hotel, we recognized things; we could almost say we knew where we were going. The night staff recognized us, as we did them, and we knew our way around the hotel. I even got to pick up the shirts I left hanging in the closet when we left for Izmir and Selcuk.

Our world has been expanded by the things we have seen. More profoundly, our lives have been expanded by the people we have come to know. Cam and Rachel are working in Selcuk to raise enough money to travel; Adam and Joel are somewhere in Georgia (and I don’t mean Atlanta); Charlene and Nancy are trekking into eastern Turkey; Aysha, Seref, and Nezrin are walking ground they know well and making it sound like new to their charges; Mehmet is telling someone else how the dinner is made; Benden is making his new customers comfortable; Julia is working hard in her shop and worrying about her father. Our hearts are as stuffed as our suitcases.