On a normal birthday, the phone would ring throughout the day with friends far and near calling to wish her well, presents to open, and, of course a cake. Each year, we also try to do something we have never done before. One year, we decided – halfheartedly – we would get tattoos of the “Christian fish” on our ankles. When Ginger told the guy she was not a fan of needles he said, “You don’t like needles and you don’t like pain. Don’t get a tattoo.” Our goal was still reached, however: neither of us had ever been in a tattoo parlor before.

This year, we were traveling, which was not new, but we were in three airports on three different land masses (which was) and our goal was to end up on Paros, a Greek island in the Cyclades, so we would have a day or two to do nothing but relax before beginning the long ride home. Onal met us early at the Tashkonak and we retraced our steps to the Istanbul airport. In the true spirit of Turkish hospitality, he stayed with us through the long check in line, and walked us all the way to immigration, when he could finally go no further. We flew to Athens and found our way to the gate for our flight to Paros – and learned then it was delayed. We were supposed to leave at 1:30 (or 13:30, as they say here); the notice said there were “mechanical difficulties” and they would give us more information at 14:15, which turned into 15:00. At 15:30 they cancelled the flight.

In the meantime, we had been on the phone with Irene, the travel agent in Athens who helped us make the arrangements, and we had also gotten to know some of our fellow would-be travelers. Two of them were mothers, each with one young child and one infant. One lived on Paros, but was from Israel. She had had her baby three weeks ago and her husband had yet to see their new son. She was a woman on a mission. When the cancelled notice went up, she almost cancelled the gate agent. The rest of us gathered round to learn what we could and then we all moved upstairs to the ticket office where they told us to go.

The second mother was less vocal, but no less effective. While we all stayed downstairs, she went up. When we got upstairs, she was moving somewhere else. When I asked what she had learned, she told me we were in the wrong place, so we followed her to yet another check in line. To make a not-so-short story a little less long, we all crashed the ticket line where we had been sent and pushed our crisis to the front of a line of people who had crises of their own so we could get boarding passes on the last flight of the day to Paros at 17:45 (5:45). Along the way I called Irene and learned one other significant detail: Olympic employees were planning a one day strike for Wednesday.

“Whatever you have to do,” she said, “ make them put you on that plane.”

Once we got our boarding passes, we had more time to wait, so we ate some lunch (we had forgotten about lunch) and then went in search of a little smackerel of something sweet. We found lots of sweet things; the problem was finding something small. In one of the chocolate shops there was a basket of individually wrapped sweets. Ginger asked which one was all chocolate and then asked how much it was.

“This is Greece;” said the woman at the cash register, “just take it.”

We made our way to the new gate, which meant going through the metal detectors yet again, to find our new flight was delayed until six o’clock. At about the time we were to begin boarding, the sign over the gate changed – without announcement – to say a flight for Thessaloniki was boarding there. Our Prophet With Child rose up once more and we all made our way to yet another gate, and another metal detector, and crashed yet another line. We finally got to our plane and landed in Paros six hours after we had planned.

The island airport is one big room, basically, and our odd little band gathered like extended family to see the new father hold his son for the first time. He sat down on the bench next to the luggage table and the rest of us laughed and cheered. One by one, people took their bags and made their ways to the vehicles that would take them to their homes and hotels. Our bus was the last to come, so we were the last ones left in the room, along with Michael, our contact person. Just then, a British woman who had been on our flight came back into the room as though she had lost something. She touched Ginger on the arm and said, “Happy Birithday!”

The island is absolutely beautiful. Our driver took us to Naoussa and the Kanale’s Hotel where we are staying. Irene booked a room for us with a balcony overlooking the little harbor. We checked in and then found our way into the village for a birthday dinn 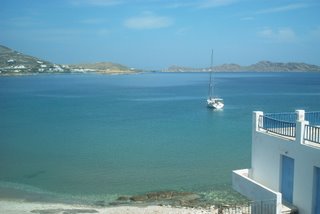 er. When we got back to the room – about 23:30 – we found a fruit basket, a bottle of wine, a birthday card, and a cake from the hotel staff. We took the cake and went up to the rooftop restaurant to get some coffee to go with it.

It was a day unlike any that had come before.