We had one full day in Paros. Today we are on our way to Athens; on Friday we will find our way back to Boston. Though our island adventures are not what one might call extensive, Ginger and I do have a pattern. She is a beach or pool person; I am not. I like to explore and to come back and report on my findings. We noticed even last night a plethora of scooters and small mo 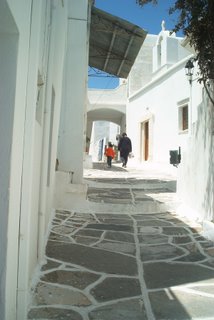 torcycles on the island, so I decided that would be my means of exploration for the day. We slept late, had some breakfast, I got Ginger settled in poolside, and then I rented a 100 cc Peugot scooter and set out to see the island.

My morning sojourn was to the village of Lefkes, which is tucked in the hills at the center of the island. After the Romans occupied the island and then left it in ruins, those who tried to reinhabit it could not establish a coastal town because of pirate attacks, so they took to the hills and built Lefkes, which served as the island’s capital for a time and was much more defensible. Now it is a painfully quaint littfe farming village, surrounded by olive and citrus groves, as well as vegetable farms. It supplies the island with fresh produce. I followed the little road up the hill and then down into the valley where I parked and strolled down the narrow stone alleys, peeking into shops and reading the menus of the various tavernas. I wasn’t hungry yet and Ginger was waiting for me to come back for lunch, so I retraced my steps back to Naoussa. On the way I did see a wonderful little bakery that provided me sustenance for the r 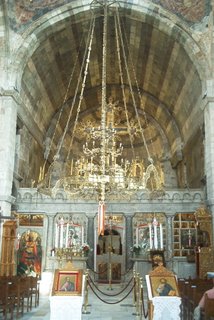 emainder of my journey – all two kilometers of it – in the form of bakalava.

Ginger and I ate lunch in the rooftop café of our hotel (at 2:30) and then she went back to the pool and I headed south for the second leg of my adventure. I followed the road, first, to Monstriaki Beach, which is on a small piece of land that juts out from Naoussa. Then I came back to the main road and went to Parikia, the capital of the island, because I wanted to see the Church of Ekatonapiliani, or the Church of a Hundred Doors, parts of which date back to the third century. The stone work was magnificent and the chandelier breathtaking. I also took time to stop in a harbor side café for a Greek coffee.

From there I continued south to Petaloudes, or the Valley of the Butterflies, which our literature said was something not to be missed. It also said we were hitting it right in season. The road there was as much of a mountain hike as the road to Lefkes, except smaller and less traveled. As I got to the top of the hill I had to go over to get to the valley, I came upon a large and beautiful church in the middle of the fields, the Church of Anathasios. It was locked, but a small prayer chapel was open, so I went in and stayed for a moment. I also took time to take some pictures from the top of the hill. I continued on my quest, only to get to the gate at Petaloudes and find a sign which said, “End of Season. No more butterflies.” I have a t-sh 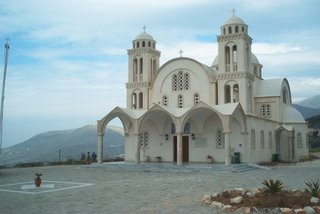 irt at home that says, “The journey is the destination.” Though I would have loved to have seen butterflies, somehow it didn’t really matter.

I found my way back over hill and dale, back to the main road, and headed for the hotel. On the outskirts of Parikia, closest to Naoussa, the road climbs and makes some hairpin turns. I slowed down as I came to them and saw a truck and a tour bus coming the other way. I moved as far out as I could and the truck pulled into his lane. No problem. The tour bus, however, swung out to make the turn and left me no road. The edge of the tarmac was ragged and fell about four inches onto a dirt road, which is where my scooter and I went, failing to stay together or to stay vertical. We both bounced a few feet and ended up on our sides in the dirt as the bus went on its way.

When I got up, I could see my pants and shirt were dirty. I could also see my elbow looked like a peeled blood orange. I have a world class scrape. The bike had a broken mirror and some scrapes of its own (I had purchased the additional insurance by the way), but it would start and it could run. I made my way the last four or five kilometers back to the rental place, which was across the street from our hotel. They were worried about the bike, and – to their credit – they seemed more worried about me. I walked back to the hotel and the staff here helped me clean my wounds. Ginger was great, as always, and while Vangelis and Nikolas applied the peroxide, she got me a glass of red wine from the bar. As the evening wore on, I became more and more sore. As Tevye says in Fiddler on the Roof, “Whether the stone hits the pitcher or the pitcher hits the stone, it’s going to be bad for the pitcher.” I don’t bounce well 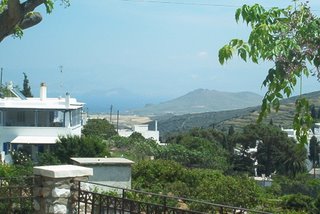 Today was quite a day. I wondered over beautiful countryside, past farms and vineyards, down streets and alleyways. I gazed across the azure blue Aegean to see the volcanic peaks of the islands that surround us. I even got a pretty good tan. And I got run off the road and hurt myself.

At 10:30, Ginger and I walked down to eat dinner along the harbor, as we did last night. As we walked, we talked about how to define the day: by the great things or one crisis. We went to a place recommended by Kelly, one of the people who runs our hotel, and I had dorat, a local fish, which the restaurant owner told me had been caught that morning by the boat next to our table. On our way back to the hotel, we stopped at Trata, where we ate last night, goodbye to Jim, our server and an American Greek who moved here from Seattle to help his cousin with the restaurant. We back to our room under a moon that has grown almost full during our trip; by the time we get home it will look much the same in the Marshfield sky as it did when we left.

Though I’m scarred and sore, we had a great day. My memories will be marked by more than my wounds.