Thursday afternoon we flew from Paros to Athens, which was the beginning of our trip back home. It was also the first time on our trip to arrive at an airport with no one to meet us. Irene had given us instructions on how to take the Athens Metro from the airport to our hotel, so we rolled our luggage to the train and took a very pleasant trip across the city to spend one more night at the Hotel Titania. For the second time in just a few days, we were returning to a place we had already been. And we had something to look forward to when we got there.

Mary, a member of the church in Marshfield and a flight attendant for Delta Airlines, specifically bid for a trip to Athens so she would be in the city on the same night we were. When we got to the hotel there was a message of where and when to meet her, so we dropped our luggage in the room and walked in the cool of the evening to her hotel, and then with her to a lovely little sidewalk restaurant she frequents when she is in Athens. Being with someone we knew in a city we had just begun to know was a wonderful segue in helping us make the turn toward home. We all ate well and sat and talked until rather late. We left Mary at her hotel and began the walk back to ours.

After about fifteen minutes of what was to be a thirty minute walk, Ginger and I realized we were not on the same street we had walked on the way to meet Mary. By now it was after ten – early 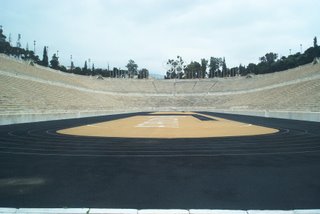 by Athens standards – but we began to try and get our bearings. We saw the original Olympic Stadium on our left, beautifully lighted, and began to remember being there with Beti and the group and how we got back to our hotel from there. We were also fortunate that Athens does a better job with signage than Boston. Our trip back to the hotel took a bit longer, but we were no worse for the wear. We crashed quickly because we knew the wake up call would come early, which it did. We spent yesterday on planes and in airports until we were safely back in Boston and then in the car with our friend Eloise on our way back to Marshfield and our Schnauzers.

In Paul’s letters to the churches in Corinth, Galatia, Philippi, and Thessalonica, he begins by saying, in one way or another, “I thank my God when I remember you,” and then goes on to affirm their faith, their joy, and their commitment to Christ and to one another. He was writing to people he had visited and was reflecting on his time with them, or planning to see them again. Over the past three weeks, Ginger and I have stood where those churches were, where those people lived, and walked and talked with the people who live there now, even as we have thought of those who are in our churches here in New England. Paul’s words resonate, in both cases:

“We thank our God when we remember you, for you have filled our lives with joy.”

There are some specific thank yous to articulate:

We do thank our God when we remember all of you.

Though this is the last official post from our trip, it will not be the last time I write about these past three weeks. I am indelibly marked by what I have seen and heard, and by what has happened to me. I also have a bunch of recipes to share.

When we got home yesterday, I went to the grocery store to get the things we needed for this morning, and realized I had not been in a store that big in almost a month. I wasn’t qui 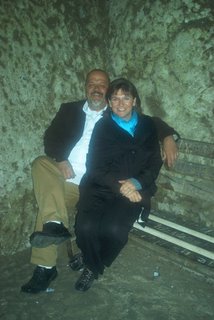 te ready for all the options. I imagine Ginger and I will be checking the weather in Athens and Istanbul for many weeks to come. There’s so much to say and I cannot find the words that adequately bring our journey to a close, perhaps because I wish it were not over; perhaps because, at least in some sense, it’s not.

I wonder if Paul had the same sense as he closed one of his letters to the Corinthians:

“The grace of the Lord Jesus Christ, and the love of God, and the fellowship of the Holy Spirit, be with you all.”