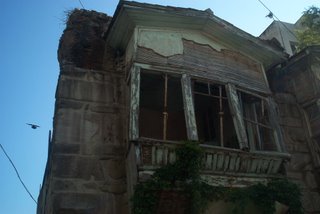 When Ginger wrote her grant application for her sabbatical, walking was the primary metaphor. She talked about how important walking had been in her life and how she wanted to walk in the steps of Paul through Greece and Turkey. She wrote as well as she walks and the Lilly Endowment let us take this trip. One of the choices we made as we planned was to schedule a free day every so often to give us time to rest, to reflect, and to walk. Yesterday was such a day.

I got up early and, while Ginger was getting ready, walked a few blocks into the center of town to take pictures of the storks nesting on top of the aqueduct. (The rundown building in this picture is built between two of the aqueduct’s pillars.) On my way back, I stepped into a shop called Moon Light and met Julia, the only female shop owner in Selcuk. She greeted me and said,
“I have good prices and I don’t have any cousins who sell carpets.” We both laughed and continued our conversation. I bought a small copper pot used to make Turkish coffee and she told me I had brought her luck because I was her first customer and had bought something quickly. Then she asked a question:

“Is your wife feminist lady?”

“Then she will like article written about me by American feminist magazine.” She was quite proud of her accomplishments, as well she should have been. 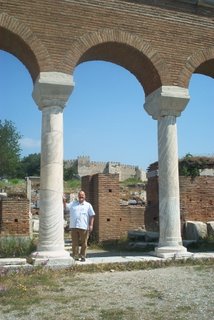 I knew I had to bring Ginger back to the shop, so I went back to the hotel and got her. Before we went to the shop we walked up the hill behind our hotel to the ruins of the Basilica of St. John, a church built over the grave of John, the apostle. Below the church we could see the rooftops of the village; above the church, the walls of the ancient acropolis. Even in ruins, we could see the lines of what must have been a majestic structure. The stones we saw were actually the second church built on the site, both of which were destroyed by earthquakes. Just in front of what once was the altar, there was a large marble slab with four columns and a small lettered cube marking it as John’s tomb. The location has been marked since the second century. We were the only two people at the site for a good bit of time. It was deeply moving.

When we got back to town, Julia showed us all kinds of wonderful stuff, served us tea, and enjoyed asking Ginger questions about being a woman and a minister. From there we walked the three blocks to the local bus station to take a minibus ride to Sirince (Sheer EEN jay), a small mountain village we heatd about from some folks at dinner last night. The village was historically Greek, but was vacated in 1924 when the Turkish Greeks were repatriated to Greece and the Turks in Greece were sent back to Turkey. The Greek Turk 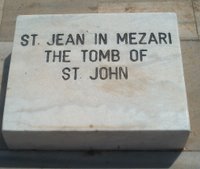 s then inhabited the village and continued the traditions of producing olive oil and wine. They make wine from grapes and fruit (more on that later).

On the bus we struck up a conversation with Sedet, who owns the Zeus Pension and Restaurant in Sirince. He gave us a card and invited us to stop by. The eight kilometer ride cut back and forth up the side of the mountain until we came to the quaint little village. Sedet got off at his place and we rode into the village center. It was lunch time, so we wandered down a couple of the narrow streets, looking in the little shops, until we came to a café that looked like a good place for a snack. Ginger said it would be a good idea to get something small so we could eat our way back to Sedet’s place.

Our server was a wonderful grey-haired man who, like everyone else we have met in Turkey, was incredibly hospitable. Ginger ordered the chicken shish kebap she has had at most every meal and our server suggested I come over and look at the mezes (appetizer 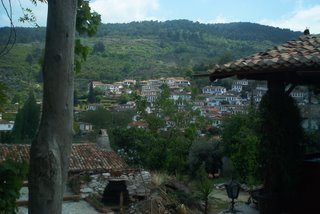 s) and make my own choices. So much for getting something small. I chose sautéed eggplant, peppers and tomatoes; a chili relish I’m still trying to figure out how to describe; cheese-stuffed mushrooms; and a small cheese pie, which was a filo triangle filled with a mild cheese, fresh dill, and scallions. I thought I was going to get one of everything. I got enough to feed us both well. And then, I found out, I had also ordered a mixed grill, which came with kofte (Turkish meatballs) and lamb cooked three ways. Needless to say, we didn’t do a whole lot more snacking.

We walked back through the small bazaar and then turned up one of the tiny residential lanes and wandered around the village until we came out, of all places, at Sedet’s place. He was sitting at a table reading the paper and drinking tea. He gave us a table with an incredible view of both the village and the valley below and sat down with us. We had a wonderful time talking and I had a wonderful time sampling his Turkish coffee and homemade baklava with dondurma, which is Turkish for ice cream (and the one Turkish word indelibly placed in my memory). From our table, we moved to a small counter where we sampled some of the various wines from the village: strawberry, blackberry, mulberry, melon, sour cherry, and red grape. They were small samples – really. The guy who served the wine was convinced I was Turkish.

“Go home and ask your family,” he said. “Perhaps they’ve forgotten to tell you.”

We rode back down the mountain and took a short nap before we went for a walk in earnest. We started down the main road, which we have come to know well, and then turned on the road that leads to Ephesus, which is about three kilometers away. We found a wonderful tree-lined walkway that was filled with all sorts of folks walking and riding bicycles. The sun was hanging low in the sky and the air was nice and cool. It was a perfect sprin 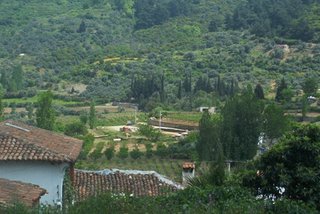 g evening. On our right were rows and rows of olive trees; on the left were the ruins of the ancient city scattered on the hillside. The rich agricultural land on which we were walking would have been the harbor into which Paul or John or Mary might have sailed. We turned around when we got to the gates of Ephesus and walked back to our hotel, ready for dinner.

Mehmet waited on us again tonight and he brought us the olive oil he promised – three kilos of it. It’s incredible. I told him people in the States were going to think I was crazy when I came back to Turkey in a couple of months just because I’d run out of olive oil. Once folks back home taste the oil, I’ll have no trouble putting my own group tour together. After dinner, and saying our grateful goodbyes to Mehmet, we came back to the room. Through our open window we could hear festive music coming from somewhere and a lot of crowd noise, so I went down to the desk to ask what was going on. The clerk told me it was a spring festival.

So we did. We walked with the masses about three blocks to a nearby park which was packed with several hundred people. At one end was a stage with big speakers blaring out music, some guys banging on big drums, and a host of girls wearing sparkling beaded outfits and doing Gypsy dances. At the other end of the park were several small bonfires. We walked over to the fires to find people, young and old, running and jumping through them. We found a small one and took our turn. Part of Ginger’s family heritage is Gypsy, so both the dances and the fire-ju 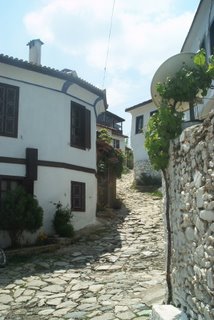 mping were things she had heard about from her grandmother. Our walk to the park was a walk into deep and meaningful memory as well.

We walked home under the moon, below the old city walls, and surrounded by the crowds and the beautiful sights, sounds, and smells of the abandon that flourishes within a celebrating community. We have walked today in the footsteps of our faith, in the heritage of our history, in the delight of discovery, all the time wading in the deep, deep river that is our common humanity. Faith, says Frederick Buechner, is a journey without maps. Ah, but with all these traveling companions, it’s not so hard to find our way.