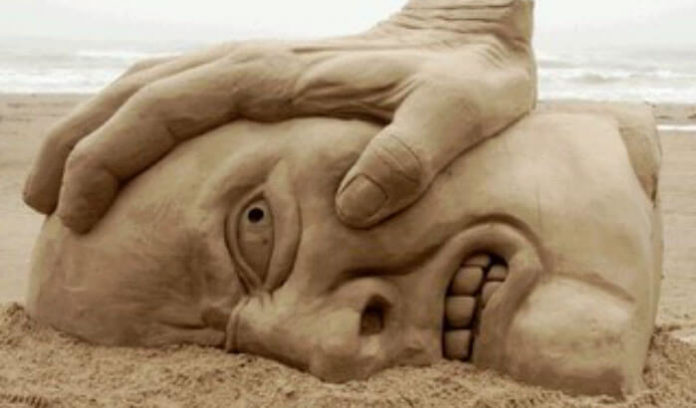 I had a dream the other night about a huge reservoir. I was standing on the banks, taking it in. I didn’t go in the water and I don’t remember much else that happened, other than I was aware that the body of water that stretched out in front of me was my anger.

As Marisa Tomei said in My Cousin Vinny, “It’s a metaphor.”

I woke up with the realization, or perhaps I should say finding words for the realization, that as I get older, I am getting angrier. I don’t mean the sort of grumpy-old-man-get-out-of-my-yard kind of mad. I mean I can feel that reservoir of anger growing in my soul, expanding its banks. I can feel the power there, the possibilities.

For someone who grew up in a family that prided itself on not getting mad, that growing lake feels like progress because there is much to be angry about.

My father grew up in a home where his father and stepmother yelled at each other. He was determined not to create that kind of home, so we weren’t allowed to yell. The lesson I internalized, which was not necessarily the one he was teaching, was I wasn’t allowed to get angry. As I learned that Jesus said, “Be angry and don’t sin,” it led me to think that perhaps anger was not the problem but a reality: we have a great deal to be angry about; we should be angry–and we should do the work to figure out what that anger can fuel or, if I stay with my reservoir metaphor, what the anger can water and feed, or even flood.

The poet David Whyte has been one of my recent teachers on anger and, I think, is perhaps the one who sent the first streams of thought that helped created my reservoir.

Anger is the deepest form of compassion, for another, for the world, for the self, for a life, for the body, for a family and for all our ideals, all vulnerable and all, possibly about to be hurt. Stripped of physical imprisonment and violent reaction, anger is the purest form of care, the internal living flame of anger always illuminates what we belong to, what we wish to protect and what we are willing to hazard ourselves for. What we usually call anger is only what is left of its essence when it reaches the lost surface of our mind or our body’s incapacity to hold it, or the limits of our understanding. What we name as anger is actually only the incoherent physical incapacity to sustain this deep form of care in our outer daily life; the unwillingness to be large enough and generous enough to hold what we love helplessly in our bodies or our mind with the clarity and breadth of our whole being.

I won’t quote the whole essay (though I’m tempted), but I will pick up at the end.

But anger truly felt at its center is the essential living flame of being fully alive and fully here, it is a quality to be followed to its source, to be prized, to be tended, and an invitation to finding a way to bring that source fully into the world through making the mind clearer and more generous, the heart more compassionate and the body larger and strong enough to hold it. What we call anger on the surface only serves to define its true underlying quality by being a complete and absolute mirror-opposite of its true internal essence.

When we think about anger, at least in its public expression, we think about rage–the way my dad thought about not yelling–so on this day in Holy Week when we have to come to terms with Jesus turning over the tables in the Temple we wonder why Jesus “lost his temper.” I’m not sure he lost anything. He wasn’t out of control. He wasn’t on a tirade. He was, to use Whyte’s words, full of compassion for those about to be hurt.

Maybe part of the reason anger grows with age is because pain and grief do as well. Sadnesses stack up over time. The aches and pains of living develop a constant level that offers a grinding reminder of our mortality every time we stand up. The fundamental loneliness of existence is more and more apparent, as does the superimposed inequity that divides us.

As I talked about this with my spiritual director last week, she led me to asking how anger could be a spiritual practice: how I could feed the reservoir, channel it?

Anger creates streams of compassion because it requires me to change in order to not be consumed. Letting the lake continue to rise breeds disaster. Flooding. Whole towns and villages washed away downstream. But a regulated river offers hydro-electric power. An irrigation ditch feeds a field. My stream of thought takes me to Norman Maclean:

Eventually, all things merge into one, and a river runs through it.

As I think of Jesus turning tables, I am mindful that he never got to feel what it is like to be old. He knew what it felt like to know death was inevitable, but he didn’t get to age. I am becoming increasingly aware as I age that I feel more isolated. A big part of that is my hearing loss: I am more isolated because I just can’t hear well. The pandemic has made apparent, or at least emphasized, that I live a long way from a lot of the people that I love most dearly and that is probably not going to change. Not being able to go see them has made the distance more visceral. As I said, grief increases with age.

Early on in coming to terms with my depression, one of the definitions offered that made sense was that depression was anger turned inward. The words don’t cover everything, but they hold a good bit of truth. This past year, I read Johan Hari’s amazing book Lost Connections where he posits that depression is profound grief. That sent resonating ripples across the reservoir of my soul. I am angry and grieving just like everyone else is one of the ways I hear Whyte’s words that anger is the “deepest form of compassion,” and it makes me think of one of my favorite passages in literature:

“Real isn’t how you are made,” said the Skin Horse. “It’s a thing that happens to you. When a child loves you for a long, long time, not just to play with, but REALLY loves you, then you become Real.”

“Does it hurt?” asked the Rabbit.

“Sometimes,” said the Skin Horse, for he was always truthful. “When you are Real you don’t mind being hurt.”

“Does it happen all at once, like being wound up,” he asked, “or bit by bit?”

“It doesn’t happen all at once,” said the Skin Horse. “You become. It takes a long time. That’s why it doesn’t happen often to people who break easily, or have sharp edges, or who have to be carefully kept. Generally, by the time you are Real, most of your hair has been loved off, and your eyes drop out and you get loose in the joints and very shabby. But these things don’t matter at all, because once you are Real you can’t be ugly, except to people who don’t understand.”

To the sentence that ends, “. . . you get loose in the joints and very shabby,” I would like to add, “and you lose your hearing.” I am angry. I am grieving. I am not alone.