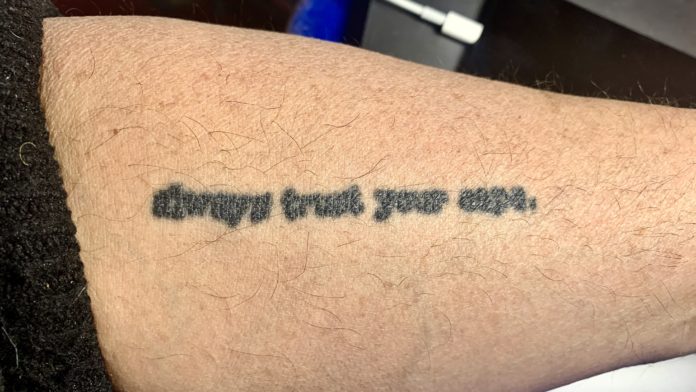 I have three tattoos.

The first one is the simplest: a semi-colon. It rests on the front side of my right arm. When I learned about Project Semi-Colon and the idea that depression is not the end of the sentence, I punctuated my life with there mark. The third one is on the inside of the same arm. It is the word courage in black with a teal period at the end of the word. I got it the week that our foster daughter started chemo as a statement of solidarity. She and the tattoo are both doing well.

The second one is a line from my favorite Guy Clark song–my personal national anthem–“The Cape,” which tells the story of a little boy who keeps climbing up on the garage convinced that he can fly. The chorus says,

he’s one of those who knows that life is just a leap of faith
close your eyes hold your breath and always trust your cape.

I wish I had gotten it in larger letters because they kind of run together at times, but I know what they say.

Some songs are like tattoos, the ink of the lyric drilled into your heart by the melody or the beat or the way the song found you, leaving an indelible work of art that transcends and transports.

Diane Ziegler’s “You Will Get Your Due” is one of my tattoo songs. I bought the record when it came out in 1995. I had no idea who she was or that the song even existed. I was struggling with my yet unnamed depression, finishing my MA in English so I could get my teaching certificate (while I was teaching full time) and wishing I could be a writer. My fortieth birthday was in sight, but not much seemed within reach. And she sang,

I wrote a couple of weeks ago about wisdom offered by a friend who said we either choose our losses or we lose our choices. On a day when I set some losses in motion in hopes of creating choices, I have spent some time both looking at and listening to my tattoos, reminding myself that the story is not over, that courage is quotidian, and I will get my due. And as I think about life in these months after my sixty-fifth birthday, I’m grateful that the kid in “The Cape” grows up:

I know I haven’t given many details. Those will follow soon. For now, if you see someone on the garage, it’s just me.