When I consider that the early Christians could have chosen any night to mark the one in which Jesus came into the world, I wonder why they didn’t pick this night—the longest night—to show, as John said, the light shines in the darkness and the darkness cannot extinguish it. Then again, marking the birth four nights into the days growing longer has its own poetry. The truth is life carries quite a mixture of both. The most beautiful parts of any day are at sunrise and sunset (though I’ve seen many more of the latter)—when the darkness and light are intermingled, the colors and the shadows are painted together, and we are presented with an ongoing circle that makes beginnings and endings unclear, other than knowing one leads into the other and neither lasts forever.

Nighttime is its own incarnate metaphor. We use it to name what is unknown, scary, disorienting, or depressing. Light is the symbol of insight and discovery, of hope and possibility. Yet, there are shadows in the daytime and stars at night.

We make a bigger deal about the days getting longer during this time of year than we do about their beginning to shorten at the end of July. We have even taken time into our own hands and acted as though we can make the days even longer with Daylight Savings. A couple of weeks after the days began to grow shorter last summer, I got a tattoo. I started to say, my first tattoo, but I think I may be done. Who knows.

I was inspired by reading an article similar to this one about Project Semicolon who said,

A semicolon is used when an author could’ve chosen to end their sentence, but chose not to. The author is you, and the sentence is your life.

As one who lives with depression, and who went through several years when it had a strong hold on me, I was deeply moved by the hope they were working to cultivate. When I mentioned it to Ginger she was unhesitatingly supportive. On the weekend of the second anniversary of my father’s death, I went to Dogstar Tattoo in Durham and asked them to mark me for life with this powerful punctuation mark because it also said something to and for me about my grief: it, also, is not the end of the sentence. 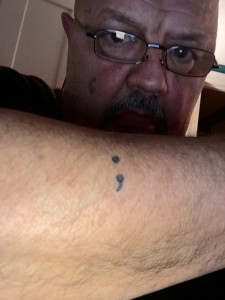 As much as I love Advent, December is usually a difficult month for me. I am not cut off from the celebration or unable to participate, but in the same way the dark and light intermingle at sunset, I have periods—minutes, hours, days—when I feel as far away from the Manger as the Magi in the desert. On other days, I like the innkeeper, have no room for the child. Ginger and I were talking today about the power of Philips Brooks’ words to “O Little Town of Bethlehem”—”the hopes and fears of all the years are met in thee tonight.” So are the dreams and failures, the loves and losses. It is not always easy to stand at that intersection because the angels are not always singing.

In these I have heard from friends about a teenager who survived a suicide attempt, some who are marking—again—the death of parents or spouses or siblings, others who are dealing with new physical limitations that limit what they can do, and then some who are coping with distance between them and those they love that they have allowed to become normal. I have friends I know who are hurting that I can get to and others I can’t. Last night, for no particular reason I could feel the weight of the dark. Ginger could see it—and even named it—but it stayed for a while nonetheless. So I baked. The kitchen remains a depression-free zone for me, for which I am grateful. However, I carried the weight to the car with me this morning, along with cookies for my coworkers. I took off my sweater when I got to work and saw the mark on my arm as I sat the bag of cookies the table. There is more to the sentence . . . .

I know it’s not as easy as that. It’s not easy at all, this life we are living. That, however, is not the last word. We are not alone; we are together; day or night, Love never lets go. 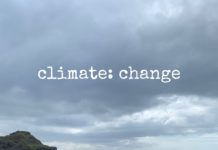