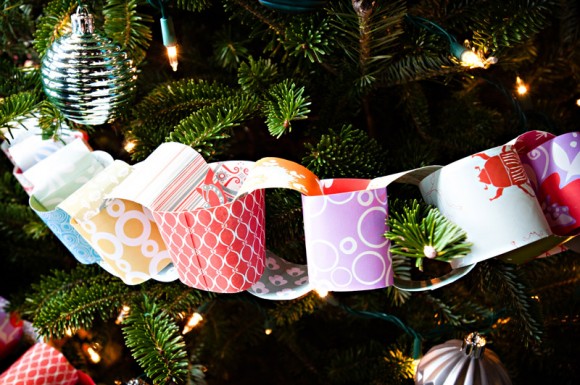 Two Sundays ago, one of the men in our church stopped me after worship and asked if I wanted 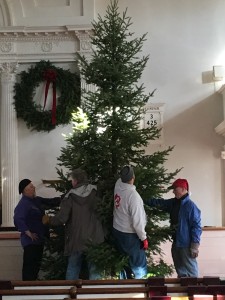 to be on the Christmas Tree Committee. Before I committed, I asked what it involved and he said, “Meet here next Saturday morning to go cut down the tree and put it up in the front of the sanctuary.” So I did. Six or seven of us went to a local tree farm that gave us access and cut down a sixteen-foot tree, brought it back on a truck, and installed it in the front of the church. Then we had coffee and donuts together. I love this committee. I think I’ll be a lifer.

The church traditionally decorates the tree with mittens and gloves and hats and scarves that are then taken to shelters and places where people who need them can find them. This morning we had some an additional adornment: a large paper link chain made by our children. Our children’s minister explained that every kid had been given the opportunity to write specific one thing they were going to do in the coming year to show God’s love to other people. Then they made the individual strips into the ornament chain that graced our tree.

Our church has two pastors, Ginger and Sarah, who alternate preaching responsibilities. Today Sarah preached from Luke 1 and the surrounding John’s birth. The more she spoke about Elizabeth and Zechariah, the more I was moved by the particularity of the story. I love the poetry of John’s first chapter—“In the beginning was the Word . . .—but the story doesn’t really get going until there are names and faces. Sarah spent some time talking about names and their meanings. She mentioned that John is the second most popular boys name, and it means gracious. Then she said, “Would it be nice if being gracious were ordinary?”

She then spent some time with the questions in Luke’s account. Zechariah asked, “What will this child become?” When Mary got word that she, an unmarried teenager, was pregnant, she asked, “How can this be?” Then Sarah added, “God’s ways are rough in this world.” The real story behind our pageants and Christmas card scenes was not easy on the participants. It is no exaggeration to say it cost them their lives. The Incarnation is more than a theological idea. It is real people encountering God in their particular lives and leaving themselves open to the reckless raging fury that we call the Love of God.

Neither Mary nor Zechariah got answers to their questions, yet somehow they both end up singing because they found Love in their particular situations. They were willing to live with love rather than answers. Then Sarah asked another question: “What lessons have you had to learn or unlearn or relearn along the way?” The one that came to mind this morning is the one I relearn most every year during Advent: as we tell the story of Love’s arrival at one particular point in one particular time, I called to remember that is the only way love comes—with hands and feet, with words and deeds. In the flesh.

In the opening song of Jesus Christ Superstar, Judas asks,

why’d you pick such a backward time
and such a strange land?

Why Elizabeth and Mary? Of all the people in the world, why these two cousins? Why Zechariah, or Mary Magdelene, or Peter? Why Judas, for that matter? Then I think of the people in my life who made love real to me and I wonder why they were at that particular place at that particular moment? Could life really be that infused with grace that the people who showed up were the ones I most needed? I don’t mean to sound as though things were engineered, or that they were somehow mysteriously led into my life. I think in those moments those people had the grace to respond to the need in front of them, and that our lives are filled with moments where either incarnate love in the particular or we don’t.

Most all of the significant relationships in my life began as incidental contact. We didn’t know where it was going, but we gave ourselves room to ask, what could this become? In similar ways, I have some important relationships that lie dormant because somehow we quit asking that question for one reason or another. Love lives in the particular, in the possibility or what might grow, of what might become of an encounter.

Zechariah could have demanded answers. Mary could have told Gabriel to pick someone else. In their own ways, I suppose, they wrote their replies and made their links in the chain. Who knows how things might have rolled out had they not chosen to say yes to Love. In the moments tomorrow, when we are called to add another link to the chain, may we continue to decorate our world in all the colors of Love. 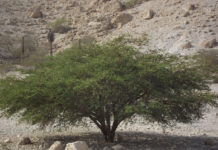