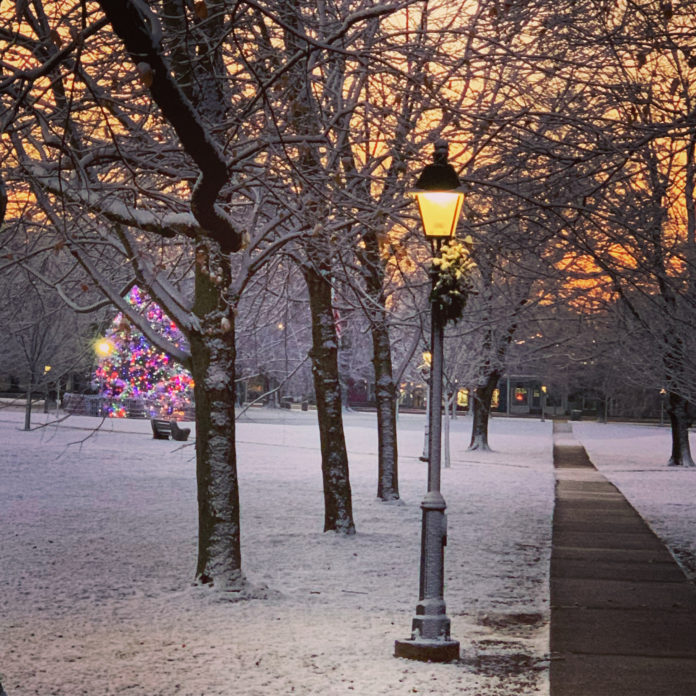 Many years ago, Ginger asked me to write a story for Christmas Eve. I wrote something called “A Faraway Christmas,” which has made an appearance on this blog a number of times. Last year, when I was the bridge pastor for United Churches of Durham, Connecticut and we couldn’t meet in person, I recorded an updated version. This year, Ginger asked me to read the story for the Christmas Eve service here in Guilford, so I tweaked it once again and retitled it “This Faraway Christmas.” I am now the bridge pastor at Westbrook Congregational Church. The story found its way into my sermon this morning.

One of the puzzling things about the gospels for me is that they give us so little information about how Jesus grew up. How Jesus became Jesus. Luke takes Jesus from zero to thirty in fifty-two verses, with one brief story when Jesus was twelve and in the Temple. Luke even says the family made the trip every year, but we only get one story.

But none of us comes into life fully evolved, including Jesus. We are shaped by our relationships and our experiences. We become, which is another way of saying we grow and change. Sometimes we are particularly marked by our experiences in ways that alter how we grow.

The book of Isaiah begins with the prophet saying, “In the year that King Uzziah died, I saw the Lord,” which is to say that the death of the king changed the way he looked at God and the world. How we learn to grieve has a huge impact on how we live in the world. We can open up or we can wall ourselves off or find a mixture of the two.

With that in mind, I want to read you a story I wrote many years ago and updated around the pandemic. It was written for Christmas Eve, but you will still be able to follow along. It isn’t about Jesus in the Temple, but it is about growing through our grief.

Since we’re scattered about on this Silent Night,
and can’t all be together to pass candlelight,

It’s hard to find Christmas–to get in the spirit
This year did have promise, but, oh, what a year it

has been: full of sadness, of violence and virus—
how can Christmas encourage, unite, and inspire us?

If we tell the old stories, will they sadden and stress us,
if we say what we miss, won’t that just depress us?

I don’t know–maybe so–but it seems worth a try
to do more than just sit by ourselves and, well, cry,

so I’ll tell you a story, though for some it’s recorded
and hope that my effort will somehow be rewarded.

“Twas a Faraway Christmas in a Long Ago Town
of no great importance and no real renown,

filled with people who seemed fairly normal to me,
who worked and who played and seemed happy and free.

They had puppies and children, ate bread and ice cream,
they went shopping and swimming, they slept and they dreamed;

they laughed and did laundry, they danced and they dined,
and they strung Christmas lights on the big Scottish Pine

that grew in the square in the middle of town,
and when Christmas was over, they took the lights down.

They read the newspaper, the dads told bad jokes,
and some of the children put cards in the spokes

of their bicycle tires, so they made quite a din
till it came time for parents to call the kids in.

Yet for all of the things that kept people together—
that great small town feeling, the Christmas Card weather—

for all of the hope one was likely to hear,
the hearts of so many were held captive by fear.

Others always felt tired, some were down or depressed,
;nd then some–put quite simply–their lives were a mess.

Some felt pressure from not having paid all the bills,
some were keeping dark secrets that were making them ill;

some felt guilty and thought they were headed for hell,
but the town seemed so perfect, who could they tell?

So everyone kept all their feelings inside,
and wished they had someone in whom to confide,

Everyone kept it in, hardly ever spoke up
until one Christmas Eve, when an old man named Buck

came to turn on the lights on the tree in the square
and found no one, not anyone, I mean no one was there.

He stared up at the tree and the lights shining bright,
and alone on the square he talked back to the night,

“It’s Christmas,” he said, “when I should feel warm,
but I don’t think that this year I can conform.

It’s been hardly two months since my friend passed away;
how can I smile when he’s not here to say,

’Merry Christmas’?” And right then he burst into tears,
and all of the sadness from all of his years

Came out of his eyes and ran down his cheeks,
And he thought he would sit there and just weep for weeks.

Buck looked up at the voice and the kindness he heard
Somehow she had helped with just two or three words.

She wasn’t quite ready for the truth that he told,
but it helped her feel brave standing there in the cold.

“Thanksgiving was lonely, my birthday was, too.
I guess I could say that I feel just like you.”

So they poured out their hearts, like a sister and brother,
then someone else joined, and then came another,

with a story to tell and feelings to free,
and they all sat and cried ‘neath the big Christmas Tree.

Can you imagine how many tears fell,
after all of the years that no one would tell

how it hurt just to live, how they felt terrified
of saying out loud what they carried inside.

How long does it take to clean out your heart,
to get it all out, to make a new start?

They cried until daybreak, till the first rays of dawn
broke over the tree tops and spread ‘cross the lawn,

in the new morning light Buck could see ‘cross the square;
he smiled up at Jenn ‘cause the whole town was out there.

They had come through the night, first one, then another
to sit down together like sister and brother,

to pour out their hearts for the first time in years,
and let out their feelings, their sadness, their tears.

Jenn started a carol, the one she knew best,
about joy to the world, and it burst from her chest.

everyone sang along, both the sad and the scared,
Because true friends are found when true feelings are shared.

Perhaps it’s not fair to tell you this story
since we’re all kind of trapped in a strange purgatory;

the holiday’s here and we can’t be together
around a big tree in some Christmas card weather;

we can’t drop our masks to sing Silent Night,
or turn to each other to pass candlelight,

our world is no different: we’re frightened and sad,
we feel helpless and hopeless, and certainly mad,

but none of those words is the last on this Night
that we wait for the Child, that we pray for the Light,

that we hope for the best, even stuck in our homes,
and we try to remember that we’re not alone.

The virus and violence will not define us,
and our grief and our sadness will not resign us;

we’ll find ways to say that we love one another,
though we must keep our distance and our faces are covered.

The walls that surround cannot keep us apart
if we speak truth in love and we open our hearts.

We are all full of feelings, these are difficult times,
but let’s see past the sorrow and look for the lines

that connect everyone, even if we can’t touch;
let’s look for new ways to say “I love you much.”

Our hopes for this year may have turned to dismay,
but that doesn’t mean Christmas is so faraway.

There’s a scene in the second book of C. S. Lewis’ Chronicles of Narnia that stays with me. The children had returned to Narnia for a second time and Lucy saw Aslan, the lion—who is the Christ figure in the book–and ran to meet him.

The great beast rolled over on his side so that Lucy fell, half sitting and half lying between his front paws. He bent forward and just touched her nose with his tongue. His warm breath came all round her. She gazed up into the large wise face.

“That is because you are older, little one,” answered he.

“Not because you are?”

“I am not. But every year you grow, you will find me bigger.”

When we grow, God gets bigger. I keep coming back to that truth in these difficult days, because the weight of these times makes tempting to hunker down with a smaller God that sees me as the center of the universe. But God grows bigger in our grief and uncertainty when we are willing to share them with one another—because that is the way we grow: together. Amen.