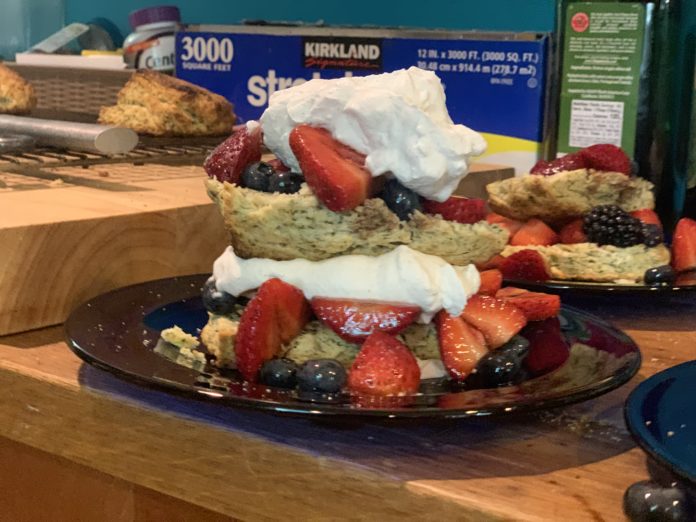 Strawberry shortcake has been a Fourth of July tradition at our house for a long time. The recipe comes from my great grandmother–my father’s grandmother–who died not long after I was born. When my mother asked my father what recipes he wanted to make sure she knew how to make, he said, “Ma’s strawberry shortcake.” My mother went to his grandmother to ask for the recipe and all she offered was a list of ingredients and instructions like, “Add two glugs of oil.” (You turn the bottle over and let it “plug” twice.”

When we lived in Kenya, our house was around the corner from a strawberry farmer and we had shortcakes fairly regularly during harvest time. Mom made them so large that they were the meal, not the dessert. And she always brought the mixing bowl of leftover whipped cream to the table.

One night, my mother, my brother, and I were finishing dinner (Dad was out of town), Miller was slopping the spoon in the whipped cream when he looked across the table and caught my mother’s gaze.

“Don’t you dare,” she said, and as she finished speaking a dollop of whipped cream hit her right between the eyes. Nobody moved. She didn’t say a word, and she didn’t wipe the whipped cream off of her face as it slid down her nose and chin. She picked up her spoon, reached in the bowl for a scoop and threw it back at my brother. Then we started laughing–and we had about five minutes of the best whipped cream food fight ever known.

I love this recipe.

Over the years, I have adapted what was handed down to me. I put fresh basil in the shortcakes (they’re sweet biscuits, really), add a little cinnamon to the whipped cream, throw some blueberries in, and macerate the berries in sugar, lemon juice, and a little balsamic vinegar.

And I still bring the extra whipped cream to the table–unless my brother is in town.

Start with the berries. But first, put your mixing bowl and whisk from your stand mixer in the refrigerator until you are ready to make the whipped cream.

Macerating means softening the berries with liquid, and the process is simple, though the word makes it sound far more violent than it deserves. Start here and let the berries rest for about thirty minutes to create a lovely syrup.

Combine the dry ingredients and then cut in the butter until the mixture looks like small pebbles. Add the milk and mix (by hand or with a wooden spoon) until if forms a dough. Don’t overmix. Dump the dough out on a lightly floured surface and roll to a rectangle about a half–inch thick. Cut into eight pieces and place on a parchment lined baking sheet. Bake for 12-15 minutes, or until tops are browned.

And now, the whipped cream.

I don’t make the whipped cream until I am ready to serve the shortcakes. When you are ready, take your mixing bowl and whisk out of the refrigerator and add the ingredients. Take plastic wrap and cover the top of the mixing bowl so you don’t inadvertently redecorate your kitchen. Turn the mixer on high and let it whip until the cream looks the way you like it.

Since I am headed to youth camp with Wilshire Baptist Church this week, we had our shortcake on Saturday. It won’t be the last time this summer. 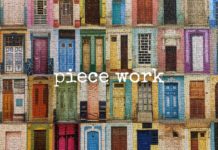