I spent some time in the yard today. Weeding. We were promised more rain this afternoon, so I tried to get out 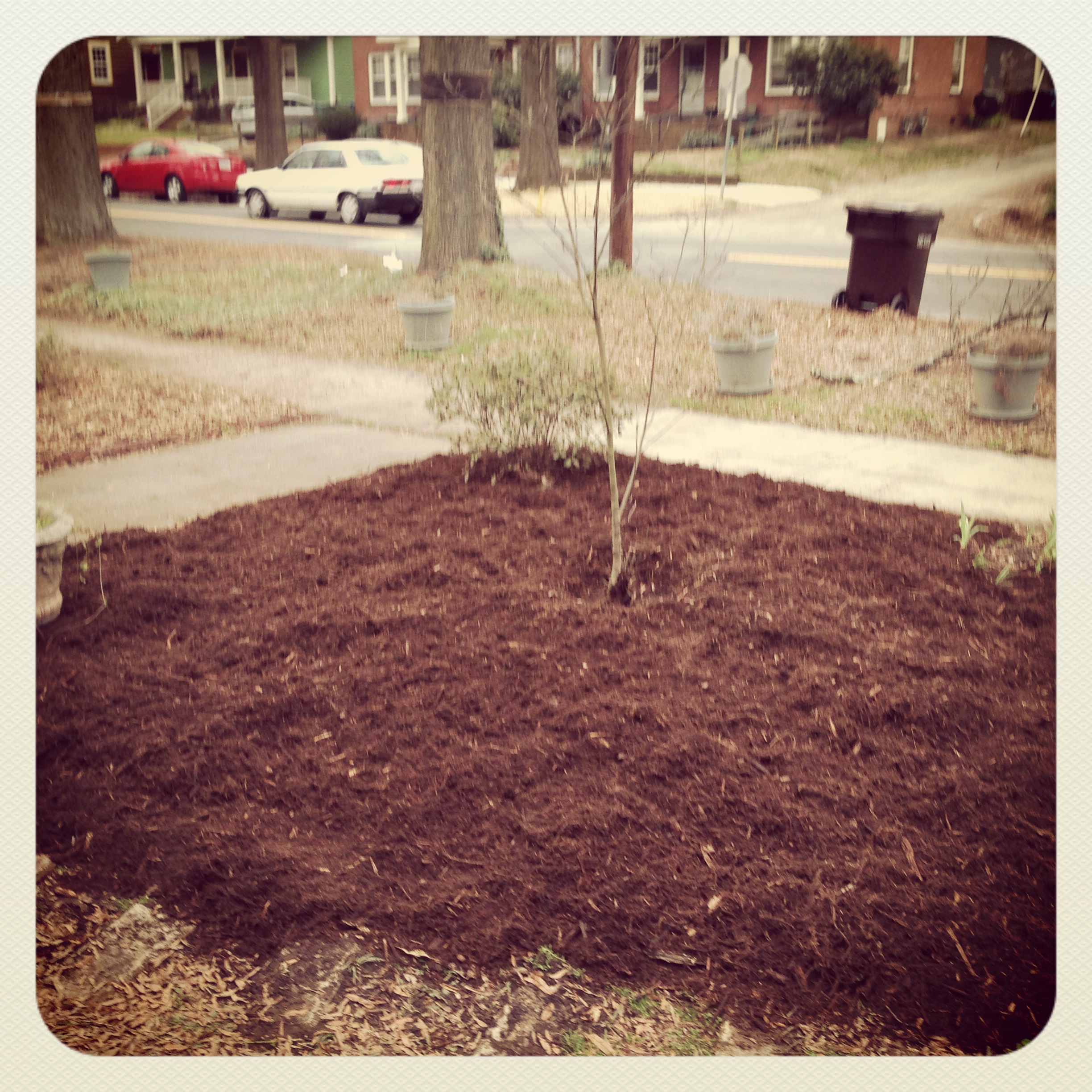 ahead of it to weed the side of the front yard around the dogwood we planted a little over two years ago in memory of Reuben, my father-in-law. I learned the hard way last year that if what looks like little clover leaves get too big they have these nasty, sticky seed pods that almost require you throw away whatever you’re wearing when you pull them up. This year I was determined to get them early. And I did.

My plan was to do more than pull them up. Once the ground was cleared, I put down a layer of cardboard and then I covered them with about four inches of mulch. The result was happy trees and a good looking yard, even though I know the weeds are already plotting their response, for, you see, I did good work, but I did nothing permanent.

When I started back in therapy after my depression hit in the fall of 2001, my therapist asked if I liked to garden. I had not done much of it to that point other than fill container boxes around our row house in Charlestown, but by then we had moved to Marshfield and we had a yard. That next spring, Reuben and I dug holes and planted trees in the front yard, moved a stand of lilac bushes from the back to the front, clearing the way for a vegetable garden. I found pleasure and meaning in the work — a reminder of my finitude and a connection with something more eternal all in the dirt under my fingernails.

What my therapist explained (with some scientific backing) was there was something physiological as well as spiritual that happened in my digging in the dirt. Whether it was the chance to get close enough to the ground to ingest some of the minerals and bacteria from which I was mostly removed, or simply to connect to the stuff I was made of (dust to dust, remember?), weeding and planting raised the floor on my depression and lowered my blood pressure.

There’s more. To pay attention to what I was planting meant I had to tell time in seasons, to listen to the weather for more reasons than what I should wear, and to understand I was doing nothing permanent. Whatever I was doing was going to be undone or covered over. The vegetables live only for a season; others have to be pruned and fertilized. And then, of course, there is the weeding. Something is always growing even as something also is dying or fading away.

This summer will mark four years in our house, which means close to that many layers of cardboard and mulch in the yard. I use cardboard because it turns into soil, along with the mulch, which means every layer improves the soil and makes it better for other things to grow. Many of the cardboard layers have come from the computer store where I work because we have loads of it all the time and they are happy for me to take it with me. The cardboard layer this year came from boxes I saved from last summer when I drove a U-Haul truck from Waco packed with stuff handed down from my parents and grandparents that needed to find a new home because my parents and moved into a smaller place. It also happened that the day I packed the truck was the day after my dad had his stroke.

I began unfolding the boxes and couldn’t help but read the labels as I laid them down on the ground:

Indeed. For a fair part of the fall, a good portion of our living room was full of the very boxes I was putting down in the dirt. We unpacked layers of family history: blankets Mom had crocheted for me in Africa, cufflinks Dad had bought in Africa, old sermons, all kinds of kitchen things, my grandmothers’ cookbooks, my dad’s parents’ wedding gifts. These were the layers that have fed my life, helped to make me, well, me.

And today those boxes became a layer of preparation, of protection, of perpetuation. They will decompose and go back into the ground, an undetected layer of memory and meaning, something through which new things will grow, something that will be layered over. While I was working, a little girl kept riding up and down the sidewalk on our street, complete with pink bike helmet and training wheels. At first, she just stopped and watched. About the time I started spreading the cardboard she showed up again and this time she talked to me. I don’t know her name. I know she lives a couple of houses down. I loved that she felt safe riding on our street and I felt a little worried at the same time. She asked why I was putting boxes in my yard and I did my best to explain what I was doing. She returned to inquire again when I began dumping the mulch and I described what the layer of smelly brown stuff would do.

I didn’t give her the whole story about faith and futility, about weeding and wondering how long before the weeds come up again. She’ll find out soon enough once the training wheels come off. And she’ll learn, I hope, how to tell time by dust and ashes, by seasons and seas, by friends and family, and by mornings when the best there was to do was ride your bike down the sidewalk and wait for the rain.