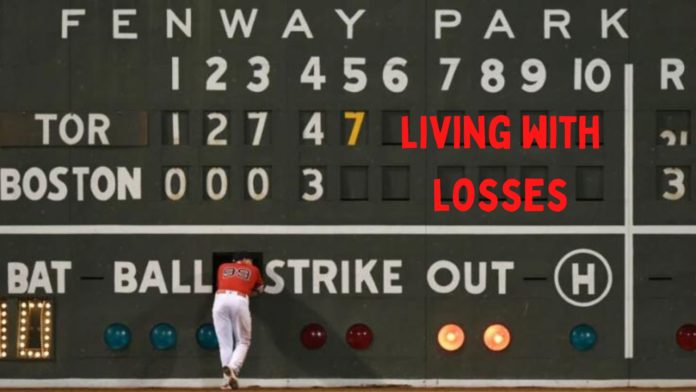 It was already over by the time I got there.

Ginger and I went to dinner with some folks and I turned on the Red Sox game when we got home, as I am wont to do on a summer evening, to find that the score was 14-3 in favor of the Toronto Blue Jays. And it was only the bottom of the fourth inning. Since it wasn’t close, I went upstairs to do a couple of things and when I came back down one inning later it was 25-3–at the halfway point of the game. By the time the game finally ended, it was 28-5.

The scale of the loss broke a ninety-nine-year-old club record.

But the thing about baseball–and life–is you have to play again tomorrow. Last night was the first game of a three-game series with the Blue Jays, so they all showed up again this afternoon and the Sox lost once more, this time only 4-1.

The Sox have played ninety-five games and have lost forty-seven of them. They have faced a whole lot of days when they just had to get back out there, but last night came on the heels of two losses right before the All Star Break, 14-1 and 13-2, both to the Yankees.

As epic a loss as it was, the game ended. The destruction endured for only nine innings. Same with the loss this afternoon. Tomorrow a new game begins at 0-0. Game to game, the scoring is not cumulative. Life will go on. They will play again tomorrow and the days after that, both winning and losing until this season fades into the next. All of that is true. And they will from now on be the team that lost 28-5. They have to live with that loss. As a fan–and I will always be a Red Sox fan–I get to live with it, too.

But the losses add up. Boston has won one more game than they have lost this year, which puts them in fourth place in our division and makes us a long shot for the playoffs. Living with losses does have a cumulative effect. Each day starts new, but it doesn’t always feel like the score is 0-0. We have debts that weigh heavily, obligations that have already spoken for our time, things that need to be done and left undone. In many ways we live in the aftermath of destruction and with the consequences of not performing.

And still, there is grace. Grace to live with and through and, perhaps, beyond our losses.

I grew up with a father who thought sports were the quintessential metaphor for life. As one who was and continues to be an amazingly mediocre athlete, I remain wary of drawing too straight a line from competition to circumstance. Life and sports are not analogous because life is not divided between winning and losing.

After the game on Friday, manager Alex Cora said, “I would like to say that this happens, but it doesn’t happen often. We’ve just got to turn the page and get ready for tomorrow. That’s the only way you can attack the next one.”

I know of too many specific things happening in the lives of people I know and love that make me want to state emphatically that life’s pages don’t always turn that easily. We live through moments and events that create a Before and an After, that alter who we are and what choices we can make. The page we turn to is not blank, and it does not erase the story that has already been written. Cora’s right: those things don’t happen often, but they happen and we have to live with them.

And we do. We live with them, through them, beyond them. And we don’t get over them. We are the sum of our losses, but they are not all of who we are.

When I started this post, I thought I had an idea of where I might end up, but I feel like I have lost the idea much like Jarren Duran lost the fly ball in the twilight that led to an inside the park grand slam for Toronto. Then again, perhaps to say we live with losses and all is not lost is worth saying, even though it doesn’t tie everything up neatly.

We are all living with losses. Let’s keep pulling for each other.