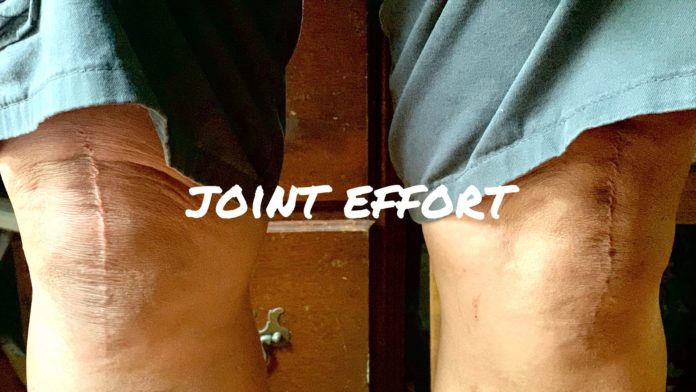 Though they got me up hours after I came out of recovery to start walking and had me climbing stairs the next day, the recovery from the surgery is hard work and takes a long time. Everyone who had knowledge about the surgery gave me the same advice: go to physical therapy and do everything they tell you to do. I did and it both helped and hurt. I had a new understanding of Jesus’ question to the man who had sat beside the pool at Bethsaida waiting to be healed–“Do you want to get well?”

Healing, often, is not for the faint of heart.

And, sometimes, healing happens when you don’t know it.

The first week of July I went to Youth Camp with the folks from Wilshire Baptist Church, Dallas, a group of folks I love and who love me. Camp is one of my happy places, and Wilshire’s camp has been my home for something like twenty summers. We were at a campground in Arkansas, a little west of Little Rock, and it was hot and humid despite the rolling hills and tall trees.

Last summer at camp, I was two months away from the surgery and had a fair amount of consistent pain. My room was in a building about a quarter of a mile from the meeting room, and up hill; I struggled to get back and forth. This year, retracing those steps gave me a visceral understanding of how the surgery had helped because it didn’t hurt to walk.

After my first surgery, my doctor told me to expect to make good progress, but to understand that it would take a year before I forgot I had had the surgery. He was right almost to the day. My second knee seemed to respond more quickly, but it still stiffened up when I sat or stood too long, and bending my knees to reach something on the floor or a low shelf remained challenging.

Because the afternoons at camp were so hot, I stayed at the pool, as did a fair number of the kids and adults. I also spent a good deal of time just sitting in the water talking with those around me. The second afternoon I realized I was crouched down in the water, which was about four feet deep, almost sitting on my haunches and I felt no pain. The next afternoon, I made a point of doing deep knee bends and squatting down some more.

What I remembered was that being in the water was a kind of no-gravity situation; I could bend my knees without resistance. I had waded into healing waters without knowing that was what I was doing. I was just looking for relief from the heat.

When I got the invitation to go to camp I had already given my notice at work. My last day was on a Thursday and by Sunday night I was in Arkansas. The timing felt providential. I went not only hoping to offer something to the kids there but also hoping for healing since camp is mostly about reminding ourselves that we are wonderfully and uniquely created in the image of God and worthy to be loved. I knew I needed the message as much as they did. Maybe more.

I also gained a greater range of movement.

In the story of the man at the pool, the whole set up is that everyone gathered around the water waiting for an angel to “stir up the water” and then whoever hit the pool first was healed. The man Jesus encountered had been there for thirty-eight years and had never managed to get in first.

I don’t know how many people were there on a daily basis, but I am struck by the fact that they were together but all alone. No one was helping anyone else, they were caught up in pushing their way to the front. Imagine if they had had the wherewithal to say, “Let’s line up and we will help each other in, one at a time, day after day.” Yes, some would have had to wait longer than others, but no one would have waited thirty-eight years. And, as they worked together, they might have been surprised at the other things in their lives that were healed.

This summer marks the first summer I have been able to work in the garden and get up and down without groaning loudly. Most every time I bend my knee is an exercise in gratitude, for my surgeon, for Ginger, for my physical therapists, for others who cared me, and for those who sat and talked to me in the pool at camp where we disturbed the waters and was healed by surprise.