We knew we had a tour today, we just didn’t know where we were going.

When I planned the trip with the help of Tovi from Kirkit Travel, he made some suggestions about tours and, after checking out the links he sent, I signed us up. That was several weeks ago. All I knew, looking our voucher, was we were going on the “Cosmopolitan Istanbul” half day tour. When we got 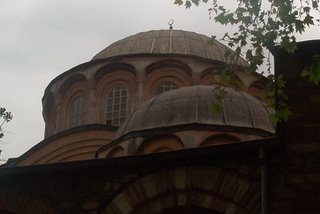 downstairs to meet whomever was going to pick us up, we had two pleasant surprises: we had signed up for a private tour and we were going to visit Greek, Jewish, and Turkish neighborhoods and points of interest. We climbed in the van and off we went.

Our first stop was the Eyup Sultan Camii, or the Mosque of the Great Sultan, who was the standard bearer for the Prophet Mohammed. Across the courtyard from the mosque is the tomb of the Sultan; both sites are significant to Turkish Muslims. Our guide, Gulden (pronounced GOOL-dan) was a lovely person and a wonderful source of information. She was also delighted to talk about her faith and her heritage as a Muslim. Part of the reason she took us to this mosque was because it was off the beaten tourist path and in a more traditional Muslim neighborhood. As we stood in the back of the mosque, the main floor filled with men coming to pray. The sense of reverence was quite different from the Blue Mosque where the tourists far outnumbered the worshippers. 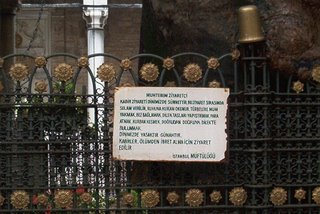 outside of the entrance to the tomb. Gulden translated it for us. It said something to the effect of “Don’t pray to the dead Sultan; you can only pray for him. No candles. No flowers. No strings or ribbons. No pieces of paper with messages. Don’t ask the Sultan to do anything for you. This is forbidden in our religion. You can only pray to Allah.” When we went inside, a number of people were kneeling or sitting around the walls. Some were reading out loud, though softly; others were praying. I wondered if they had read the sign. Most seemed determined to do or pray whatever they wanted, or at least that’s the way it felt to me.

From there we went to the Chora Church (The Church of the Savior Outside the City Walls), which is now the Kayrie Museum. This church was out of the way, even during the Fourth Crusade when the Crusaders sacked Constantinople, so it was not raided or damaged. Though the Ottomans plastered over the mosaics and turned it into a mosque, they did not destroy the artwork. The Turkish Repubilc uncovered the mosaics and turned the church into the Kayrie Museum. Gulden did a wonderful job showing us how the mosaics on one hall told the life of Mary and those on the other hall followed the events in Jesus’ life. Thus my next surprise: the life story of Mary, as it was told in these scenes, was one I had never heard. There were images of Gabriel’s annunciation of Mary’s birth to Ann, her mother; of various signs from Mary’s childhood; and of several other events that made her border on divinity. So much for being a lowly peasant girl.

Our next stop wa 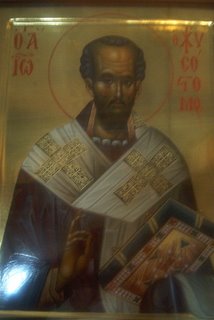 s the traditionally Jewish neighborhood of the Old City (the part inside the city walls from the sixteenth century). Up until the last few years, Turkish, Greek, and Jewish neighborhoods connected to one another quite well. The neighborhoods are still there, but many of the Greeks and Jews have relocated to the northern part of the European side of Istanbul and these neighborhoods are mostly poor and a bit rundown. There are still some synagogues there, but because of bombings in 2003 security is extremely tight: you have to make a specific appointment that has to be approved by the rabbi in order to visit them. We didn’t have such a connection, so we walked a bit and ended up at the Orthodox Patriarchy in the adjacent Greek neighborhood and visited the church there, which is still active. Inside was yet another surprise: the relics (bones) of St. John Chrysostom and St. Gregory Nyziansus are ensconced there. Gulden said they were returned (from Britain, I think) about two years ago. Both are significant early theologians and names I have become even more familiar with as I have learned to write icons and learned more about Orthodoxy.

We said our goodbyes to Gulden about one-thirty and spent the afternoon roaming around on our own. We crossed the street and entered the Basilica Cistern, built by the Roma 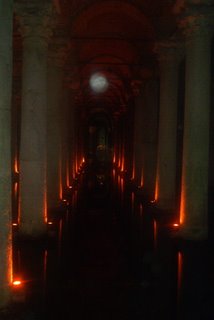 ns. We had no idea what we were going to see. I was expecting the equivalent of a big well. What I found was a huge underground cavern supported by beautiful Roman columns (the whole thing was twelve rows of twenty eight columns, each twenty seven feet high). They were playing wonderfully atmospheric music as we walked the wooden platforms through the cistern. Once again, I was surprised. When we came out we were hungry, so we stopped at the first restaurant we came to, which was a tourist trap and surprised us with how much they wanted for their food. We then wandered through the Grand Bazaar, a marketplace dating back centuries – and also a tourist trap — that stretches for blocks and has grown and morphed to presently house over four thousand little shops, all of whom have the best prices and, as one of them said, will be happy to help you spend your money. The instructions the guides give are to ignore the barkers and salespeople. If you act like they are not there, they will leave you alone after a bit. Ignore them long enough and you become numb to their presence.

We got out of there quickly, after feeling as though we had gotten a taste of what it was like, and found our way to Cidgem Pastanasi, a bakery and pastry shop recommended by the folks at Lonely Planet. We sat at a sidewalk table and I had some of the best baklava I have ever tasted. My senses were restored.

We decided to start back to the streets around our hotel, which are in a little bit more economical section and inhabited by both Turks and tourists living on a budget. We bought things in two shops where the shopkeepers were not hard sellers and the prices were fair (another surprise) and ended up for dinner at Doy Doy (another Lonely Planet suggestion and two blocks from our hotel) where we both ate for less than what it cost to feed one of us at lunch. By the time we finished dinner and began walking home, the calls to prayer were pealing out once more. Gulden talked about the origin of the prayers five times a day, accompanied by ritual cleansing and body positions as one prays, coming out of life in the desert. The washing of the hands, feet, head, ears, and neck three times before praying would have refreshed the desert traveler; the prayer positions would have served as stretching exercises: the practice of prayer was a way to stay healthy in more ways than one. Here, far away from the desert, few seemed willing to stretch their muscles, both physical and spiritual.

For all of the day’s sur 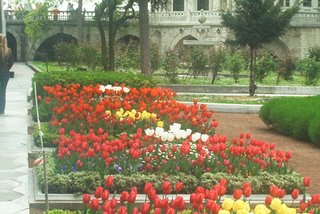 prises, what we noticed most was not new to us or new to the world. “Earth’s crammed with heaven,” wrote Elizabeth Barrett Browning, “And every common bush afire with God; And only he who sees takes off his shoes; The rest sit round it and pluck blackberries.”

She’s right, you know; I saw her words become flesh right before my eyes.