We have had wonderful guides on this trip. Betty, who took us all over Greece, knew more about well, everything than most anyone I have encountered. She was a fount of knowledge. Alsi, who showed us around Istanbul our first day, made us glad we had come. Gulden showed us parts of the city we would not have otherwise encountered. We’ve had some great people show us some great things – until yesterday.

We signed up for a trip up the Bosphorus, along with a few other stops. Hadil was our guide. We still got to see some great things, but Hadil, for reasons known only to Hadil, phoned it in. He was not rude or bitter, just detached. He didn’t appear to have any particular attraction to us or the things he was taking us to see. And he took us to see some great things. Part of the disappointment for me was I’ve gotten quite used to feeling some connection to the folks who have showed us around. I like the human connection as much, or maybe more than the historical one. He never gave us a chance to make him part of our memory.

The Bosphorus is the body of water that divides Europe and Asia and connects the Sea of Marmara to the Black Sea. Istanbul sits on both sides. The name comes from Greek mythology. The story, as told by the Lonely Planet guide is worth quoting: 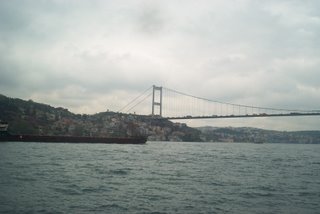 “Bous is cow in ancient Greek, and poros is crossing place, so ‘Bosphorus’ is the place where the cow crossed. The cow was Io, a beautiful lady with whom Zeus, king of the gods, had an affair. When his wife Hera discovered his infidelity, Zeus tried to make up for it by turning his erstwhile lover into a cow. Hera, for good measure, provided a horsefly to sting Io on the rump and drive her across the strait. Proving that there was no true justice on Olympus, Zeus managed to get off scot-free.”

Now you have a story to tell at your next party – unless it’s at our house. As old as this city is, there was not a bridge across the Bosphorus until 1973. The population has, and continues to move back and forth using a fleet of ferries that go across the strait while 100,000 ships a year move up and down the waterway. We were on the water for a little over an hour and got a wonderful view of the city.

After lunch we went to the Dolmanbace Palace (pronounced Dol man BACH ay), which was built by Sultan Abdul Mecit to show that the Ottoman Empire was neither in decline n 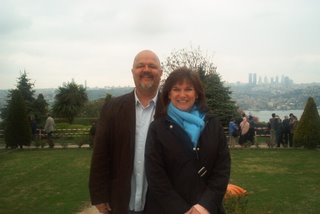 or broke. By the time he finished building the palace, the Empire was bankrupt from paying the construction costs and struggled to last through three more sultans before hanging the “Closed” sign on the palace gates. When Turkey became a republic in 1923, the new president, Kemal Ataturk, used it for official functions, as it is still used today. He died in the palace at 9:05 a.m. on November 10, 1938; the clocks were all stopped at that moment and have never been wound again.

After we left the palace, we crossed the bridge to Asia. For about a half an hour, we were on another continent – the same as everyone from Karachi to Calcutta to Canton. During our time in Asia, we had our picture taken and drank a cup of tea. Ah what a lovely continent!

An intercontinental visit was not the highlight of my day, however. The first thing we did was the best thing for me: we went to the Spice Bazaar, which is an L-shaped building about three or four hundred yards long filled with small shops selling spices, dried fruits, and even Turkish Delight (which is not as evil as C. S. Lewis would have you believe). I had fun moving from shop to shop, asking questions, tasting samples, and buying spices. Ginger had fun taking pictures of me while I was in Spice Heaven.

At the end of the day, Hadil dropped us off there again so we could get a bit of a walk in before we got back to our hotel. We moved across the section of the city with which we have become somewhat familiar, up small alleyways filled with shops, along large streets lined with shops, and found our way back to the Tashkonak to say goodbye because we had a flight to catch.

Just an hour in the air put us in Izmir, a much smaller city south of Istanbul. An hour’s drive landed us in Selcuk (SEL chuk), a much smaller town than Izmir and the modern town closest to what was once Ephesus, where we are going tomorrow. (Here’s a question: how can Turkish Airlines manage to serve a small meal with choice of sandwich or salad on a forty-five minute flight and our American airlines claim they can’t afford more than peanuts no matter how far you are flying?) The guy who picked us up at the airport in Izmir didn’t speak English, so we rode with him and his girlfriend on a mostly moonless night down highways we knew nothing about to a place we could barely pronounce. All we could see were the same stars we see standing on our back deck in Marshfield.

When we checked into the Kalehan Hotel, we asked if the restaurant was still open. They said we could get small things, or, if we wanted more, they would call the cook to come back because he lived nearby. It was ten o’clock. I couldn’t live with myself if I made a fellow cook come back to work in the middle of the night. Ginger and I ordered the cheese and fruit tray. While we were eating, a little kid who is just learning to walk managed to introduce us to her parents, an American man and a Japanese woman who live in Slovenia. They have been here several days and are going to Istanbul tomorrow. We swapped stories and recommendations. By the time we finished eating and took a walk out into the courtyard, the quarter moon had risen above the fortress walls on the hill above the hotel. It reminded me of one of my favorite Emmylou Harris songs:

Quarter moon in a ten-cent town
It’s time for me to lay my heartaches down . . .

That’s where we are tonight. I can’t believe what we ‘re getting to do. Today I straddled two continents; sailed on one of the most storied waterways in Western civilization; gathered spices in an ancient bazaar in one of the world’s largest cities; and rode through the night to a place Paul came to start a church, the place Mary, Jesus’ mother is said to have lived out her days; and the place where John, the apostle, died. I never expected to be able to see any of these things. Grateful is not strong enough a word, but it will have to do.