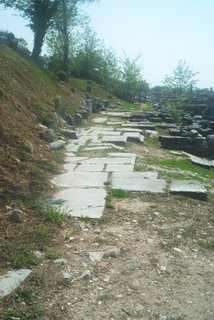 Just three days in, our mornings are beginning to take on a regular routine: up at 6:30, breakfast at 7:00, on the bus at 8:00. Most of our group was moving slowly yesterday, but we still pulled away from the hotel by about 8:10. We wound our way out of Thessaloniki and on to the modern day Ignatia Way, which runs closely to the Roman Via Ignatia, which was a highway that ran from Constantinople to Rome (when it got to Italy it was called the Appian Way.) We drove on a four lane highway; Paul walked on a stone pathway about twenty feet wide. We drove about three hours to the ruins of the ancient city of Phillipi, where Paul helped start a church.

The first place we stopped was just outside the ancient city where Paul is supposed to have baptized Lydia, the first European convert to Christianity. We had a devotional time there. Mike, one of the pastors, invited us to remember our baptismal vows as I sang,

As we gathered, we co 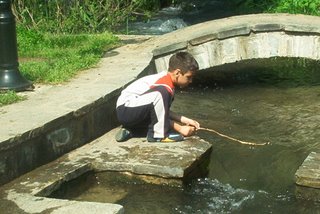 uld hear the priest chanting in the baptismal services taking place in the church just above us. The “name day,” or baptism day, is very important in Orthodoxy. Two girls were baptized while we were there: Emma and Natalia. We even talked to one proud grandfather and a couple of folks on our bus came back with snacks from the reception after the baptism, to which they were spontaneously invited. I loved thinking about the gospel coming to Europe through a woman and a weaver of purple cloth.

One of the points Bettty made several times was Paul’s visit to Phillipi marked the coming of Christianity to Europe. When he crossed over from Asia Minor and landed at Neapolis and then came inland to Phillipi he was making history even he did not understand. He had a dream where a man asked for him to come to Macedonia and help, so he went and, in doing so, introduced Europe to the burgeoning faith. Though Peter gets credit for having the keys to the Kingdom and being the first Pope, Paul is the reason there are churches all across Europe. 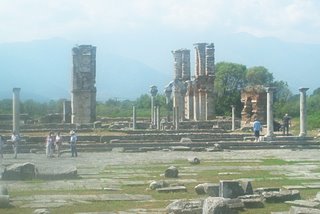 but ruins. We stood in the agora and the market place, and among the ruins of two huge churches, but there is nothing more than fragments of stones bearing fragments of Latin inscriptions laying all across what once was a vibrant and essential city. The primary reason for its abandonment was bad timing. An earthquake all but destroyed the city not too long before the Ottomans invaded; they saw no need to rebuild the city and focused instead on nearby Karvalla, which is still an active city. In almost every place we have visited, Betty has pointed out things that were destroyed by earthquakes. This is a very seismically active region, even today. When Ginger asked Betty when the last earthquake was, she said, “Oh, a couple of months ago we had one about 4.9 just outside of Athens.” She talked about it like we talk about a Nor’easter: it’s bad, but it’s one of those things that comes with living in New England.

One of the places we saw in the Philippian ruins that was quite well defined was the Vema, which is the place Paul would have argued his case when he was brought before the magistrate. According to Luke, we stood at the place where Paul told them he was a Roman citizen and could not be beaten without a trial. He and Silas were imprisoned and then set free – by an earthquake, though Paul refused to leave until he got an apology. 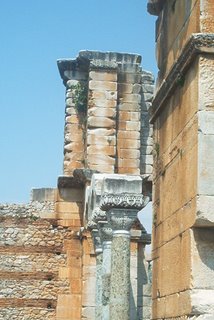 the Philippian church. They brought him great joy. Ginger said at one point today, “The way Paul felt about the Philippians makes me think of the folks in Marshfield and the ways they are so kind and loving to me.” That may have been the best connection of the day for me. The other was the sense of calm I felt walking among the ruins. Betty did a great job restoring the scene with a verbal picture of what had once stood where we saw only pieces of pillars and stacks of stones. She showed us the excavation of an athletic venue underneath the church, which had been partly unearthed. No one has even come close to uncovering all that lies in the dirt there. Yet, no one is digging any more in Philippi. They have moved on to other places; they have other priorities. What they have uncovered has given us a brief glimpse of what once was and a chance to brush up against those who had come before us. I’m not sure why that’s so calming, but it is.

Centering may be a better word. I’m a little over six months away marking my first half a century on the planet and walked today where Paul walked forty of my lifetimes ago, as he walked over ruins of those who had been there six or eight lifetimes before that. Two thousand years feels like a close connection when I think of it as forty lifetimes. We have accumulated more than two thousand years of living just by adding up the ages of the people riding on our bus. Stretched out over centuries it is a long time; imagined as a connected web of human existence it is not so far away.

We wound our way down to the Aegean Sea and ate lunch in the port city of Neapolis, where Paul landed. We had another great meal – fish today, freshly caught – and then traveled back down the Ign 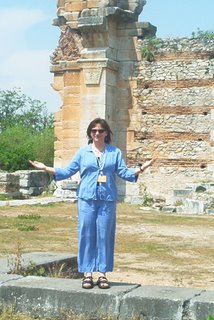 atia Way (this time in the same direction Paul went) to Thessaloniki. On the way home, we stopped at the same roadside restaurant for coffee as we had on the morning trip. When I stepped up to the counter, the server said, “Hallo, Milton!” He read my name on the tag around my neck. His name was George and he makes a damn good cup of coffee – kaffe magala: coffee with milk. “Effaristo,” I said. Thank you.

After dinner, a group of us decided we would walk down to the harbor to see where Paul landed on one of his later journeys. The Greeks eat dinner between nine and eleven most nights, so when we stepped out of the hotel at 9:30, we walked right into the bustle of a Greek spring evening. We did find the harbor, but we were more taken by the life that swirled around us as we strolled. As we waited on one corner, a guy on a scooter smiled, honked, and shouted, “Hallo, tourists!” as he passed.

In The Sheltering Sky, one of the characters makes the distinction between a tourist and a traveler. A tourist is one who goes to a foreign place and spends most of the time trying to make it feel familiar; a traveler sinks himself or herself into the culture at hand, hoping to be changed. Yes, I am one of those on a big bus riding around with my name tag hanging around my neck, and I came to see more than places and to do more than fill up the memory card on my camera or check off the countries I’ve been to.

The stones continue to speak because I can imagine a time when people moved about in the buildings that once stood; the stories of Paul come to life because I can stack up the years in lifetimes; I will remember people more than things from these days, from baristas to fellow bus riders. History without a face never changed anyone.