Yesterday, we packed up and left Thessaloniki and drove to Veroia 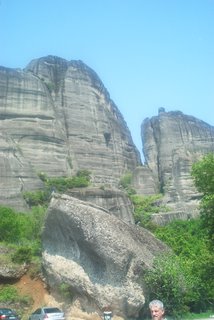 , which is the modern version of the ancient city of Berea where Paul visited. There was a small outdoor mosaic altar where we had our morning devotional and then we all took off for the local cafes to find the bathrooms, or WCs as they call them here. Many of us came back with little snacks from the cafes as well. From there we continued our trek to Meteoria, a lovely little village at the foot of some amazing rock formations, atop of which stand six monasteries.

By the time we got to town, it was lunch, so we had yet another amazing meal and then began working our way up the switchback road to the first monastery where we could take pictures. The decision to build at the top of these giant rock pillars began with hermits settling in the caves above the town, the first of whom was Barnabas in 985 CE. Later, in the fourteenth century, a monk named Neilos decided to build a small church. In 1382, another monk, Athanasios, built the first monastery at the top of one of the rocks. How they ever got up there in the first place, I don’t know, but they soon rigged a net that allowed them to hoist both people and supplies from the valley below. By the time construction was finished, there were twenty-four high altitude monasteries, none of which was accessible by any other means than the nets. 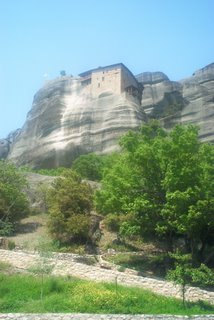 y they were in ruins. When the Greeks ran the Ottomans out, the monasgteries were reestablished on a smaller basis; today only six exist: four for priests and two for nuns. Stairs were added in the 1920s. The largest has about fifteen monks; the smallest has one. In the sixties, when the Greek government realized tourism could help them keep the monasteries in shape, they built roads so folks like us could get there without relying on a rope hoist. We went inside two of them, Holy Triinity and Varlaam.

The wall paintings in the churches of both were amazing. Betty our guide, did an incredible job of explaining the logic behind the way the iconographic images were painted on the walls. The narthex was covered with paintings of saints being martyred. There were images of them being beheaded, beaten, stoned, and even skinned. The images were to remind worshippers of the price paid for faith. “They show the two most important things for a Christian,” Betty said, “to be patient and to be faithful.” The icons were done by iconographers from the Cretan school. The colors were dark and subdued; the images were stern and, well, not very handsome.

“The Greek art always shows youth,” Betty said. “The ancient Greeks thought the most important things were to be young, rich, and beautiful. The icons were meant to show that those things did not matter. These are not young people, or rich, and of course they are not beautiful. Look at them.” She smiled. “The icons are painted so you will look at the eyes, so you will see the spirit. They show the beauty of the spirit.” 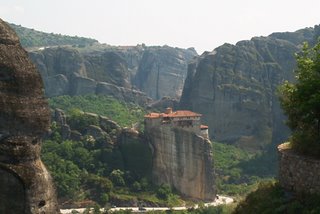 Inside the church she showed us how the architecture and the icons worked together, giving us a cosmological lesson of the universe: earth and sky. The dome at the top of the church was an icon of Christ Pantocrator (creator of all), flanked by angels, and supported on each of four columns by the four gospel writers. Below them – between earth and sky – were scenes, beginning with the Annunciation to Mary and ending with the Ascension, which showed the life of Christ. (We were not allowed to take pictures in either church, other than the one I took before I read the sign.)

“One of the main reasons these scenes were painted over and over in many churches,” Betty said, “was so the people could learn the stories. They could not read, but they could learn from the icons.” 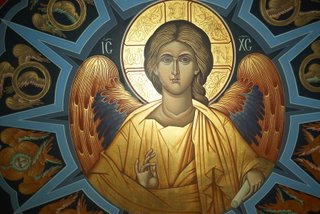 We came out of the churches and out on to balconies that hung over the valley far, far below. Creation was telling the same story; the rocks were crying out. Even as we walked the forest trail from the road above to the second monastery, I could swear I heard the trees clap their hands. It is spring here and the trees are almost fully leafed. The ground is covered with wildflowers and the air full of bird calls. The one I recognized was the mourning dove. I love that Betty took the time for a walk in the woods in the middle of our tour.

I started reading Paul: A Visionary Life by Edward Stourton as we drove. The author is a journalist with the BBC and does a wonderful job bringing fresh eyes to look at Paul and what we make of what we know about him. He has given me new insights in several places, or at least challenged my presuppositions. Paul was a passionate, brilliant, sometimes arrogant, compassionate, tenacious, belligerent, complicated human being. And he, more tha 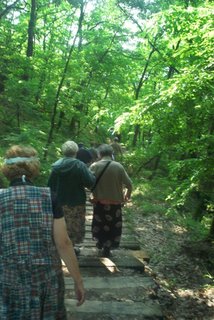 n any other one person, is the reason Christianity is a world wide religion and not a small historical sect. Stourton paints a picture of a man who was deeply committed and passionate in his faith, administratively adept, politically astute, and relationally opportunistic. He paints the picture without one ounce of cynicism. He admires Paul and doesn’t let his admiration get in the way of the picture of who the man really is. Like the iconographers, Stourton paints a picture that allows us to see the beauty of the spirit.

The hermits climbed into the cave; the monks found a way to live our their calling on the top of the mountain; Paul traveled over twelve thousand miles on his missionary journeys trying to live out his faith; and we wound our way up and down the hills, rubbing up against them all, on a pilgrimage of our own. I don’t understand how the monks live their lives in seclusion and Paul is sometimes hard for me to grasp, yet we all help to tell the story of faith, which winds like a mountain road to the most unexpected places.