My father, Milton Cunningham, died August 3, 2013. He was a little over a month away from his eighty-fifth birthday. What follows here are what I said at his memorial service last Wednesday, including a poem I wrote for him entitled “The Skin You’re In.” I’m sure many of the words I write over the next weeks and months will be colored by both my memories an 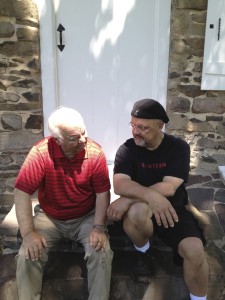 d my grief. Tonight, I am posting these words in gratitude for his life and the life he helped shape in me.
Peace,
Milton

Some time after I was out of seminary, I ran into a friend who had just come from a conference where my father preached. He shook my hand, smiled, and said, “You made your dad’s sermon today.” He then went on to tell me that Dad began his message by saying, “One of the lessons we have to learn in life is the difference between a problem and a predicament. A problem is something you can change or solve. A predicament is something you have to learn to live with. I used to think my eldest son was a problem; now I understand he is a predicament.”

Though I was hurt at first, I learned to appreciate his words because it gave me room to acknowledge that he was a predicament as well. So we learned to live with each other. And it was good. When Dad turned seventy-five, I wrote a Dr. Seuss-like poem for him called “The Skin You’re In,” which looked back at his life. I revised the poem and I would like to make that my offering this afternoon.

The Skin Your In
by Milton Brasher-Cunningham

The problem, you see, is you start to grow
and  — so your bones don’t start to show
your skin will sluff and stretch in size
so folks can continue to recognize

Just who you are, though long since gone
is the kid in the cradle with the sock hat on
who looked pretty ugly, like most babies do,
and from Day One was considered you.

So this is the story of who you became:
as you shed some skin, but kept your name:
you left the Gulf of Mexico
to head for Austin, don’t you know

And on about your sixteenth June
you traded your Austin High Maroon
for the Green and Gold up Waco way
and football to manage, but not to play.

They called you Squirrel, and the nickname stuck
You tackled Baylor with, shall we say, pluck?
Expulsions? Count ‘em: one, two, three —
and you still were elected as head trustee.

Before that happened you got things right
Thanks to the kindness of W. R. White
Who knew that you needed to be wrapped up in grace
as he helped you to figure out your place

and went to Fort Worth and the seminary
and became anything but sedentary,
then you ended up pastor at Cranfills Gap
a town very few can find on a map.

At this point our story grows more exciting
because you decided it was worth inviting
a woman named Barbara into your life
and you became husband and she became wife.

From there you went on to Corpus Christi —
and I’ll bet your eyes are getting misty
because there God gave you your firstborn son,
the smart and strappingly handsome one —

What happened next? Don’t feign amnesia:
we got on a ship and sailed off for Rhodesia.
And there in the land roamed by Livingston
you added a second spectacular son —

Then we headed north, beyond Lake Kariba,
driving past ‘bout a million zebra,
to our new home on Harding Road,
at least that was our last abode

In Lusaka, Zambia, where we spent some years
and you began to shift your gears
working in radio and television
despite the mission boards’ indecision

which led us northward to Nairobi, Kenya
and you chased your dream with all ‘twas in ya
which meant you lived on lots of planes
and you’d come home and then leave again

and then come back to our home in Mwitu
where you asked if we’d all agree to
move again, this time heading west
to Ghana, which was our hardest test

because of the weather: heat and Harmattan,
or humidity that sapped every woman and man;
seems we sweated out about half a year
till you could see that the end was near

and then on your eldest son’s birthday,
we packed our bags and flew away
from Africa, to Houston town
where — yes — heat and humidity abound.

In the heat and the hope of those Texas days
you filled your skin in some brand new ways
as pastor in Houston, and at Baylor, trustee,
and even as Pres. of the BGCT,

yet as Houston became your new mission field
the tether to Africa refused to yield
all of your heart, so you stayed connected:
your love of that land so strongly reflected

in the trips you took and the folks you sent,
but before that’s where the story went,
It was Westbury Baptist where we landed next,
to write the next chapter in our family text,

and a whole host of folks who found their way
to hear just what you had to say —
and what you said they remember still
about  those people up on the hill.

The years stacked up there to seventeen
when you retired, or did you mean
retool? restart? Your work didn’t end,
you just changed again inside your skin

and circled back to the Brazos Bank
where roots so long ago you sank,
this time to be the chaplain guy.
Did people ever wonder why

You showed up just to watch them play
whether baseball, or football, or street croquet?
And somehow you managed to convice them all
that season tickets to everything was your call.

The mission flame continued to flicker
from deep down inside your souped up ticker,
and chaplaincy turned into summer trips
from which students returned with flapping lips

telling stories of what they had seen and done
in Uganda, Ukraine, and the Amazon,
and you knew from deep down inside your skin
what to be next when you retired — again.

And so you moved with both heart and hands
to look with love to other lands
as you had long ago, you did once again,
‘cause it was, as I said, deep inside your skin.

Here’s to the journey that you gave your best,
and the sadness and joy knowing you are at rest;
after eighty-five years, look at who you have been:
Dad, you were the best you in the skin you were in.

I am thankful today that finally my father knows what it feels like to hear and believe that he is enough. And I am thankful that he gave my brother and me a more hopeful world than the one he inherited.