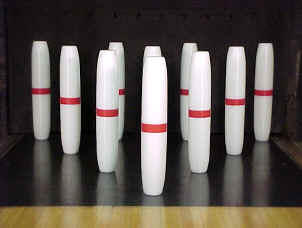 I was supposed to go bowling this evening.

Bowling in New England is unlike bowling anywhere else, unless you happen to be in the Canadian Maritime Provinces. Up here, we call it candlepin, which means – well, here’s how they describe it at Boutwell’s Bowling Center in Concord, New Hampshire:

Candlepin bowling unique to New England and parts of Eastern Canada was invented in Worcester, Massachusetts in 1880. Candlepins use a 4 1/2″ ball that is rolled at tall thin bowling pins that taper at the ends resembling candles hence the name. Candlepins are far more challenging than other forms of bowling with a perfect game never having been achieved. The high score to date is a 245, however the novice should be very happy with a 90 or 100 score.

To me, it feels like throwing a petrified grapefruit at a bunch of giant matchsticks. The game doesn’t make much sense to me. I was going because I am a mentor for one of the Confirmands at the Marshfield church. The message I got said six or eight of us were going to get together. How the rest of the evening went made about as much sense as candlepin bowling. We managed to get our signals crossed just about every way possible and finally ended up at the bowling alley in Scituate, only to find out it was league night and no lanes were available. While I was waiting for them to show up at the alley, I played pinball. I’m not much for video games, but I love flipping it old school. The machine I was on was one that gave ridiculous amounts of points. After two balls, I had 220,000,000 points. Of course, a free game was 550 million, but who cares – for a moment, I was the Pinball Wizard. I left one game in the machine because everyone finally got there and we decided to salvage the evening by going to dinner. The point was to spend some time together, so we accomplished our goal. No harm, no foul. I did miss getting to chunk grapefruit, though.

This afternoon, I hung out with one of the kids from the Hanover church who has a bunch of stuff going on in his family. I had planned to meet him at three; by the time my day went its own way, I had called him back twice to change the time and we finally got together at five. He and I went back up to the church office and put together the youth newsletter while we talked about his life and mine. Over the years I’ve learned a common task often helps break the ice and gets to the good stuff, rather than just sitting and staring. I’m not trying to be his therapist; I just want him to know I care and I’m listening.

Before I went to meet him I fixed some food for a group of ministers that Ginger facilitates monthly. My job is to provide the snacks. I took the opportunity to test drive a couple of Greek recipes I’m fixing for Ginger’s Sabbatical Sendoff Brunch this Sunday, along with some hummus and little bite-sized baked brie in puff pastry which I make every month – it’s their favorite.

The first acts of the day, after getting up with Gracie at 5:45 and then – later – eating breakfast with Ginger, was to clean up the house a bit (we had company coming), go through the recipes and make a shopping list for today and Sunday, and then head to the grocery store. Actually, I went to three because each store had at least one thing the others did not.

Today was kinder that its predecessor, weather-wise: it was partly cloudy and partly cool as well. And I was glad for the tasks that kept me moving because the change in the weather did not bring a marked change in my demeanor. It helped to have things to do, but – more than that – it helped to have people to do things for. One of the basic things that keeps me going is feeling like a contributor. That hits high on my hierarchy of needs. I understand it’s tied to my struggle to feel worthy; I also know that, sometimes, it works like a boost to get out of the pit and get on with my day.

The first time I went candlepin bowling, I threw the ball (actually, I sort of bounced it down the lane), hit a couple of pins, and then waited for the thing to come down, pick up the standing pins, and clear the fallen wood. It never came. In candlepin, you leave the litter in the lane and keep throwing – and you even get three balls. People who actually know what they are doing use the downed pins to knock down those left standing. It doesn’t really work that way for me. All I can do is throw the balls down the lane, one after the other, and then try to sift through the debris to see how I did. Then I punch the button and the thing comes down and resets it all.

Though I never made it to the bowling alley, my day felt a lot like a candlepin frame. I was throwing the best I could, knocking down a few things here and there, but mostly trying to steer my way though the stuff falling down around me to figure out how I was doing. By the end of the frame, I had spent time with one kid, had dinner with another, had fed Ginger’s group, and ended up taking Ginger a cup of coffee up at the church, since she had decided to work late while I was bowling. Then I followed her home.

When we walked out of the church, Ginger said, “I’ll call you when I get in the car so I can hear about your day on the way home because I know you still have to write.” And she did. I told her tales of shopping carts and candlepins as I watched the tail lights of her Wrangler wind through the woods. When you get to finish your day like that, who cares whether or not you got to bowl.