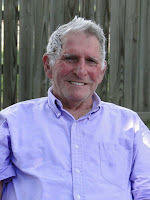 When we came out of the restaurant, the air was raw – even people who know what real winter is would have shared my weather report. The wind was biting and we all braced ourselves as we walked to the car. We went out on a winter’s night because Reuben, my father-in-law, turned eighty today. We wanted to take him to Maggiano’s Little Italy because when we celebrated his seventieth we went to their restaurant in Boston, so we carried on the tradition, even in a different city.

But much has changed in ten years. And in the last two weeks.

Reuben’s Alzheimer’s appears to be picking up the pace of his disappearance, so these days of celebration and remembrance carry even greater significance. As we drove across town to the restaurant, he sang any number of songs that came to mind, beginning with his greatest hit, “Nothing Could Be Finer (Than To Be In Carolina),” and moving through much of Eddie Arnold’s catalog. When we got up from the pub table where they had us wait until our dinner table was ready, he took time to straighten all the chairs before he joined us. We asked questions about memories he can still find and he talked about growing up and going overseas in the Service. And then he effusively expressed his love for Rachel, his wife, and his eyes glistened and danced before they faded, once more, back into blankness. As we drove home, Ginger wished him happy birthday to remind him of why we were out in the cold and he began singing, “Happy birthday to me, happy birthday to me,” with great gusto.

My task before we left for dinner was to make a caramel cake, which has been rather elusive in the years before we moved to Durham. Around here, people actually know what that is. For those of you not from the South, let me say it will meet whatever sugar fix you have. I have tried several recipes over the years and Reuben has been gracious in eating them and enjoying them, but they were never the same as he remembered as a child. Today, thanks to whoever it is that writes Smitten Kitchen, I found a recipe that made the cake I have been looking for. We got home from our sojourn and finished the evening with a good shot of sugar infused with a lifetime of memories. He made it to eighty. We are all here together in Durham, along with the pups.

What we are living through doesn’t get fixed by following the Star.

Christmas will come, Christ will be born, and Reuben will still be disappearing. We will have to tell him it’s Christmas – more than once. And what it feels like for us to live through this year is not new ground. As many Christmases as there have been, there have been people living in pain, losing one another, wondering what difference it makes that unto us a Child is born – which is not as cynical or as hopeless as it sounds. Much of the hope is the resonance of woundedness: we are not the first. We stand in the lineage that begins with certain poor shepherds and winds its way through hospital halls and houses, down the days shared by friends and families who know life’s crushing load all too well.

And Mary brought forth a son who came to both redeem and resonate: God with us.

When I came up to write tonight, I had a song swirling inside me, which I subsequently found on Youtube and watched, cried, and sang along several times before I began typing. The song is Kathy Mattea’s “Where’ve You Been?” (written by Jon Venzer and Don Henry). It tells the story of a couple who were married sixty years before one began to disappear. The final verse says

I get to this point in my posts and I think, “I’m saying the same things over and over.” I am pulled to repeat carols and Patty Griffin lyrics I have posted over and over, I come back to what it means to be community – together, and what it means that God climbed into our skin and joined the circle of woundedness and wonder. I find comfort in the repetition because it’s one of the ways I am drawn to resilience. I read T. S. Eliot’s “Journey of the Magi” and come to the lines where he says

And I can feel him banging those words on the desk, the repetition compelling me to pay attention and let the words make their indelible mark on my heart by tapping at it again and again.

One of the people with whom Reuben shares a birthday is Peter Buck of REM. They have also been victims of my repetition over the years because “Everybody Hurts” is a hymn, as far as I’m concerned.

On this night when the dark and cold are deep inside, when the light in Reuben’s eyes flashed for a fading moment, and when all I know to do is to cling to those I love and words I know so that Christ will be born again in my time, I have nothing new to say. But what I have is enough.