Today we have walked till we are knee deep in melodies and memories.

We woke to a fabulous “Greek breakfast,” which included, among many other things, feta cheese, kalamata olives, fresh pastries, Greek sausage, and a Greek version of Tater-Tots. We then heard a short lecture on Paul from Brian van Deventer, an American pastor who has lived here in Athens for fourteen years working on a number of projects. My favorite line from his talk was comparing Paul’s conversion from persecutor to pastor as imagining something so significant happening as to turn Osama bin Laden into Billy Graham.

After the talk we boarded our bus for a short driving tour of the city and ended up at the Acropolis: Mars Hill, the Parthenon (the parts Lord Elgin couldn’t get in his suitcase to take to Britain), the Temple of Nike (nothing to do with sneakers), and lots of ruins. We climbed the marble stone path to the top of the hill and listened as Betty, our guide, spewed out more names and dates and wars than I can come close to remembering. After her talk, we had time to walk around the ruins, visit the museum, and enjoy the panoramic views of the city, which completely encircles the hill. In her book, The Greek Way, Edith Hamilton says,

Greek architecture of the great age is the expression of men who were, firstof all, intellectual artists, kept firmly within the visible world by their mind, but, only second to that, lovers of the human world. The Greek temple is the perfect expression of the pure intellect illuminated by the spirit. No other buildings anywhere approach its simplicity. In the Parthenon straight columns rise to plain capitals; a pediment in sculptured in bold relief; there is nothing more. And yet – here is the Greek miracle – this absolute simplicity of structure is alone in majesty of beauty among all the temples and cathedrals and palaces of the world. Majestic but human, truly Greek. (50)

We were looking at the remnants of a building erected four centuries before Jesus walked the earth, a building that captures the essence of a group of people who influenced who we are as Westerners more than any other group. It was a sacred space. When we came down off the big hill we had a chance to climb Mars Hill, where Paul debated the Athenians. At the lecture, Brian talked about Paul’s enduring contribution to Christianity being his revolutionary personal ethic. He was less interested in putting forth some sort of theological explanation or treatise and more for talking about how we live out our faith. The mystery of who Jesus was becomes incarnate once more in us: we have to live out our faith in our daily relationships. Mystery and human, truly Paul. 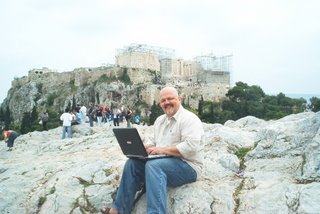 If he could talk there, I could certainly blog there – or at least look like I was (no WIFI hotspot up there).

From there we walked down the hill into a neighborhood called La Plaka, where we had lunch in an outdoor café (moussaka for me). After the meal, Ginger and I broke off from the group and spent the rest of the afternoon walking around the city without a map, following our hearts and our noses as we looked for the perfect sidewalk café and a great cup of coffee. We ended up at the Café Metro, which sits on the plaza at the entrance to the Athens Flea Market. There was an Andean band playing on the square, several African vendors hawking bootleg DVDs of every movie currently playing in the theater, all kinds of children and parents crossing back and forth, a rather varied collection of tourists from all over the globe, and lots of dogs.

Athens is full of stray dogs. All of them have been given their shots and have been neutered. The Athenians would rather let the dogs stay in the street (where people in the neighborhoods feed and care for them) than to send them to shelters, according to Betty, where they might be put to sleep or used for experiments. The people of the city see the dogs as theirs and take care of them. My kind of town.

As we walked home, shops were beginning to close down, even though it was only about four, since tonight is Easter night. The Orthodox tradition is to celebrate the Resurrection on Saturday night. The services begin about ten with a vigil until midnight and then the Resurrection service lasts until sunrise. Tomorrow, according to Betty, everyone stays home and eats roast lamb (done on a spit in the front yard) and all kinds of other good stuff. Their Easter service sounds like our Christmas Eve service at 11:00 pm. We want to be awake when Christmas first arrives. I guess they don’t see any need to wait to declare, “Christ is risen!” We may try to go for part of the vigil tonight, if we can stay awake.

Tomorrow morning we begin a road trip that will take us north to Thessaloniki and Phillipi; in a couple of days we will circle south to Corinth and then back here to Athens, where Ginger and I will leave the group and take off for Turkey on our own. Already the first phase of the trip is over and I hardly feel like we’ve gotten off the plane. This is going to go by quickly; I must pay attention. 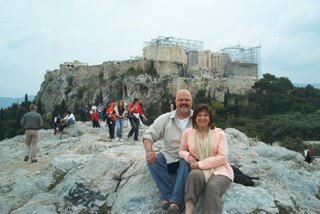 “All things are at odds when God lets a thinker loose on the planet,” Hamilton quotes (31). I’d like to offer a revision, with Bruchac’s help: all things are sacred melody when God lets walkers loose in the city. We walked on marble and dust, up hills and down narrow lanes, past churches and shops, street merchants and stray dogs, enjoying the city and being together: a song worth singing indeed.