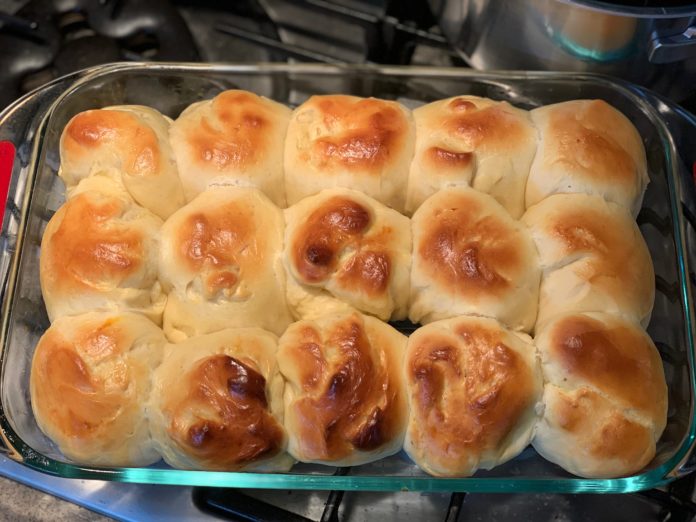 Two of the great unexplained shortages of our unfortunate isolation is flour and yeast. For some reason, everyone decided not only that they wanted to bake bread, but that they needed enough yeast to last until early 2025.

Bread is one of those things you don’t just decide to make. I am quick to say I am a cook and not a baker. I have learned how to make cookies, and, yes, I have to bake to do that, but it is a whole different ball game when yeast gets involved.

The only bread I have ever made with confidence are my mother’s Refrigerator Rolls, which are a Thanksgiving and Christmas staple at our house. I am pretty good at those. The problem with the recipe is it makes so much bread. That is less a problem when we have a table full for Thanksgiving Dinner, but a recipe that makes forty really good soft rolls when three of us are confined to quarters is a recipe for a small, though tasty disaster.

When I found this recipe for Hawaiian rolls and realized it only made fifteen of them, I decided to give it a try. My first batch was tasty but doughy–a sort, chewy paperweight. A couple of days later, I tried again, but my lack of patience still got the best of me. The rolls had a little more air in them, but they still had not risen to the occasion. I did some reading about working with yeast and looked at a bunch of bread recipes to see how and when the yeast was incorporated and what other ingredients went with it. I learned a little bit of science and a little bit of art and tried again.

The third time, I mixed the milk and yeast together first and let it sit for a minute. Then I added the pineapple juice and melted butter, then the sugar and salt, and then the eggs. I also let it rise a bit longer. They came out taller and lighter, but not quite there.

On my lunch break today I went for batch number four. Since I had afternoon phone meetings, I knew I would not be as tempted to rush things. I followed the same procedure as the third time and then left the dough alone for the first rise for over two hours. It had doubled. I shaped the rolls and set it aside for the second rise. I wrapped up some work stuff. Ginger and I walked the pups. An hour later, they had risen also. When they came out of the oven, they looked and felt and tasted like I wanted.

A little over a week ago I wrote about Mark’s account of the feeding of the five thousand where Jesus tells the disciples to feed the people and they say they don’t have the money or the bread to do it. Jesus asks what they have and they bring a sack lunch: five loaves and two fishes. Jesus tells everyone to sit down, starts sharing the lunch, and everyone eats–with leftovers.

Later, when the disciples are trying to row into a headwind, Jesus comes walking on the water, scares them half to death, and then gets in the boat. And Mark says they didn’t get what Jesus was up to because they didn’t understand the lesson of the loaves.

The lesson of the loaves for me this week is that bread takes time. Two teaspoons of yeast don’t transform four cups of flour into bread in just a few minutes. Bread takes time. And these days, what I have is time. Well, time and a good appetite for carbs. I have time to wait, time to fail, time to learn, and time to bake for those I love.

Heat the milk in the microwave for about a minute on high (at least that gets it to the right temperature in mine). Pour the warm milk into the bowl of a stand mixer and sprinkle the yeast over it. Whisk the yeast to dissolve it. Add the pineapple juice, melted butter, eggs, sugar, and salt and whisk until they are combined.

Add two cups of the flour and stir the mixture with a wooden spoon until the dough forms a big sticky mess. Attach the dough hook to the mixer and turn it to medium low. Gradually add the remaining flour until the dough comes together. You may not need all the flour depending on which brand you use. I use King Arthur and I find a cup is about five ounces. Once the flour is added, turn the mixer to medium-high and let it run for about five minutes, until a soft and smooth ball of dough forms.

Put the dough in a clean bowl and cover it with plastic wrap. Let rise until it has doubled in size. The original recipe I used said that would be about an hour. Maybe it is our old drafty house and our cold New England spring, but it takes closer to two for me. (My point is let it sit until it doubles.)

NOTE: One of the tricks I learned is you can control the temperature a bit by putting the bowl in the oven–while it is turned off–and turn on the inside light.

Grease a 13×9-inch pan. Gently take the dough out of the bowl and put it on a clean surface. Use a bench scraper or knife to divide the dough into fifteen equal pieces. Roll each piece into a ball and place in the prepared pan. Cover it with plastic wrap and let the dough double again, which may take anywhere from thirty minutes to an hour.

Preheat the oven to 375°. In a small bowl combine the egg with 2 tablespoons of water. Once they have risen, brush the tops of the rolls with the egg
.
Bake the rolls for twenty minutes or until they are golden brown on top.

One other lesson of the loaves: these are really good warm with a little butter and honey. Leftovers, not so much. 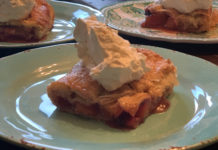