. As I was packing my book bag, I looked around for new literary accompaniment and saw my copy of

The Things They Carried

by Tim O’Brien, which I started rereading before we left Durham (I read it two or three times as a high school English teacher) and then lost it in the move. I found it again last week. On a rainy day when the grey clouds matched the gathering storm of sadness inside me, a book about the Vietnam War was probably not the most uplifting choice, but I wanted to finish it before I started another.

The title speaks to the things the soldiers carried both physically and emotionally, both in combat and back home. The feelings are raw and honest; the stories are compelling and difficult to read. I love this book and, in many ways, it is a long way from who I am. I don’t think war has been or is a solution. Responding to violence with violence does not create peace or foster hope. And I’m not much of a fan or war as a metaphor for life. I found early on that I didn’t help myself by thinking of myself as fighting my depression. I did not want to be at war with myself, so I looked for other metaphors. War—what is it good for? Absolutely nothing. (Say it again, y’all.)

I was in junior high and high school during the Vietnam War, and for much of that time I was in Africa where I heard it described in something other than American terms. It never made sense to me. One of the first songs I learned on my guitar was the “Feel Like I’m A-Fixin’ To Die Rag” by Country Joe and the Fish. By the time I turned eighteen, during my freshman year at Baylor, the war and the draft were over but they were still doing the lottery. My birthday was number eighteen. I have often wondered what I would have done had I been drafted.

I know: what does this have to do with getting us to Bethlehem? It strikes me that Jesus was born during wartime. Maybe part of the reason it made sense for the gospel writers to link the birth to what Isaiah had written was the desperate hope for a prince of something other than conquest and oppression—a prince of peace. Who could even imagine such a thing? A couple of nights ago I wrote about the power of the particular; O’Brien speaks to the same idea, saying a true war story doesn’t speak in absolutes or ideas, but relishes in details, in what happened—or what is remembered.

It is not an overstatement to say that most all of human history could be viewed as life during wartime. Pick most any year and someone is fighting somewhere. The same is true of our history as Americans. We have spent many more years in conflict than we have at peace. But that is not the whole story, or even the best story.

There is a lineage of love and compassion that runs all the way back to Bethlehem, even all the way back to the very first light. We can choose to see ourselves marching as to war, or we can choose to see ourselves as part of the story of redemption and hope. The cast of humanity is the same for both; we must choose how the story gets both told and remembered, what things we carry and what we leave behind. We can see the world with eyes of fear or eyes of faith and trust. This past year I was reminded of a song I love that had slipped out of my story when the Common Woman Chorus sang at our church in Durham. It seems a good place to stop tonight, here on the edge of the little town that will hold the hopes and fears of all the years . . . .

Rest, now, and listen to Susan Warner, the performer and songwriter of “May I Suggest.”

There is a world that’s been addressed to you
Addressed to you, intended only for your eyes
A secret world like a treasure chest to you
Of private scenes and brilliant dreams that mesmerize
A lover’s trusting smile, a tiny baby’s hands
The million stars that fill the turning sky at night
Oh I suggest, oh I suggest to you
Oh I suggest this is the best part of your life 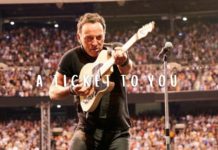