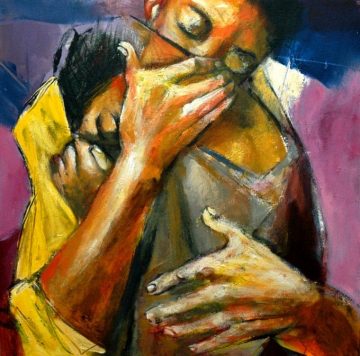 Comedian Steve Martin had a routine in his early days where he talked about how much names matter. He said, for instance, you wanted you bank to be named First Amalgamated Federal National Bank so you felt like your money was safe. If it was called Bob’s Bank you would be less likely to invest because it sounded like you were going to keep their money in your pocket.

When I was in high school, my mother was reading a novel called Christy and she was sure I would like it, but I wasn’t willing to give it a chance. In frustration, she said, “I’ll bet if it was called Joe Fang and His Gang you would read it.” I laughed and said, “I probably would.” When I got home from school that day, there was the book with a handmade cover titled Joe Fang and His Gang.

And she was right: I loved it—once I got past the name.

Jesus never named his parables. The titles were added later by translators and preachers. I’m not actually sure when the names were added. Our passage today is part of three “lost and found” parables that are all named after the thing that was lost and found: the lost sheep, the lost coin, and the prodigal son.

I’ll come back to that word prodigal later.

The names set our vision before we even start reading. We are led to believe that the stories are about the sheep, the coin, and the son, but we need to work hard to see past that filter because it’s not that simple; there’s so much more going on.

Our passage started with some religious leaders, who were people of privilege, criticizing Jesus for welcoming “sinners.” Well, actually, the chapter starts with Luke saying that “tax collectors and sinners” kept coming to Jesus. Even Luke had a hard time grasping Jesus’ love for all humanity, perhaps.

And Jesus did not ignore or shun people of privilege. He hung out with them as well. In Luke 14, the chapter just before our passage, he is eating dinner at one of their houses, which happened quite often. But they couldn’t figure him out, and when they asked questions, he answered in parables, which, as we know, don’t explain anything.

A shepherd loses one of his hundred sheep and doesn’t sleep until he finds it, and then wakes up all the neighbors to celebrate with him. A woman loses one of ten coins and tears up the house looking for it, and then spends who knows how much to throw a party to celebrate. And then, a son asks for his inheritance way ahead of schedule, while his older brother keeps doing what he thinks his father wants so he will get all that is coming to him and maybe more. The younger sibling takes off with his fortune and blows it so badly that he ends up feeding pigs.

The young man then plots a scheme to come home and play humble—just let me be one of your servants; I know I don’t deserve to be a son—because he imagines his father has been angry at him since he left and that’s the only way to get back in the house. But the dad has been watching the road every day, hoping he would come home. As soon as he sees his boy, he welcomes him home without waiting for an explanation.

Before we go on, I want to notice two key difference between this parable and the two that preceded it.

The first two started with questions: Which one of you, having a hundred sheep and losing one of them, does not leave the ninety-nine in the wilderness and go after the one that is lost until he finds it? Or what woman having ten silver coins, if she loses one of them, does not light a lamp, sweep the house, and search carefully until she finds it?—which inclined the readers to see themselves as the shepherd and the woman—sort of a “if you were in this situation . . .”

Then our parable begins, not with a question, but with, “Once there was a man who had two sons . . . ,” which was a familiar way to start a story, sort of the Aramaic equivalent of “A priest, a rabbi, and a minister walk into a bar . . .” But Jesus doesn’t point them to which role to play.

The second thing is that the father doesn’t go looking for the boy the way the shepherd and the woman went looking for what they lost. And the boy was not really lost, for that matter, at least not like the sheep and the coin. He left on purpose and lost sight of himself.

That points me to a third difference. This parable has two lost boys. The older brother might have never left home, but he certainly didn’t feel found. While his brother was away, the older son went to the field every day, made sure things were done right, and worked hard to stay in his father’s favor. When he saw his dad go so completely overboard with his brother came home, he couldn’t take it.

Much like the father had gone out the front door to embrace his youngest son, he went out the back door to find the oldest one when he didn’t show at the party.

The older son had his own ways of trying to manipulate the father: “I’ve been here the whole time and you never let me have a barbeque with my friends.” And the father said, “This is not about you. This about us. Your brother came back. Why wouldn’t we throw a party?”

And that brings me back to the word prodigal. It means “given to extravagance, wasteful, giving on a lavish scale, spending recklessly.”

The word gets attached to the younger son who wastes his life and his fortune, but I think the father is the real prodigal in this story. He is the one who offers extravagant, we might even say reckless love.

Because of the names we have given these parables, we often read them as though they were fables or analogies: the shepherd, the woman, and the father all symbolize God–and God is recklessly extravagant in the way God loves us–but if we look at the context of Jesus telling the stories in response to questions about why he hung out with tax collectors and sinners, I think he wanted us to imagine what life would be like if we were the prodigals: if we were the ones who loved extravagantly.

When we put ourselves in the story—well, I’ll speak for myself. When I try to put myself in the story, the most attractive roles are those of the sheep, the coin, and the kid who got to run wild and then was welcomed back because they are on the receiving end of that crazy kind of love. In real life, I am an older brother, though I was the more experimental one in some ways, but in others I have been true to the role working hard to earn love, to earn a sense of self-worth instead of trusting I was worthy of being loved because I was breathing.

That said, I will make a we statement now.

I think for most, we want to picture ourselves as the younger boy at the end of the story, but
we are, more likely, the older one. I don’t mean that we all wish we would run off and do anything we want until we run out of money. I mean we picture ourselves as the one someone is waiting for, the one who gets celebrated no matter what, but we live like the older brother, acting as though the truth is that love is earned.

That is great news that is sometimes hard to take because we work hard and we would like all that work to mean something—and it does mean a great deal, but it doesn’t earn us love.

The parable reminds us that life is not about getting our due. The younger son wanted his inheritance and the older one wanted his recognition. If we direct our gaze away from the brothers to the father, we see that he went out to both. He went out the front to meet the wanderer and he went out the back to find the dutiful one. He was pouring out love, regardless of circumstance.

Jesus’ response to those who questioned the kind of people he cared about was to tell parables about a shepherd who dropped everything to find the lost lamb, or the woman who spent half her budget celebrating the change she found in the couch cushions, and a father who loved his children with reckless abandon. That is where we are invited to find ourselves in these stories: as the one who is looking for every reason to love prodigally, to welcome outlandishly, to drop everything to look for those waiting to be found.

In that sense, to be a prodigal sounds like a pretty good way to live. Amen.