One of the most enduring stories in scripture, for me, comes from Joshua 4, where Joshua is explaining to the people how they were to mark what had happened in their lives.

When the entire nation had finished crossing over the Jordan, the Lord said to Joshua: “Select twelve men from the people, one from each tribe, and command them, ‘Take twelve stones from here out of the middle of the Jordan, from the place where the priests’ feet stood, carry them over with you, and lay them down in the place where you camp tonight.’” Then Joshua summoned the twelve men from the Israelites, whom he had appointed, one from each tribe. Joshua said to them, “Pass on before the ark of the Lord your God into the middle of the Jordan, and each of you take up a stone on his shoulder, one for each of the tribes of the Israelites, so that this may be a sign among you. When your children ask in time to come, ‘What do those stones mean to you?’ then you shall tell them that the waters of the Jordan were cut off in front of the ark of the covenant of the Lord. When it crossed over the Jordan, the waters of the Jordan were cut off. So these stones shall be to the Israelites a memorial forever.” (1-7)

The stone-stacking metaphor has offered meaning in most every direction in my life. I use it as a way to explain why I think wedding ceremonies matter, to talk about what it means to gather around the Communion table, and also to mark more personal memories. As Bob Bennett sings,

But what if there are no stones? 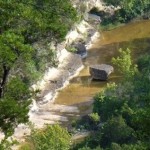 In early October, I had a chance to drop in on my friend, Billy, who lives outside of Wimberley, Texas. He and his wife Dodee have a wonderful place there called Blue Rock, which is, among other things a recording studio and artists’ retreat.

“We don’t know if the water will be back,” Billy said. Their home found its name in the big blue rock that lived in the riverbed down below, ten feet high and fourteen feet wide. Billy and I sat drinking coffee on their big back porch, looking out over the rock and riverbed, and we talked about the drought that had the Hill Country by the throat.

Last week, the water returned, with a vengeance, and when the storm was over, there was a noticeable change in the valley below. Blue Rock — the stone that named them — was gone. 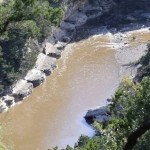 To paraphrase Joshua, when your children ask in time to come, “Where did the stones go?” What will we tell them?

We must tell them stories of grief. Tell them of the floods that break boulders into pebbles, of the sicknesses that take loved ones, of the circumstances that kill dreams. We must tell them of the darkness that is heavy as sorrow, of the hunger that devours so many, of the despair that appears as endless as the stars. And then we must begin to gather new stones and stack them up again while we still remember that love is stronger than death, that grace defies gravity, that hope cannot be washed away. It is the stories, not the stones, that matter most.