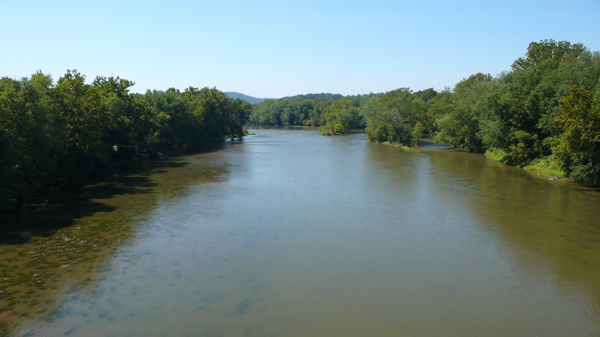 I didn’t write over the weekend because I made a trip back to Durham, North Carolina to take care of some business and see some friends. I am grateful that the necessity of the former offered the gift of the latter. Since I had some things that needed to get from Guilford to Durham, I drove. From our house here in Connecticut to the house we own in Durham is not quite seven hundred miles, door to door–at least, taking the route I chose.

The mapping programs say the best way is to go straight down I-95, but that means going through New York City, Philadelphia, and Washington DC. No, thank you. I chose a to go around, if you will: I crossed the Hudson on the Tappan Zee Bridge, wandered through New Jersey, Pennsylvania, quick swatches of Maryland and West Virginia, cut down in Virginia to Richmond, and then shot down I-95 (to I-85) into Durham.

The drive is beautiful, even with a late-winter landscape. I drove all the way back on Monday, and I left early enough for it to drive in the daylight most all the way. The mountains got bigger the closer I got to the Hudson, but it was the rivers that really pulled me. My eight-state-one-day jaunt took me across rivers with history, rivers of poetry, rivers of great names: the James, the Shenandoah, the Potomac, the Delaware, the Susquehanna, the Hudson. A couple of them were wide enough to feel detached from either side as I crossed. These are rivers that shaped people, that carried people, that hindered people, that killed people. These are waters with wisdom I will never know. I’ve flown over them many times. Monday, I was grateful to be crossing them, to be noticing them. I was thankful I took the time to travel.

I woke up this morning still thinking about those rivers, and on the train ride I looked up a river poem I remembered, Langston Hughes’ “The Negro Speaks of Rivers.”

I bathed in the Euphrates when dawns were young.
I built my hut near the Congo and it lulled me to sleep.
I looked upon the Nile and raised the pyramids above it.
I heard the singing of the Mississippi when Abe Lincoln
went down to New Orleans, and I’ve seen its muddy
bosom turn all golden in the sunset.

Something in those words reminded me of a T-Bone Burnett song from the 90s called “River of Love.”

I was in my thirties when I first heard the song. I hear the second line differently now, because I have felt the flow of the river of grief quite profoundly in the last few years. But Burnett goes on to name other rivers as well, all of which feed and flood our lives along the way.

Several years ago, I learned of Peter Mayer, a wonderful singer-songwriter who has several songs that speak to me, and I have written of him before. The one that came to mind as I thought of my journey is called “God is a River.”

in the ever-shifting water of the river of this life
I was swimming, seeking comfort; I was wrestling waves to find
a boulder I could cling to, a stone to hold me fast
where I might let the fretful water of this river round me pass

and so I found an anchor, a blessed resting place
a trusty rock I called my savior, for there I would be safe
from the river and its dangers, and I proclaimed my rock divine
and I prayed to it protect me and the rock replied

God is a river, not just a stone
God is a wild, raging rapids and a slow, meandering flow
God is a deep and narrow passage and a peaceful, sandy shoal
God is the river, swimmer, so let go

After years of singing “on Christ, the Solid Rock, I stand,” the metaphor exploded with resonance the first time I heard it, and Monday, as I drove back to Connecticut, feeling as though I was driving from home to home and still learning what all of that means for our lives, I felt grateful to be caught in the flow of love, of grief, of God.

P. S. In searching for my river songs, I found this one by Leon Bridges, simply called “River.” The video is compelling; the song is beautiful. You’re welcome.