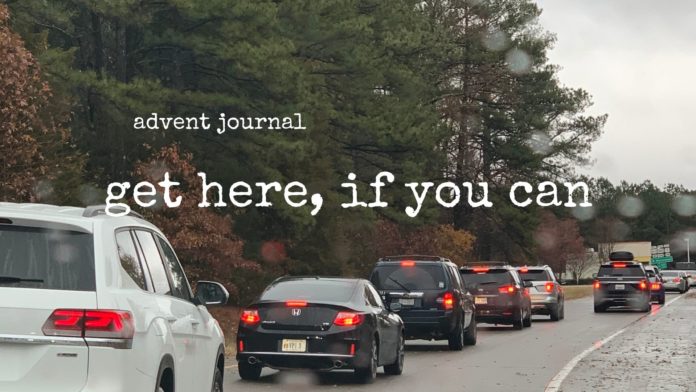 Ginger, Rachel, the pups and I spent the better part of this first day of Advent traveling from Durham, North Carolina, where we spent Thanksgiving, to Baltimore, our halfway stop on the way back to Guilford. We were on the road with several thousand travelers, both coming and going from their holidays, all of us sharing the joys of road construction and thunderstorms. Beyond each other, we have talked only to the people who fixed our sandwiches and checked us out at the WaWa and the hotel clerk and the bartender at the Aloft, a hotel that welcomes pets–oh, and the woman who brought out our food at the pickup spot at the Longhorn Steakhouse.

When we travel, Ginger and I create impromptu playlists that consist of responding to each other’s selections, each of us, in turn, asking Siri to play a song. Since it was raining, Ginger started off with “Rainy Days and Mondays” and we rode the rain theme for about two and a half hours until we stopped just outside of Richmond. When we got back in the car, it was her turn again and she switched to a desert theme choosing “Horse with No Name.” Four or five songs with deserts later, the one that came to mind for me was a favorite from Oleta Adams–“Get Here”

A couple of hours later, things got quiet in the car and I started thinking about what I would write when we finally got to the hotel because my practice of an Advent Journal is a promise I like to keep and also because I am a long way from feeling like Advent is here, or, perhaps better said, that I am here for Advent. The heart of the season has to do with preparing–with getting ready–and I think I am going to spend most of it just trying to get here.

I don’t mean that statement to sound as dire as it might. In fact, I may not even be saying it well.

What has been going through my mind is we often talk about the season as if something new is happening, like we are waiting or preparing for someone who has not already been born. Yes, I quote Meister Eckhart most every year about Christ being born in our time and our culture, but tonight I keep feeling that we are not waiting on a new birth; we know who is coming. We know who has been born already. We are not preparing for him, we are preparing ourselves to be able to be caught by surprise.

But surprise is not always easy; neither is waiting, one of the other verbs we use often at Advent. Both have rather violent roots. The earliest meaning of wait was “to watch with hostile intent.” The root of surprise is “unexpected attack or capture.” The earliest meaning of surprise party was more akin to an ambush than a celebration. The word preparation carries some of that history as well. We, as human beings, hold a long history of suspicion, it seems, and yet all of those words have grown to mean more than violence. Waiting now carries a sense of expectation, preparation means making room, and surprise harbors hope at least part of the time. However ambushed we may feel, the story is not over.

Many of those associated with the story of Jesus’ birth traveled–some of them significant distances. Mary and Joseph had to deal with holiday traffic to get from Nazareth to Bethlehem, the Magi crossed the desert like Arab men, and the shepherds came running into town in the middle of the night. All of them moved through pain and uncertainty. They all came from complicated situations and Jesus’ birth solved none of them. Still, they got there.

Twenty one centuries later, the story we tell has been layered with life, crowded by the marginalia of tradition and theology, colored by companion stories of compassion and hope, colonized by institutions and patriarchy, midwifed by voices of liberation and diversity, among other things. I find it hard to hear it simply as Love came down at Christmas, true as that may be. I want to hear a version of the story that is more than nostalgia, more than repetition or even ritual, more than being glad we can finally do things like we did before the pandemic.

It will never be before the pandemic again. Do we have the courage to speak up if the way we used to do it doesn’t speak to us anymore? How can we get here if our maps no longer lead us?

As I read over what I have written so far, I am aware it is not particularly linear. I didn’t start with a point in mind other than I feel caught up in the traffic of life and wonder how I will get here for Christmas. Perhaps that makes sense for you, too.