Here are the words I spoke at my mother’s funeral: 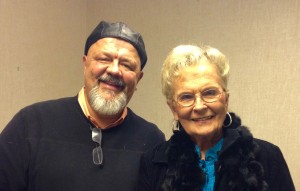 Like the best recipes, this one is simple. First, set the temperature of her life to tenacious. My mother loved being alive as much as anyone I have ever known. She was unflappable in her energy and determination. Whether it was telling first dates at Baylor that if they didn’t want to spend their lives in Africa there would be no second date, or pulling out her Texas drivers license during the Zambia Independence celebrations so that she could pass as a reporter for the Dallas Morning News to get into one of the festivities, or looking at the doctor when he came to visit her in hospice and saying, “If my goal is heaven, what do I need to do?”, she was going to get what she wanted. When he heard her choice to go into hospice, her primary care doctor said, “You have made a choice of courage and hope and not of despair.” Set the temperature on tenacious.

My mother loved connecting with people and then connecting people with one another. One of her visitors in hospice this week was a Baylor student who came with his mother—they had driven all the way from Nashville. Mom found out he was interested in becoming a dentist. A couple of hours later, I came back into the room after stepping out to give her time with others who had stopped by. Mom told me to find her address book and call the young man because she had found him an internship with her dentist who had just left the room.

A love of learning and a willingness to fail. I know—that’s two things, but I think they are tied together, particularly in my mother’s life. She loved to try new things. One of Dad’s favorite stories was about my mother getting ready for a big dinner party, which was only a day or two away. She was still figuring out the menu. They turned out the light and she said, “What have you ever seen done on top of a chicken?”

A party was not the time to pull out old favorites; it was time to make a leap of faith, to go out on a limb, and if people didn’t speak up soon enough she would say, “Isn’t this good?”

Next we add an adventuresome spirit. When my folks were at Westbury Baptist Church in Houston, there were parents that would by my mother a season pass to Astroworld so she could take their kids to ride the rollercoasters. One year they built a big new wooden coaster and advertised a free t-shirt if you rode it ten times in one day. Mom took several middle schoolers to the park. About ride number seven one of them said, “You go ahead, Mrs. Cunningham. We’ll just sit here and wait for you.” She got her shirt.

The last ingredient is an extravagant sense of generosity. She not only shared what she had, but she looked for ways to help you share what you had, too. When she realized she was not going to be able to go back to Africa to live out her days working in an orphange, we all go letters inviting us to help buy blankets and supplies. Over two years she raised almost $60,000. One of the things of which she was most proud is the scholarship fund at Truett Seminary named for her and my father because it was a way to keep on giving and a way to stay involved with missions and with Africa. And if she were here today, she might remind you that you can still contribute so that we can fully fund the scholarship. I’m sure the ushers will be glad to take your checks.

Set the temperature on tenacious and add a contagious faith, a hunger to connect, a love of learning and a willingness to fail, an adventuresome spirit,  and an extravagant sense of generosity, and couch them in the love of a lifetime she found in my father and throw in that she was never afraid to both repeat and embellish a story, and you’ve got Barbara Cunningham, a recipe she was always willing to share.

If you would like to see the service, you can find it here.