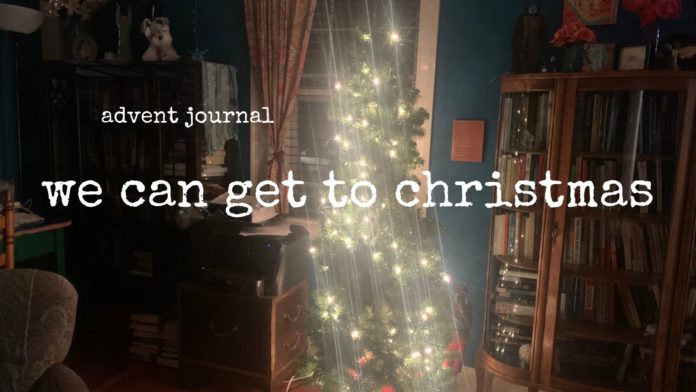 Here is a story I haven’t told in a while.

In December of 1983 I was working as a chaplain at Baylor University Medical Center in Dallas. My roommate, Bruce Reece, owned the condo we shared in North Dallas–well, then it was North Dallas; now it is almost downtown. Bruce traveled a lot with his work and that December was no exception. What was exceptional was the weather. In the evening of December 18 the temperature dropped below freezing and stayed that way until the afternoon of December 30. In between those dates, five Arctic cold fronts hit the region.

Some time a week or so before Christmas, the weather took a turn that meant that those of us at the hospital stayed there for several shifts. My extended stay coincided with Bruce’s travel, so when I finally got home after being at the hospital for three days, I came into an empty apartment and when I stepped on the carpet it squished. The living room had about an inch of water from a broken pipe. We had dripped our faucets, but the people in the adjacent condo had not and their pipe burst into our place, or so it was explained to a person by the management company, who also said they would be by the following day to pull up the carpet and we would need to take down our Christmas tree.

I was handling everything as best I could until he said the tree had to come down. Christmas that year, for me, meant working a half day on Christmas Eve, flying to Houston to see my parents, and then flying back Christmas night to work on the 26th. Bruce’s holiday was about as joyous and we had worked hard to celebrate the season together in a way that gave us both hope. I couldn’t imagine losing the tree.

I was exhausted, and I knew Bruce would be in that night around 1 a.m., so I showered and got ready for bed and then stretched out on the couch so I could explain what had happened. As Bruce tells it (I was too sleepy to remember), as he opened the door and stepped on the carpet, I raised up and said, “The pipes broke from the other people’s place and they are coming to pull up the carpet tomorrow and we have to take down the tree.” Then I fell back asleep and he went on to bed.

The next morning, I had to be back at work, so I was up and gone before he woke up. He had already sent word that he was taking a day off to deal with the mess in the house. I went through my day trying to prepare myself to go home to a concrete floor and no Christmas tree.

This time, Bruce greeted me when I opened the door. He was sitting on the couch where I had been sleeping. The carpet was gone, exposing the concrete slab, but the furniture was still there, as was the Christmas tree, still lighted and decorated.

I don’t remember what I said, but I do remember I began to cry.

“After I saw the look on your face last night,” Bruce said, “I knew we had to keep the tree. I spent the whole morning right here as they were pulling up the carpet, reminding them what was at stake. There was no way I was going to lose that tree.”

It was another two weeks before the freeze finally let up, and a couple of weeks after that before we got new carpet, and through it all that tree held its place and we got to Christmas, mostly because my friend did what good friends do.

Life is hard, I know, and all of us have broken pipes of some sort that are flooding our lives. I also know not everyone reading this celebrates Christmas, but we are all trying to figure out how to keep going. I don’t need to wrap it up more than that; it just seemed like a good time to tell this story.