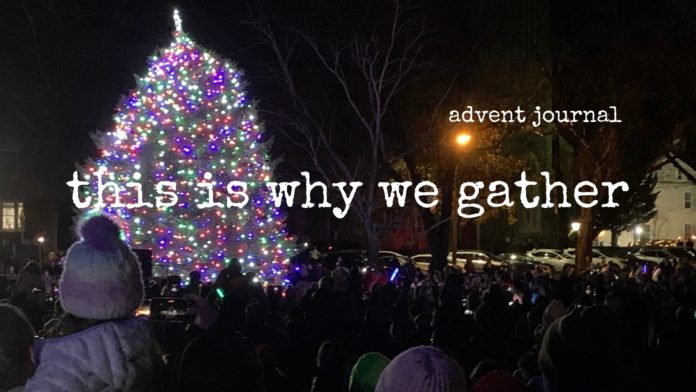 I have no idea how long Guilford has hosted a tree lighting on the Green, but we have managed to be there with several hundred of our closest neighbors for all but one of the seven Christmases we have been in town, the one exception being 2020. You remember 2020.

Our first year was also the first year for the tree that was being lighted because the one that had been used grew to big for the Parks and Rec folks to string the lights. The young one had been growing for several years as an understudy and finally came of age. Seven years later, it is a teenage tree that stands sixteen or eighteen feet tall, I would guess. Over the past week, the workers have strung the lights on the tree and put up a temporary wooden fence around it, along with a couple of lighted reindeer. Yesterday they moved the trailer that opens into a stage into place, and tonight the Green filled up with people, and beyond those surrounding the stage were people on the sidewalks and in the stores and cafés that had stayed open late.

The weather appeared to understand the importance of the evening, offering a clear, crisp night that began about five o’clock, thanks to the short days of the season. About 5:45 the festivities began, which always include performances from local dance classes and choirs, local musicians, and a word from our First Selectman, which is another way of saying Town Mayor, all of it designed to make the five seconds it takes to flip the light switch turn into an hour long event. I felt like I was in the cast of a Hallmark Christmas movie.

We were far enough from the stage to be out of reach of the sound system, surrounded by people who had brought their children and their dogs, though both seemed like poor decisions to me based on the barks and minor meltdowns. Even so, most of the kids were happy to run around with their glory-sticks, and most of the dogs content to peddle for affection from any passer-by. Meanwhile the choirs sang on in pantomime to most of the crowd and a good time was had by pretty much everyone.

We were getting close to seven before Santa showed up to lead us in the countdown–5,4,3,2,1–and the lights went out on the stage and came up on the tree. We all cheered and started walking to our cars and houses. We had done what we came to do and had had fun doing it.

Even before the pandemic, before most all of us developed a longing for most any reason to be around people, the Green has filled up on this night. It is a night full of activity. High school students line the sidewalks with luminaria, the high school choir and orchestra perform their holiday concert in our church for two nights (and four performances). But the night is known for the tree lighting. That is why we gather. And our little town is not alone.

Why do we do that?

Please hear my question in a tone of wonder. On a night when I was not particularly feeling the season, I walked home in wonder that we, as humans, are built to need each other, to think up reasons to be together.

My friend Christopher Williams wrote and sings one of my favorite songs that answers my question:

to be known, to feel safe
to be honest and unafraid
to leave the past, run into hope
to find together we are not alone

to share our story, silence the noise
to hear the wisdom in the tremble of a voice
to carry healing for all the scars
to know we’re more than our broken hearts

This is why we gather: to remember why we matter. People practiced and performed songs and dances, vendors packed shopping carts full of gloves-sticks and light sabres, the Boy Scouts sold hot dogs and hot chocolate to raise money to send care packages to soldiers, the men at St. George’s Catholic Church sold soup and pretzels, the strollers on the sidewalks crowded out the Goldens and Labradoodles, and children chased each other in the darkness–all of it so someone could flip a switch and light the tree.

I need you. You need me. So say the Labradors, the little ones, and the lights on the town tree.

Two things: The e-book version of The Color of Together is 99 cents at Amazon (and other ebooks sellers) for the month of December. Please check it out. Secondly, thanks for reading. My website is free and ad-free because of the support of my readers. If you would like to become a sustaining member, click here. You can also subscribe to my free weekly newsletter, mixing metaphors.