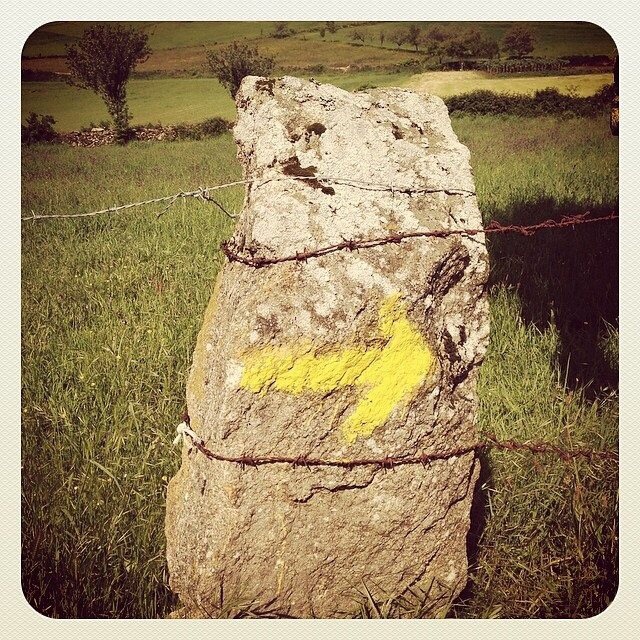 We left Sarria this morning with out much sense of where we were going. Yes, we had a map. Yes, we knew our destination was Portomarin. But neither offered a reference point that connected to our lives beyond we were setting out on the first leg of our journey on the Camino de Santiago. We left our hotel, crossed a small bridge, and began to follow the yellow arrows that mark the pilgrim trail. We are walking the last 113 kilometers of what is known as the French Route. It predates Christianity as a pagan pilgrim trail, but beginning in the eighth or ninth century became a Christian pilgrimage for those who wanted to venerate the bones of St. James, whose remains are said to rest in Santiago de Compostela.

These days, people walk the Camino for any number of different reasons, some having to do with faith and some not. We were joined (and mostly passed) by a bunch of other folks with the requisite scallop shell hanging from their backpacks and their yellow arrow pins shining somewhere on their clothing. I counted at least six different languages. Some walked, some rode bicycles; some moved in groups, others traveled alone. Keeping with the custom handed down to us, each time someone passed we exchanged, “Buen Camino.”

We climbed the hill to get out of town and we were on our way. Our group is made up of five pilgrims and two guides. Two of the women are sisters and Venezuelan, though one lives in Caracas and one in London. The other person besides Ginger and me is an American woman. As we moved out into the country, one of the Venezuelan women began to sing softly, which may have been one of my favorite moments of the day. We were climbing a steep hill and the gentle lilt of her voice was an encouragement as we set out on our adventure. The Camino is a patchwork collection of paths and roads that wanders between farms, alongside of highways, and through village streets, marked by hand painted yellow arrows that show up on the sides of barns and buildings, or on stones in the middle of fields. They were first painted by a priest who began in France and was confronted in the Basque region during the height of the separatist movement when concerns over terrorist activity ran high. When they asked what he was doing he replied, “Preparing for an invasion.”

He didn’t chose the most opportune moment to be poetic and he was telling the truth. Each year more and more pilgrims come to walk the roads and paths for all of the reasons that set them on the trail. As we walked and talked, listened and laughed, I found myself wandering, “Why am I walking?” One answer is this is what Ginger planned for her sabbatical to begin a year for both her and our church that will be focused on prayer. Another is we were moved by the movie, The Way, which ignited interest in the Camino in both of us. But today, as the morning sun shone on my shoulders, as the cows moved from barn to pasture, as we made our way from one Spanish town to another on foot, why was I walking? What was I hoping to find, or hoping would find me?

Today we walked a little over thirteen miles. As I write, my legs are sore and my feet are tired and both only have about thirteen hours before we will be back out on the trail tomorrow. Part of the reason I am walking is for the exercise and to set some new patterns. I need to do what I need to do for there to be less of me on the planet. Though I don’t plan to walk thirteen miles everyday, I am using this week to create a new practice in my life that I plan to continue (in the three to five mile range) when I return. I am walking, in part, because of my love of Don Quixote — both the book and the character. Though I am in Galicia and not La Mancha, to be in Spain makes me feel more connected to one of my inspirations. I am walking, in part, because of the history of the Camino and my love for most anything that incarnates what it means to be connected as humans. On the trail, everyone is walking the same way; this is not a two way street. We are all walking together, to the same place, even as we move at different paces.

My best answer, however, is I am walking to figure out why I am walking. To discover. To learn. To act out a metaphor of faith and life. I am walking to see what happens next. One one section of the path today Ginger said, “There are a lot of signs, but they don’t tell you anything.” Exactly. I am not on the Damascus Road. I am in the middle of the Spanish countryside, separated from most all of my obligations and promises, with a chance to decide whether or not I will chose to use the stones in the road to build an altar, a remembrance, a place to be reminded what it meant to walk these days.

I am walking to walk. To breathe in the space created by my steps. To let my life beat to a rhythm it knows little of. I want to do more than romanticize it or beat myself up for being to busy back home. Beyond that, I’ll just keep walking.