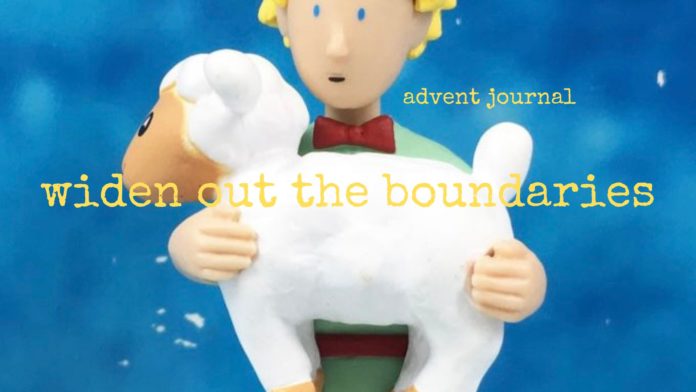 For the Advent season, I am returning to a book I have not finished–The Impossible Will Take a Little While: Perseverance and Hope in Troubled Times, edited by Paul Rogat Loeb. The nearly five hundred page book is an expansive collection of essays and poems intended to inspire us “to join the community of those who work to create a better world.”

One of the essays I read this morning was a short reflection written by the poet Pablo Neruda who recalled standing in the back yard of his house when he noticed a hole in the wooden fence. When he moved closer to investigate, a boy’s hand reached through from the other side and handed him a small white sheep. He never saw the boy again. Neruda said he kept the sheep for many years until it was lost, and then he never passed a toy shop without hoping to find another one. Then he wrote,

pablo I have been a lucky man. To feel the intimacy of brothers is a marvelous thing in life. To feel the love of people whom we love is a fire that feeds our life. But to feel the affection that comes from those whom we do not know, from those unknown to us, who are watching over our sleep and solitude, over our dangers and our weaknesses–that is something still greater and more beautiful because it widens out the boundaries of our being, and unites all living things.

Such is the power of kindness. It widens out the boundaries, expands our comfort zones, illuminates the connections between us. Neruda’s story reminded me of one of my favorite poems: “Zen of Tipping” by Jan Beatty

My friend Lou
used to walk up to strangers
and tip them—no, really—
he’d cruise the South Side,
pick out the businessman on his way
to lunch, the slacker hanging
by the Beehive, the young girl
walking her dog, and he’d go up,
pull out a dollar and say,
Here’s a tip for you.
I think you’re doing a really
good job today. Then Lou would
walk away as the tipee stood
in mystified silence. Sometimes
he would cut it short with,
Keep up the fine work.
People thought Lou was weird,
but he wasn’t. He didn’t have much,
worked as a waiter. I don’t know
why he did it. But I know it wasn’t
about the magnanimous gesture,
an easy way to feel important,
it wasn’t interrupting the impenetrable
edge of the individual—you’d
have to ask Lou—maybe it was
about being awake, hand-to-hand
sweetness, a chain of kindnesses,
or fun—the tenderness
we forget in each other.

I know the poem doesn’t contain any sheep or children, but I found resonance between the boy offering his sheep and Lou tipping random strangers: both found ways to be kind, to communicate connection through rather ordinary acts. And neither Lou nor the boy were the ones telling others what they did.

I think I will sleep on that.