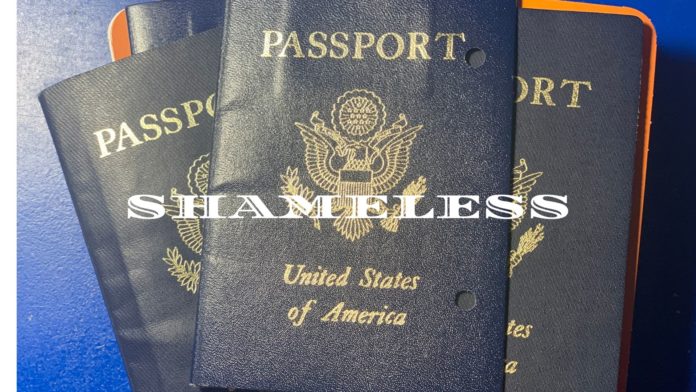 We have always had a passport drawer.

It is the top drawer of an old Singer spool cabinet that sits on top of a table that used to hold a Singer sewing machine. Both were handed down from my mother’s parents. They have traveled with Ginger and me to every house we have lived in and they have always held the passports.

Since both of us are ENFPs, details and organization are not our strong suits. We have a lot of stacks of things and drawers with stuff in them. The passports were different. We knew we needed to be able to find them.

Yesterday–a week ahead of our trip to Ireland and Northern Ireland for a peace and justice retreat (that we were supposed to do in 2020, but you know the story), I opened the drawer to get the passports, proud of myself for thinking ahead, and they were not there. Well, there were passports in the drawer, but they had expired before the last time we had been out of the country in 2018. The valid documents were somewhere in the house, but not in the drawer–the drawer we had not needed to open for four years.

We began two processes this morning: One was to start looking in every drawer and closet and on every shelf to see if we could find them, and the other was to call the US Passport Office to see if we could get a new one as a result of a “travel emergency.”

I dialed the number around 9 o’clock and followed the instructions, pressing numbers when asked to do so. Well, first I dialed in four times only to be told the call volume was too high and to call back at another time. Then I got a voice that told me to press numbers, which led to another voice that told me to hold on for the next available operator, and then another voice that said, “Your wait time is more than two and a half hours.”

My hearing aids have a bluetooth feature that allows my phone to connect directly, so all of this was happening in my head, including the switch from the voice to classical music–a tune I recognized and got to know even better because it was about a three minute loop and I had been told I was going to wait far longer than that. (I would tell you the name of the piece, but I have since blocked it out.)

The website was clear that we could not walk into the passport office in Stamford without an appointment, but we thought we would drive down there just in case someone answered and we could get in line. The trip down to Stamford took about an hour. I have Apple Car Play in my CRV, so I was able to move the music out of my ears and on to the car speakers, but the music never changed. About the time we got to Stamford, the voice told me the wait time was “more than two hours” and then it dropped to “more than an hour and a half.”

I dropped Ginger off in front of the office and went to park. I had barely gotten out of the car when she sent a text that said, “Don’t hang up! Come back and get me but don’t hang up.”

I did as I was told.

By now it was a little after 11:30. We started driving back and ran into heavy traffic, so we made a signature B-C move in such a situation: we got off the highway and found a diner. The Silver Star Diner in South Norwalk. We had lunch and then went across the street to REI to see if I could find a rain jacket for our trip–a small gesture of hope as the music continued to loop in my ears.

As we checked out, the voice said the wait was down to “more than twenty minutes,” then, as we pulled out of the parking lot, a human voice said, “US Passport Office. How may I help you?” We pulled into the next parking lot so we could pay attention.

We laid out the situation and answered all the questions the way the website had instructed. The person asked for our zip code and then said, “We don’t have anything in the Eastern US. I can get you an appointment in El Paso, Tucson, LA, or Hawaii.”

She was serious and she was kind. She just didn’t have anything else to offer. As hard as our day had been, I tried to imagine theirs. For all the time I had waited, they had been talking to people who needed help. Who needed appointments. People who didn’t live in El Paso or Hawaii. She had nothing to offer, but she still had to keep answering the calls of people asking for what she could not give. I thanked her for trying.

As we hung up, I looked at the length of the call: three hours and fifty-seven minutes. Then I realized I forgot to thank them for making the music stop.

As we drove back, Ginger reached out to a couple of our local officials who are a part of our church and they put us in touch with the office of our state representative, Rosa DeLauro. The folks there are trying hard to get us a shot at making our flight on Monday. They too, have been kind.

Sunday we had a guest preacher at the church where I am bridge pastor–a “neutral pulpit” for a search committee for another church. The preacher followed the lectionary, talking about Jesus’ parable that we call “The Friend at Midnight” in Luke 11. I learned the the word as persistence (“I tell you, even though he will not get up and give him anything out of friendship, at least because of his persistence he will get up and give him whatever he needs.”) is better understood as shamelessness, as in the guy knew it was late, but he also knew friends are willing to be taken advantage of, so he asked shamelessly and his friend got up and helped him.

That’s how I have felt today: shameless. Yes, I wish we had kept up with the passports, but as exhausting as the day has been, I am grateful that Ginger and I have not blamed each other or ourselves, have worked hard to turn the house over looking for the passports (and ended up throwing a bunch of stuff out–bonus!), and we have called and waited and driven and asked and then turned to people we trust to see what they can do. And they got up and are trying to help.

I am mindful tonight of the gift of people in our lives of whom we can ask shamelessly. I am humbled, hopeful, and grateful.