My friend David Gentiles knew how to make gumbo. His mama taught him how to do it and he used her recipe. I 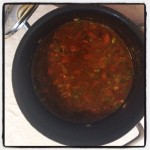 never had a chance to let him teach me how to do it before he died, but on more than one occasion I would call him from Boston and say, “I tried to make the roux, but I burned it.” And he would laugh, not to make fun of me, but a laugh that came out of the deep joy of his existence, out of the heart of our friendship, a laugh that let me know my failure was by no means the last word.

Even with his comforting chuckles, I haven’t attempted a gumbo in years. Until last night. I make lunch for the local UCC clergy gathering the first Thursday of every month and the proximity to Mardi Gras put me in a gumbo state of mind, along with reading Michael Ruhlman’s Ratio

, which has helped me to rethink how I look at certain things when it comes to cooking. So I pulled a couple of cookbooks off the shelf, both of which had been given to me by Cherry, another Cajun friend, and figured out what I wanted to do and then I prepared to make the roux. According to the cloud of witnesses gathered round, what I needed was

I put the skillet on the stove and set it on medium heat. I measured the flour and poured it in a bowl, added the oil and whisked them into a slurry.Then I poured the mixture into the skillet and began to stir. As it cooked, I worked on other things. I diced celery, onions, and peppers; I sliced the chicken and the andouille; I gathered spices; and, about every three or four minutes, I stirred the roux. The oil began to cook into the flour so the two were not so easily separated. And then the color began to change from light beige to a deeper tan, finally ending up almost looking like molten chocolate — without being burned, which is what the recipe said a good roux would do. And it took forty-five minutes.

What the roux needed most was time.

Perhaps I should say, what the roux needed most was for me to take time: to watch, to listen, to stir rather than rush to see how fast I could get on to the next step, to get past the preparation and get the soup going. Beyond even the flour and oil, the most essential element to the whole thing was time. Perhaps I will learn it won’t always take forty-five minutes, but there ain’t no shortcut. It takes time.

As we ate the gumbo for lunch today, we listened to Chuck Campbell, preaching professor at Duke, who had come to talk to us about preaching through the upcoming season. He was enthusiastic and engaged, and I could tell he had taken time to let the texts simmer in both head and heart. I came away with several things on which to ponder, but what I want to mention here is his sense that we have lost the communal nature of Lent, the corporate sense of what the season means. We each have our list of what we are giving up, but there is more to these forty days than saying no to chocolate or caffeine. Lent, he said, is “more social, political, structural, and systemic”: our faith is about challenging the “principalities and powers,” about interrupting institutional injustice with Love. Reinhold Niebuhr said, “Justice is what love looks like in public.” In the hungering dark of these days, we are to remember, as Martin Luther King, Jr. said, that “the arc of the moral universe is long, but it bends towards justice.” It bends towards love.

Last Sunday I preached at our church. The passage was the Transfiguration. I was captured by Jesus’ words to Peter, James, and John after they fell to the ground in fear when they heard God’s voice from the clouds: “Do not be afraid. Get up.” David Lose points out the Greek here is the same as the angel’s words to the women when they come to the Tomb after Jesus’ resurrection: “Do not be afraid. He is risen.” Jesus was saying the same thing: be raised up. Be alive, not afraid.

Fear is the common currency of American culture. Almost every voice that speaks from amongst the institutions that populate our existence, the call is to be afraid, to be very afraid. Our Lenten journey offers us the chance to take the time to remember they are lying to us. Fear is not the bedrock of our existence. Fear is not what motivates us. Fear is not what is most natural. Much like Jesus stared down the temptations in his forty days, we have time, if we will take it, to let the Spirit stir in our hearts and remember the heart of humanity is not found in an institution, nor even in an individual: life, love, faith are all team sports. We are in this together not to build fortresses or monuments, but to, well, be together.

And while we’re together, we might as well eat. I’ll make gumbo.