Because my Lenten practice is to write everyday, I have found that means I must also read. I need to find fellow 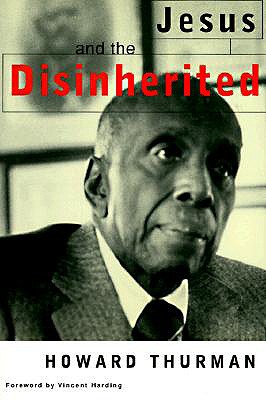 travelers — generally those who have walked the road ahead of me leaving something of a path to follow. What cooking and theology share in common is there’s not much that is new; we are at our best when we are retelling the old, old story in our own way. The paradox is the new light that breaks forth even as we tell the well-worn stories of our faith.

The book I started reading — or should I say re-reading — is not an old book in the scope of Christian history, but is one of the early books of the modern Civil Rights movement, and one Martin Luther King, Jr. is said to have carried with him most everywhere he went: Jesus and the Disinherited

by Howard Thurman. It was originally published in 1949. My edition, printed in 1996, has a foreword written by Vincent Harding, who has been instrumental in connecting faith and human rights in this country for many, many years and is a truly hopeful and gentle soul.

I began feasting on the book during my lunch hour at the computer store. Hardly a page into his piece, Harding says that Thurman’s book could best be described “as a profound quest for a liberating spirituality, a way of exploring and experiencing those crucial life points where personal and societal transformations are creatively joined.” In the margin beside the paragraph I wrote, “Lent,” because the thought connected me back to what Chuck Campbell said yesterday about the season being “more social, political, structural, and systemic” than giving up something as a statement of personal piety.

For many years now, I have felt the final word in most any theological discussion, or most any worship service for that matter, should be, “So what?” Whether we are talking about the veracity of the miracles or the Sermon on the Mount or whether we should paint the Fellowship Hall blue or green, we do well to ask, “So what?” How will what we are talking about now make a difference later? Or, as Harding put it, what will be our personal and societal transformation? So what?

After lunch today, I talked with a woman who is working on a project to teach high school students about World War One by studying graveyards. She has traveled to three of the main graveyards in Europe and had picture after picture of tombstones and monuments. She had stories to go with the stones. I remembered from my study with Facing History and Ourselves the brutal statistics recording the thousands upon thousands who were killed by machine guns — new technology in that war. In one battle, nearly 20,000 fell in a little over fifteen minutes. And it was to be the War That Would End All Wars. The next thing we knew, the world was engaged in the sequel: The Good War. The two centuries my life will span will be marked as those beholden to what Walter Wink calls “the myth of redemptive violence.” So what?

Even as I refrain from writing more about my own views about faith and violence, I realize anything I say is written from a position of privilege and power. I don’t mean I have access to the rooms and meetings where decisions are made. In fact, when it comes to influencing anyone on a governmental level, I feel quite helpless because I don’t have enough money to get anyone’s attention. Nevertheless, when I think about the title of Thurman’s book, Jesus and the Disinherited, I realize I don’t think of myself as one of the disinherited or marginalized. I realized that even more as I began reading because he was writing, not to me, but to those for whom the book was named — those who live with their backs against the wall — and concluding, even as he began,

To those who need profound succor and strength to enable them to live in the present with dignity and creativity, Christianity has been sterile and of little avail. (11)

I wish it were an easier answer than I have been able to find. But Harding and Thurman are good voices in my ear. Harding finished his preface by pointing out that what Thurman wrote in 1949 focused primarily on the needs of African-Americans as representatives of the disinherited in this country has a wider application a half century later.

Latinos, Native Americans, Southeast Asians, and many women and gay and lesbian people are only the most obvious additions to Thurman’s community of the wall. For the pressures of the post industrialist capitalist world order have pushed many other people against a great variety of unfamiliar and unexpected walls (and glass ceilings), and we are all hounded by the inner demons of fear, hypocrisy, and hatred. . . . Shall we gather at the wall?

This week, I found out one of the folks I used to cook with here in Durham was taken in by INS for questioning. Turns out it was a case of mistaken identity. He was not the one they were looking for, but, as long as they already had him in custody they decided to check his papers. He has been in this country almost ten years, has been gainfully employed all of that time, and he is undocumented. So they are preparing to deport him without much of a conversation with anyone, including his employer who is will ing to stand up for him. I’m committed to writing everyday as my spiritual practice during Lent. So what?