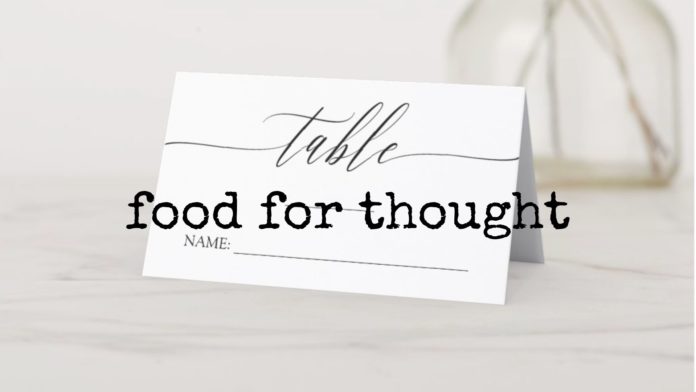 Part of the reason pastors take vacation in August is because the lectionary passages are complicated when it comes to preaching. Or perhaps the Lectionary Committee thought, “Hey, let’s dump all of these in August when we know we are not going to be in the pulpit.” Either way, in the waning days of summer when we are all looking for a little relief, the passages like the one for today (Luke 14:7-14) make us think harder than we want to.

The good news for me is the two parables are about meals, and I am always happy to talk about cooking and eating, whether literally or metaphorically.

I think one of the reasons I like Jesus is because so much of what he did and said revolved around food. He fed people. He ate and drank with all kinds of people. He even cooked breakfast after his resurrection–on the beach, no less. And he used the idea of gathering around the table as one of his primary metaphors in his parables.

All of that speaks to me. Whether I am cooking or eating, hosting the dinner or being hosted, I like to be at the table with people.

You may have noticed that our passage started with, “When he noticed how the guests chose the places of honor, he told them a parable,” which is to say we are coming in during the middle of the story. Jesus was at a dinner at the home of some people of privilege who thought of themselves as The Ones Who Made Sure Everyone Kept The Rules.

I mean, Jesus would eat dinner with anybody!

A sick man came to Jesus to be healed, but it was the Sabbath and the Rule Enforcers frowned on Jesus “working.” Jesus stared them down and healed the man. And then he told these two parables.

The two stories are connected, but they go in different directions. The first is about people who get invited to a banquet and switch their place cards so they can be closer to the the head table. The second is about someone hosting a dinner for people they know will invite them in return.

Jesus said that neither approach was the way to live. Life is about relationships, not transactions.

A couple of years after I got out of college, a friend who graduated after I did called and said he was coming to town and wanted to know if he could take me to lunch. Of course, I said yes. We had a great meal and a good conversation. Towards the end of the meal he told me that he was working for a life insurance company and wanted to talk to me about my insurance needs. My insurance needs were taken care of at that point, but I thanked him for lunch and he went on his way.

About a year later, he called again, saying he was coming through town. We went to lunch again and he tried to sell me insurance again. And it happened a third time, some months after that. At the third meeting, I said, “I am glad to see you and to hear about your life, but I don’t want to buy insurance. If you’re coming to town and you want to eat because we are friends, that’s great. If you want to see me because you think I could be a customer, I’m not interested.”

He never called back.

I look back on him how and I can find grace that I did not find back then. He was just starting out in a career and he worked on commission and he needed customers, so he called people that he knew. And what soured me was he turned a relationship into a transaction.

If he could have said, “Hey, I am just getting started and I could use some help making connections with people; can I buy you lunch and talk it through with you?” the story would have been different. Or, if I could have said, “I know you’re under pressure to sell insurance, but let’s just have lunch and leave that for another time,” rather than being as blunt as I was, we might still be in touch.

I know another person whose parents told her that the proper response to a gift is to return the container full. I gave her some peppers I had canned and she returned the jar full of something. When I said she didn’t need to do that, she said her mother had told her that she had to do that to be polite. But now it leaves me wondering how that expectation leads her to feel about people, like me, who return her containers empty and just say, “Thank you.”

Hear me clearly: life is not as simple as this is the right way and this is the wrong way when it comes to how we relate to each other in most cases. The give and take of our daily lives requires of us to move back and forth between being givers and receivers, hosts and guests. Like is a series of exchanges, in a way–but here is where we have choices about what we make those interactions mean to us and to others.

At the heart of both stories is this: don’t keep score when it comes to giving and receiving.

If you go to a banquet and you are at the table against the back wall, take it as a chance to dance where no one can see you and have the time of your life. If you’re the one hosting dinner, invite the people who need to eat, not those who will make you look good. Either way, enjoy the meal for the sake of the meal. Make a memory, not an accomplishment.

Life is about relationships, not transactions. Amen.