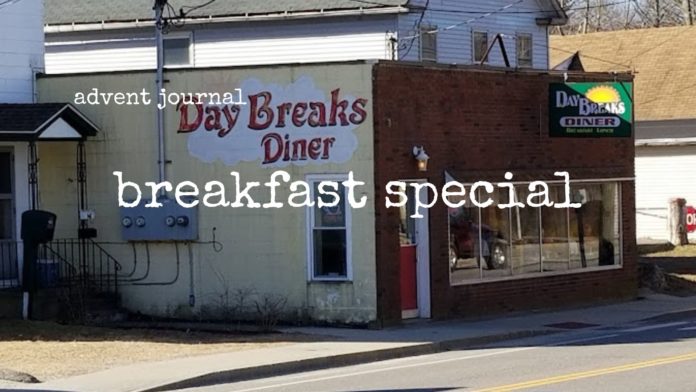 One of the realities of my life is I am not hard to overhear.

I would love to say my hearing loss is primarily to blame, but I have talked loudly all of my life. I have a booming voice, as they say. As my hearing loss has become profound (the official word), I have even less of a sense of the sound I am releasing into the world and have had to learn to judge it by the way my throat feels rather than how I sound to myself, but that means I have to pay attention to how my throat feels and often, when I am engaged by conversation, my attention is aimed elsewhere.

This morning I drove to Plainfield, Connecticut to meet my friend Christy at the Day Breaks Diner. Neither of us had been there before, but it was about halfway between Guilford and Westford, Massachusetts where Christy lives.

We have known each other a long time. I was youth minister at University Baptist Church in Fort Worth, Texas when Christy became my intern to work with TCU students while she was in seminary, circa 1986. When Ginger and moved to Boston, Christy came up several times, both by herself and with church groups. She ended up moving to Boston and then falling in love and getting married. We have seen each other through many chapters of life. Since Ginger and I moved back to New England, Christy and I have met for breakfast a number of times (previously at Danny’s Depot Diner in Moosup, but they were closed today), but the pandemic broke our schedule. Today it resumed.

Day Breaks is everything you want in a breakfast joint: a horseshoe counter, booths that were installed about the time Christy and I met, servers that offer both kindness and little bit of attitude, and really good food. We sat in a booth by the front window, the last in a line of four. I didn’t notice the man who sat in the booth next to us, though I was facing him. Christy and I were talking baseball, which is one of our favorite subjects–particularly the Red Sox, who are in the middle of an uncertain offseason because of some key players who are free agents. As I was lamenting the possible, perhaps even probable loss of Xander Boegarts, the volume of my voice must issued an unintentional invitation to the man, who was eating by himself, because he joined right in, offering his opinion on free agency, the general demise of pro sports, and the danger of NIL (name, image, and likeness) in college athletics.

He talked for a couple of minutes and, I must say, he made a lot of sense. It was as though he had a speech he had been dying to make and had not yet had the opportunity. My ability to talk to a whole room gave him an opening. It felt a little invasive, but then I felt a sense of warmth that we were sitting in a diner having a conversation across booths, even booths divided by plexiglass screens. After a bit, he apologized for interrupting and went back to his breakfast. Christy and I went back to our conversation–with me trying to talk less loudly–and moved on from baseball to catching up on our lives, part of which was my telling her that I may be starting another bridge interim after the first of the year at a church on the other side of New Haven.

That word must have traveled as well because when he stood up to leave he said, “I’m UCC, too,” and smiled as though he might be taking a good memory of the morning with him.

Christy and I sat at the Daybreaks for a couple of hours until our lives called us both back home. We talked to each other, the server, and the man in the next booth. It was good to be with my friend, to lean into stories we have shared for decades, to tighten the bonds, to make the effort to get to one another. And it was good to add another story to the stack of those that make up our friendship, a story of someone who needed to be heard and thought that the guy who talked to loud because he doesn’t hear well must have wanted to listen.

As he was talking, I could see the smile on Christy’s face–that may be my favorite memory of the morning. She was not mocking him. What I saw in her eyes was amusement, even joy–a kind of I-can’t-believe-I-get-to-be-here-for-this kind of look. I hope the expression on my face communicated the same thing.