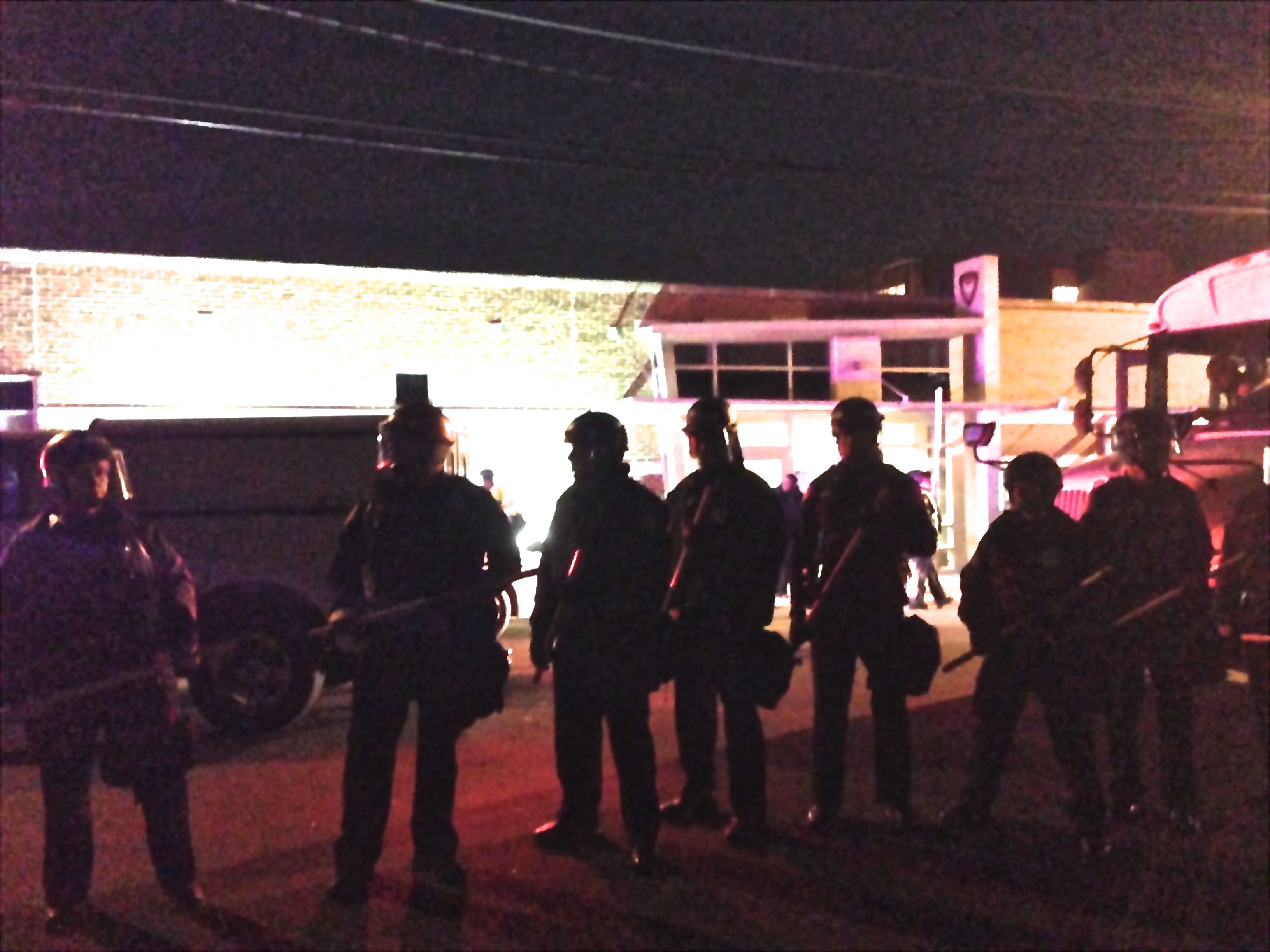 As soon as work was over this evening, I raced across Durham to meet Ginger at the Armory for the Durham Symphony Holiday Concert. Downtown was full of activity: something at the Durham Performing Arts Center (DPAC), a crowd around the downtown Christmas tree, and the usual folks finding their way to one of our many excellent eating and drinking establishments. As I passed the tree, I realized they were protestors joining those around the country trying to figure out how to respond the what has happened in Ferguson, Staten Island, and now Phoenix.

The concert was festive and charming. As we left, the conductor told the crowd that protestors had blocked the Durham Freeway and we might need to take an alternate route. “No alarm,” he said. “Just passing along information.” Since Ginger and I had not seen each other all day, we went into a restaurant and split the cheese plate so we could talk for a bit. As we were getting ready to leave, a group of about one hundred walked by chanting, “These are our streets.” We joined in and walked the three blocks past the Farmer’s Market and up Corporation Street. There were five or six cops on bikes who were pretty casual and considerate. One of the group threw a stone their direction and was quickly shouted down by those around him. Ginger even posted how proud she was of our police to Facebook as we walked.

At the intersection of Corporation and Rigsbee, the crowd turned left toward Motorco and Fullsteam and Ginger and I turned back to the right, to where our cars were parked and also where the police substation is. There were six or eight cars with their lights twirling and a line of cops blocking the street. As we got closer, we realized they were in full riot gear and carrying axe handle sized sticks. There were almost as many of them as there were protestors. About ten of us stood on the sidewalk and tried to tell them they were taking the wrong approach. There was no need for a power struggle. No need for a show of force. It was a protest, not combat. When the enemy didn’t show up, the makeshift army loaded onto a bus and went after them. Literally. They saw where the protestors were and blocked the street to create a confrontation. They arrested about forty people and then kept marching up the street even as the protestors went the other way. The only reason there was any sort of agitation was because the police made it happen.

Ginger called 911 three different times to report what was happening. The last time the operator asked if she would like to speak to an officer and one found her on the street. I walked up in the middle of their conversation. He said the protests had been going on for five hours and “you can’t let civil disobedience go on for five hours.” (Why not?) When she asked about the sticks, he said they were for pushing people back, not for hitting them. “They are better than guns,” he said.

“Those aren’t the only choices,” was my reply.

When I was teaching at Charlestown High School in Boston, one of the biggest lessons I had to learn was not to take personally the anger and rage some of my students. I was not the cause of their rage, though sometimes I became the target. When I could keep my senses and not get hooked into a power struggle, we could work things out. If I got hooked and we both got mad, the kid usually ended up getting suspended because I was the one with the power of the institution behind me. If I got hooked, it was because I let my fear get the best of me. Our police let their fear get the best of them this evening. How can a couple of hundred people marching and chanting be so intimidating and frightening to require our police to act as though they were in a war zone. There was no war. No battle. Just a protest: people walking down the street chanting and carrying signs.

We once referred to the police as peace officers: they kept the peace. Now they are law enforcement and some have even been given surplus weapons by the Pentagon. Rather than figure out how to foster a peaceful protest, they come to break it up, literally and figuratively, as though the creative expression of anger and frustration is dangerous in and of itself. The Durham Police had a chance to do something great tonight, to show America how a city can work together to work out its frustration and pain. And they blew it. Here’s hoping someone in blue will realize the error and do it differently the next time.

As we walked and the cops gathered, I thought of this old recording of Simon and Garfunkel singing “Silent Night” juxtaposed with the evening news. It seems like an appropriate carol to close.