I spent another Monday in Raleigh this week — my third one. The North Carolina Chapter of the NAACP has sponsored the events, which have become known as Moral Mondays, as a response to the damaging laws being passed down b 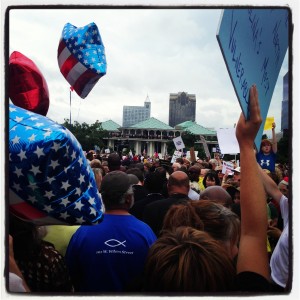 y our state legislature during this session which include cutting unemployment benefits to 170,000 of our citizens and opting out of Medicaid coverage, which will leave many without health insurance. They have proposed other bills to do heavily restrict early voting in our state and to restructure the tax code so that corporations would pay nothing but there would be a sales tax on food. My list of laws is by no means exhaustive.

Each week, a certain number of the protesters have chosen to participate in an act of civil disobedience by entering the NC Legislative Assembly building and staying beyond the legal time limit. (Who knew it was against the law to stay too long?) And they have been arrested. As of yesterday, over 700 people have been taken to jail for doing nothing more than standing and speaking and singing together in solidarity about the injustice being done. The protests have been intentionally kind and nonviolent. And they have been powerful, even though mostly disregarded by those who were elected to listen to the people of the state.

Yesterday, I went in with those who were going to be arrested as a supporter, which means I stayed until th 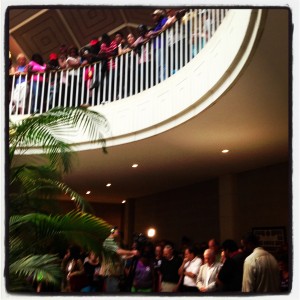 ey told us if we stayed longer we would be taken to jail. The scene inside was thoughtful and determined. “Ain’t gonna let nobody turn me ‘round,” we sang, as we stood in two circles, one floor above the other. Then one young man began to chant, “This is what democracy looks like,” and I thought, “Indeed it does.”

When I was in high school, Ray Charles recorded a version of “America, the Beautiful” that remains my favorite version of the song. What I love most about it is he intentionally sang the verses out of traditional order. He began, 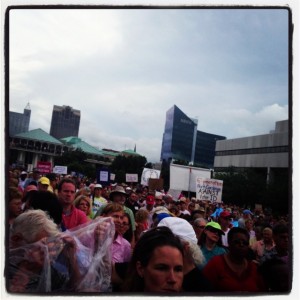 Mercy — that’s what’s missing most from the life our legislators are seeking to fashion for us. Their idea of success carries little or no nobility, and the gains they envision reek of power and conquest, not of compassion and hope. What is beautiful about America is not our wealth nor our power. It is our people — every last one of us. I trust that our Monday meetings are more than flailing at windmills or venting our anger. We are working to move beyond anger, to build something, to believe that we are doing more than bailing water out of a sinking ship; we are banding together to make things better  , to do our best to love justice, do kindness, and walk humbly with our God and with one another.

On Thursday, I will stand on our front porch and read the Declaration of Independence, leaning back into all the years we stood in front of the Old State House in Boston where they have read it every Fourth since the very first. Much of the document talks about the right of the people to do away with a government when it is unjust and unfit to rule. I must say I smiled when I read it again tonight in preparation for my delivery in a couple of days, and as I recalled what it has felt like to stand and sing and shout in the shadow of the Legislature these past few weeks. I smiled because I trust that the arc of history bends towards justice and love. I smiled because, even though these new laws are painful and damaging, they will not be the last word. I smiled because I know our country is not best defined by the richest who get the attention, but by the millions who work day after day for far less than they deserve. I smiled because God is on the side of the poor and the broken and the downhearted.

All the money in the world won’t change that.

America! America!
God mend thine every flaw;
confirm thy soul in self-control,
thy liberty in law.