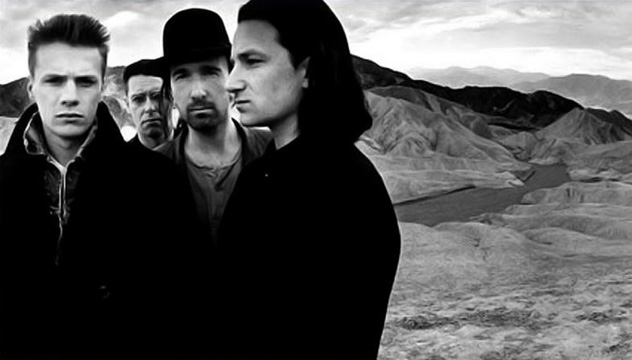 Bryan is one of the folks who was a part of the youth group at University Baptist Church in Fort Worth back when I was Youth Minster. He mentioned in a post that today marked the thirtieth anniversary of the release of U2’s The Joshua Tree. In a comment, one of his friends told how he skipped school to go get the record and was at home getting his bike to ride to the record store, when his dad walked in with what he said was the first one they took out of the box; they played hooky together to listen to it.

I knew about U2 because of the kids in my youth group—well, that and MTV. There was a group of guys in particular that were taken by the boys from Ireland, so much so that they almost didn’t go on our youth group ski trip that year because the record was going to drop while we were gone and they didn’t want to miss it. One of the guys, James, was the son of our Children’s Minister. She agreed to to Sound Warehouse on release day and pick up copies of the CD for all of us—and then to meet us at the airport with them when we got off the place, which she did. None of us had a CD player in the car, so we couldn’t listen till we got home, but it was a great moment nonetheless.

When the band toured later that year, they played two nights at the Tarrant County Convention Center and we were there both nights. B. B. King was the opener. And we were there when they recorded the live version of “When Love Came to Town” that’s on Rattle and Hum. But that’s not the best story. We were gathering to go in on the first night and James was nowhere to be found. When he finally showed up, we quizzed him about his tardiness, and he told us he had been with the band. He had a fantastic story about finding out where they were staying, somehow getting to their room and knocking on the door, and their opening it up and welcoming him as a reward for his bravado. We listened and hoped it were true, but we gave him a pretty hard time. Well into the concert, Bono began his introduction to “Bullet the Blue Sky” by saying, “We had an interesting visitor this afternoon,” and he went on to tell a story we had already heard, but from what it looked like on the other side of the hotel room door. Then he said, “James, this one’s for you,” and the drums and guitar kicked in as we stood in awe of our companion.

James is now a poet and a journalist and a writer in Western Massachusetts. When U2 announced they were doing a thirtieth anniversary tour for the Joshua Tree, James dropped me a note to say he was still a part of the U2 fan club, had a good lead on tickets, and would I like to go with him to see them at Gillette Stadium this summer. So that’s what we are going to do.

Once, in the cool blue middle of a lake,
up to my neck in that most precious element of all,

I found a pale-gray, curled-upwards pigeon feather
floating on the tension of the water

at the very instant when a dragonfly,
like a blue-green iridescent bobby pin,

hovered over it, then lit, and rested.
That’s all.

in certain library books,
so that the next reader will know

where to look for the good parts.

I read the poem over breakfast, not too long before I read Bryan’s post and his friend’s comment and went on my own melodic journey back in time. The reason the poem came back to me tonight is I don’t really have a reason for telling this story other than to tell it. As the poet said, that’s all. Well, also, I suppose, in hopes that it sets you to remembering as well.

P. S.–I am off on a youth retreat with my church this weekend, out into the wilds of Connecticut where there will be no phone service or wifi. You will hear from me again on Sunday night.