Think Tank Pundits are messing with my mind.

I keep trying to imagine what songs are on their record. I think the first single will be “Cheney’s Fools”: “Che, Che, Che/ Cheney’s fools. . .” I could go on, but I won’t – for now.

I was helped on my semantic sojourn by the linguistic stylings of two blogging buddies: Jeff and Spookyrach. In his comment on my post yesterday, Jeff mentioned his favorite new brand name: Dieselfitters (as in “dese’ll fit her!”). He made me laugh. Spookyrach messed me up something wicked awful with these words:

I bought a new eye shadow called Aubergine Queen. I really like it, but that name has become an ear worm. All week long I’ve been singing a bastardized version of Billy Idol’s Caribbean Queen in my head. Over and over and over…

Aubergine Queen
Now we’re sharing a purple dream
And my eyes they blink as one
’Cause my makeup is done.

I spent much of the day humming Billy Ocean songs as I cooked. I probably gave someone food poisoning. All of the wordplay led me back to my favorite sentence of the summer so far. When we were in Germantown, Tennessee for my nephew’s graduation, my sister-in-law’s parents arrived after having driven for about twelve hours. Mary said (here it is – get ready):

“I’m so tired I feel like I’ve been hit in the back with a dead rabbit.”

Nobody knew how tired that was, or why a person had to get hit in the back with a dead rabbit, or a rabbit of any sort for that matter. When we were in Jackson on the Mission Trip, it was my job to go to the grocery store early every morning to get food for the crews going to the coast. They left at six, so I went to the store at four-thirty. By Friday, my last morning of Krogering, I had an epiphany: I was so tired I did feel like I had been hit in the back with a dead rabbit. I still have to call Mary and tell her I understood.

Words, when gathered together in certain groups, are as much about rhythm and melody as they are about meaning. I’m convinced that Sheryl Crow ended up writing “Everyday is a Winding Road” because she came up with the opening line – “I used to ride with a vending machine repairman” – and it was too good to let go; she had to write a song around it. Then there are the sentences that you never expected to hear.

Many years ago, Ginger and I were at a youth camp for a group of churches where one of the adult leaders was teaching a class on massage (gives you an idea of how camp went). I happened to be walking through the room when I heard her say, “Now reach down and grab your partner’s elbow skin.” I stopped and said, “I’m sorry to interrupt, but I have to mark this moment. I never in my life expected to hear someone utter those words.” I’ve never forgotten the moment or the sentence.

Sometimes, I just like the sound of the word. As I passed by the TV this morning, someone on one of the morning shows used the word deleterious, which made me want to figure out a way to use it myself. Put the word together with the aforementioned ear worm and you’ve got something to work with: Billy Ocean’s music has a deleterious effect on humanity.

I don’t have a burning point to make other than, perhaps, to say Jason Mraz is right: it is all about the word play. 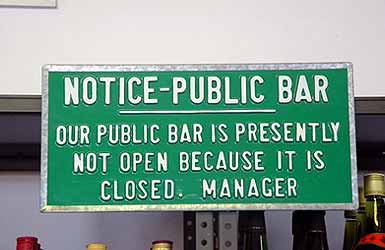