Friday was our final full day in Athens and we had nothing planned. It was a great day.

One of our favorite things to do in a foreign city is to just hang out and that is what we did. After breakfast on Greek time (about 9:30), we walked up the street to a bookstore called Eleftheroudakis and found our way up to the café on the sixth floor (the store had nine stories). Along the way we stopped and browsed, picking up a couple of things. Ginger settled into her seat in the café to finish reading her book on Orthodoxy and I went back to the second floor to look at cookbooks. I returned with my treasures, got a cup of coffee for myself, and we read and talked until we decided to walk towards where we planned to eat lunch. It was a little after two o’clock when we left the bookstore.

Part of our conversation was about things we have learned while being in Greece. Here are a few of them:

— A Greek salad doesn’t have any lettuce in it and is not covered in “Greek” dressing. It is simply quartered tomatoes, thinly sliced red onions, cucumbers,
Kalamata olives, feta cheese (with a little dried oregano sprinkled on top), and
olive oil.
— Feta cheese and Kalamata olives are appropriate any time you eat (and good, too).
— Ouzo tastes like a liquid Twizzler with a mean kick (and I kind of like it).
— Americans make up most of the people in the world who only speak one language. (That’s not a new lesson, but one that bothers me.)
— There is such a thing as enough. Though their standard of living is not as high as what we know in the States, the Greeks are more content. They have fewer possessions and yet more time to drink coffee and enjoy life. They build their houses in stages as they can pay for them so they don’t have to take out mortgages. One of the business people on our trip commented that the reason the Greek economy isn’t growing is because there isn’t much economic flow since people don’t borrow much money. I’ve never thought about debt helping to drive an economy.
— Once you’ve been a way from work for a week you learn a whole new level of relaxation.
— You can do a bunch of things with eggplant.
— Until they speak, it’s hard to tell the difference between Italian teenagers and
American teenagers – except that on high school trips the Italians can smoke and
drink late into the night without getting in trouble.
— Italian teenage boys love Paul Pierce and the Boston Celtics (or at least those whom we’ve recently polled).
— We should all call our cable companies and demand they give us the international version of CNN rather than the cheese that passes for journalism on our cable channels; the folks over here actually get to know what is going on in the world rather than being kept informed as to the whereabouts of Tom Cruise and Jessica Simpson.
— Greek people think Ginger is one of them.

After we left the bookstore, we wandered down some streets we had been before and some we had not, ending up back in the Plaka, the market area below the Acropolis. The narrow streets separate the pastel colored row houses and apartment buildings, each one filled with shops and cafes. We were headed to Taverna Byzantino, which we had read about in one of our guidebooks, to eat lunch. By the time we meandered to our desired destination, ordered, and looked at our watches, it was six o’clock. We were right on schedule in this Mediterranean world: we would be ready for dinner about midnight. We ate and took our time walking back to the hotel. We stopped by the dining room to see who from the remnants of our tour group was there and to catch up with Duane and Robin in particular. They came in around eight thirty; we closed down the dining room and then moved up to the Olive Garden (the rooftop restaurant in the hotel, not the American chain), which is where we met the Italian teenagers. We finished out last night in Athens talking and drinking with our new friends while we looked at the Parthenon illuminated by spotlights atop the Acropolis.

I never imagined I could write such a sentence and it would be nonfiction.

Here’s another one: we are now in to Istanbul.

Growing up overseas has left me somewhat uncomfortable as an American. I like that I can find Burundi, Bulgaria, and Burkina Faso on a map and that I can feel comfortable in most any place, and I struggle, as a Third Culture Kid, to feel at home anywhere. Walking the streets of Athens, going into bathrooms and reading signs that tell you not to put the toilet paper in the toilet (they have a special trash can – the sewer system can’t take the paper), talking to the chef in the restaurant who works full time for one thousand Euros a month (and paid 300,000 Euros for a small apartment), and seeing gasoline selling for over five dollars a gallon (when we complain about it getting to three), makes me mindful of how much we consume as Americans when we are such a small part of the world population. We have gotten used to a “normal lifestyle” that is unrealistic by world standards; the planet couldn’t take it if everyone lived the way we do.

That said, I like having sewers that work and a house by the beach and many of the comforts of the culture in which I live. The creative tension between those two poles is fed in me by trips like this. Living in a global economy means more than all my sneakers are made in China and the guy who answers the computer help line seems to always be somewhere in India. If history without a face means nothing, the same is true of the present tense. As Americans, we listen to the news about Iraq because we know people who have been sent there; we miss the details on Darfur because wholesale suffering is hard to grasp.

On the first page of Zorba the Greek, my novel for the plane ride, one of the characters says, “This world’s a life sentence.” That’s one way to look at it; the other is to let Louis Armstrong provide the soundtrack: “And I think to myself, ‘What a wonderful world.’” Once again, the power is in the creative tension between the poles. We have seen beautiful and amazing things, both natural and human, from the Aegean coastline to Mount Parnassus, from the Parthenon to Philippi, and we have stopped to feed homeless people on the streets of Athens and seen the news reports of the terrorist attacks in Egypt.

I don’t know how to respond to all the information I have about what is going on in the world and what needs to be done. I know I can’t do it all and I know the world cannot afford for me to do nothing. Though I can start by meeting the needs in front of my face, I am also called to put a face on sorrow and despair faraway from me; yet another creative tension in which to live. And we must live in it for there are too many lives in the balance. 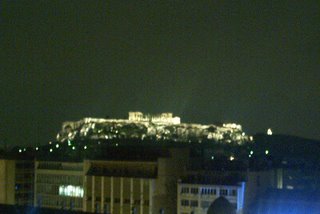