I came home last night from dinner with my friend, Tim, who is in the area for a wedding and turned on the television for something to watch while I tried to make up with the Schnauzers for having left the house at all. What I ended up watching was the last few minutes of the National Spelling Bee. Two girls were left and the word I came in on was poiesis.

She said the word out loud; I said it with her. Then I got a pad and wrote down how I thought it was spelled before she began to spell it. I got it right.

And then I realized – again – I really am a geek.

The two girls, both around fourteen, continued their semantic tennis match for several more words until they came to weltshmerz. Fiona asked for both a definition (“a weary or pessimistic feeling about life”) and the origin of the word. When the prompter told her it was a German word, I thought for sure she would have it. (I did!) Then she spelled it as best she could:

“V-E-L-T—“ The rest didn’t matter. She forgot the w comes out life a v in German. She was gone. Her competitor, Kerry Close, won on the next word, ursprache, which means “proto-language” – what came before the words. It was her fifth year in the Spelling Bee. She said afterward she was so excited because she knew the word. She has been competing at the national level since she was nine. This is one focused kid.

When the interviewer flippantly told her she would finally have time to do some other things, Kerry said, “Yeah” with a strong hint of sadness in her voice. I’m not sure she knows what to do next. Most people, like the interviewer, won’t understand.

A couple of weeks ago, Eleanor, a woman from South Congregational Church in Concord, New Hampshire came to our church in Hanover with the labyrinth some folks in her church made a couple of years back. Eleanor came, set up the labyrinth in our parish hall, and then gave about a twenty-minute presentation on what the labyrinth had meant to her church. Though I knew something ab

out the history of the labyrinth, it was the first time I had heard someone contextualize the practice in terms of church life. After the presentation, about twenty of us spent a couple of hours walking the labyrinth together.

A labyrinth is not a maze. It is a spiritual practice that dates back farther than the words go, enriching faith journeys all over the world for millenia. The oldest existing labyrinth dates back to twenty thousand years BCE. When you start walking, you know you are going to end up in the middle and then come back out. You also have no idea of how you are going to get to the middle because you only have a sense of the path directly in front of you. From there, you have to trust your feet. It, too, takes you to a place before the words.

My journey was marked first, by sensory images. Eleanor had ringed the labyrinth with votive candles and placed a large three-wick candle in the middle. The canvas was purple

, which warmed the room even more. We walked in our socks, so I could feel the surface beneath my feet. I then became mindful of the unexpected ways the turns took me around the circle. I would make a couple of quick turns and then, all of a sudden, find myself on the other side of the circle. I was also mindful of the others in the labyrinth with me, sometimes close and sometimes far away. We smiled or touched hands as we passed one another. My thoughts wandered from superficial to substantive. I wondered how long I had been walking, where Trish got her socks with giraffes on them, whether or not I would walk on every part of the labyrinth, and how long it took to paint it. I also thought about how the twists and turns mirror my life right now, as I have some sense of where I am going, but also know I’m not yet through with my changes.

Then came the words: one of my favorite descriptions of Jesus as he prepared to wash the disciples’ feet: “Knowing he had come from God and was going to God . . . .”

This morning, Kerry Close was making the morning show rounds after her win. One interviewer asked if was glad she had not gotten some of the words that took her competitors out. She quickly named two words that would have sunk her as well. “I guess there’s a little luck involved,” the reporter replied.

For all her years of preparation and focus, Kerry Close had no idea what words were coming when she stepped up to the mike. She could prepare, but she could not plan.

In one of his books, Henri Nouwen recalls going to a monastery for a personal retreat. While he was there, a youth group came, but their retreat leader didn’t show. The head of the monastery came and asked Nouwen to lead the retreat.

“I’m not prepared,” he protested, afraid, I suppose, he would not have the right words.

“You have spent your whole life preparing,” came the reply. “Speak from your heart.”

Nouwen goes on to recount an amazing time with the young people as he listened both to God and to them and found what Jesus also knew: he had come from God and was going to God; that was enough to make the journey matter.

Sometimes, I find a great deal of comfort in that story from Nouwen’s life, which I have carried with me for years. Other days, I wonder if what my life has prepared me to be is some sort of spiritual shiftless drifter who knows little about staying anywhere for long and mostly gets the words he doesn’t know. The truth – and the creative tension – lies somewhere in between. I have come from God and I am going to God. I have much to be thankful for in my life and I am not without direction.

I just wish I knew what was around the next turn. Once more, I will have to trust what was there before the words. 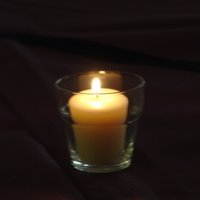