Though National Poetry Month is over, I’m still getting a poem-a-day from Poets.org, for which I continue to be grateful. The first stanza of today’s poem took me on an unexpected journey, or, I should say, raised an unexpected question. Here’s what I read:

There is a sandalwood Buddha on the desk that has my stomach
and I don’t suppose to call myself a Buddha
or even pretend to know much about Buddhist whirlings
but Rachel gave me the thing and it’s got my belly
the one my father has got
and the one his father had
and I know this bulge the way I know my name,
and can’t believe I’ve become the language of fat
that the boys in my family have kept quiet.
(You can read the rest of the poem here.)

The question needs a bit of contextualizing. As far back as I can remember, I’ve thought of myself as fat. When I see pictures of myself from high school and college, I don’t look like I remember feeling: I’m not fat. As I grew older, I grew larger, and round and funny has had its payoff. When I picture myself, I see a big, round guy. Three weeks ago, I started going back to Weight Watchers. I think this is my fourth time. Since I feel I’m on the verge of being a serial weight watcher, I’m working hard to approach it differently this time. So far, there’s fourteen pounds less of me than there was three weeks ago. And I still think of myself as the big round guy. So, my question is:

How do I stop speaking the language of fat?

Actually, the poem says it best: I’ve become the language of fat. How do I become a new language, a new vocabulary? How do I find fluency in something other than the destructive comfort that has felt so much like me for so long?

My family moved to what was then Southern Rhodesia to be missionaries when I was one year old. Like the others before them, they spent their first weeks in language school to learn Sindabele. I stayed with a wonderful woman named Selina who took care of me and spoke to me in both her language and mine. As my father tells it, the first day of class the teacher gave them some vocabulary words. The first word was “isikwapa,” which means “armpit.”

My father was indignant. He had come halfway around the world to tell people about Jesus and the first word he learned was armpit? (By the way, it’s the only word, all these years later, that anyone in my family remembers.) They kept going to class and I stayed with Selina. When I began to talk, I was bilingual from the start; my parents would have done better to stay home with us.

Part of the difference was I had no language to unlearn. They had years and years of grammar engrained into their bones that had to be at least circumvented if they were going to speak a new tongue. Sindabele is one of the “clicking languages,” where you have to learn how to make a particular sound with various consonants. It’s hard work. They did it and it didn’t come easy. Then they had to do it again when we moved north to Zambia. But, if they were going to do what they came to do, they had to learn a new language.

The language I know is as not just the language of fat but also the language of failure. In six and a half years, I will be the same age my grandfather was when he died. He, like me, was a barrel of a man who carried all his weight between his neck and his waist. He, like every male in his family, dropped dead of a heart attack. My father, who will turn 79 in September, rewrote the grammar of his life and is healthy and aging. I’m grateful for his tenacity and resolve. Even with his example, the family resemblance looms large in my life. I feel a little bit like an escaped soldier in one of those old World War Two movies who steals the German uniform and then has to try and fake his way out to get to safety. If he can’t convince people he speaks German, he’s not going to make it. Unless I learn the language of hope, when it comes to my body image, I’m sealing my fate.

I’ve lost fourteen pounds; I have sixty more to go. But the language I want to learn has more to it than numbers and pounds. It is about more than loss. As someone who is an amazingly average athlete, I must learn the words that let me articulate how spending time on the elliptical machine at the gym is paying off. I don’t enjoy working out, particularly, and I have begun to notice my endurance is better, as is my spirit, even at the end of a twelve-hour shift. I must develop a vocabulary that moves beyond whether I gain or lose weight from week to week and talk in more expansive images of how I will be alive and fit in twenty or thirty years. I need new metaphors to remind me I am more than my tummy. I’m not Buddha. Who I am is not determined by how much I weigh. I need images that help me describe what I’m setting free within myself rather than what I’m losing.

I don’t have to buy into the stereotype of the chubby chef. I can find language that expresses the love of good food and being fit and healthy are things that compliment each other, rather than standing at cross purposes. The language is already written; I just have to learn it.

I want the rest of my life to be different and I want it to last a long, long time. 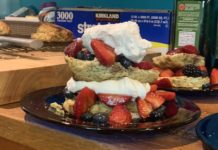