Last weekend, the big event in our neighborhood of Old North Durham was a birthday party. Fullsteam Brewery turned one. For those of you not fortunate enough to live close enough to know why the date matters so to those of here in Durham, let me explain why its presence matters and, in lieu of a birthday card, write my own little thank you note. 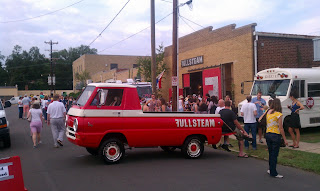 I didn’t make it to Fullsteam on opening day last year, but I got there within the first week. When Sean Lilly Wilson took over the old bottling plant and turned it into a brewery, he built a bar on one side of the big front room and called it The R&D Tavern. They put in some walls around the bar area, and then brought in some picnic tables and eventually built a stage in one corner. In the front part of the room, closest to the big sliding red door with the backwards “F” logo, are a ping pong table, and some old school pinball machines. Oh – and on the side wall closest to the glass partitions that separate the brewing equipment are a couple of dart boards. More than the furnishings or lack thereof, however, it’s what that room has become that matters most: it is, in the truest sense, a public house.

Stop by on most any afternoon, and around the tables will be people drinking and talking together. Some have their children. Some have their dogs. The room feels like it’s been The Place to Hangout in Durham for twenty years, rather than one and it has felt that way since the start. If there is a group that needs to meet, or friends that need to talk, or people who just want to get together, someone will say, “Why don’t we just meet at Fullsteam?” as though that’s where we’ve always met.

In that very room I have played for open mic night, celebrated a birthday with friends, comforted some of those same friends through various griefs and crises, seen a belly dancing conclave, played my share of pinball, sampled the wares of some of Durham’s finest food trucks, heard some pretty good bands, held our monthly church Bible study, and hung out for no apparent reason on any number of afternoons and evenings. Ginger and I moved into the neighborhood about a month before Sean opened his place; walking in there makes me feel like we’ve both been here a long time.

I’ve never had a chance to ask Sean if Fullsteam is what he imagined when the building was still big and vacant and his dream was still out in front of him. I know he works hard at what he does and excellence matters. I know being in that big brick room makes me feel welcomed and connected, two of the things I most like to feel. I am grateful to live in a town with a room like that.

And the great beer makes it even better.

Thanks, Fullsteam. Thanks, Sean. Happy birthday.