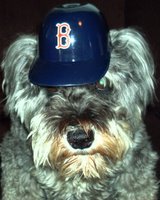 We got her from a breeder/groomer in New Hampshire who raised show dogs. Lola’s parents were champions; Lola was going to be one, too, except she never got tall enough. She is beautiful and, as they say, she’s a short standing schnauzer. (She’s also quite round. Our groomer calls her a little Ewok.) Since Westminster was not in her future, she came to live with us.

We learned quickly that she loved us dearly and has very little room for others in her life. To us, Lola is our little “tub o’ love,” but that affection is not so easily apparent to others. Our friend Jay lived with us for about a year and it took eight months before Lola would stay in the same room with him. Now, all we have to do is say Jay’s name and she gets all excited; they are best friends. Lola’s circle has grown slightly over time; there are now seven or eight folks who can enter our house without being verbally accosted. The rest of you have some work to do.

Over the years we’ve learned some things about how show dogs are socialized. For one, show schnauzers are plucked rather than cut (sounds painful). For two, they are raised to respond only to the trainer, so they don’t get distracted at the show. Lola comes by her social reticence honestly; it’s how she was brought up. What her trainers were trying to teach her was to focus; she learned, instead, how to fear.

Lola is scared, so she acts tough, angry — you get the picture. She’s just incarnating what we all do at times, except for her it’s a lifestyle. We’ve tried all sorts of things, from natural remedies to medication to intense training, and — though she improves — we can’t get to the root of the fear. The best we can do is to hold her, walk up to whomever the dreaded stranger happens to be and say, “Friend.”

My in-laws brought some friends with them, so Lola is adjusting to a house filled with people this morning. Her world has been seriously disturbed and she will tell anyone who will listen. Ginger and her folks just took Lola and Gracie, her little sister, to the beach to get a walk in ahead of the impending cold front. It’s low tide and the beach will be vacant; they can run all they want. That always makes things better.

At least it works for me.