Two hundred and fifty one years ago, on this night, the Scottish poet Robert Burns was born. Though I have a wee bit o’ Scottish blood in me, I’ve never been an avid celebrator of the anniversary, which Garrison Keillor describes as an evening when, “They read Burns’ poems, sing his songs, eat haggis, and drink lots of whiskey.” Alas, the only whiskey in my house is Bushmills.

Burns stays with me for a different reason. As one who taught ninth grade English for a decade, I’ve read John Steinbeck’s Of Mice and Men

more times than I can count, inviting students into the sad beauty of George and Lennie’s life together. The title of the book is drawn directly from Burns:

which is often paraphrased in English as, “The best laid plans of mice and men often go awry.”

You may not remember much about the book. The fact is George and Lennie never had really big plans. Lennie was mentally disabled and looked at life with brutal simplicity. If George had had plans before Lennie, he had already laid them aside to take care of his friend. When they did talk about schemes, they had to do with saving money to get a place together, a dream that hangs in front of them until the very last scene of the novella. George explains it this way, when Lennie coaxes him to tell how they are different from the other guys working alongside them.

Guys like us, that work on ranches, are the loneliest guys in the world. They got no family. They don’t belong no place. . . . With us it ain’t like that. We got a future. We got somebody to talk to that gives a damn about us. We don’t have to sit in no bar room blowin’ in our jack jus’ because we got no place else to go. If them other guys gets in jail they can rot for all anybody gives a damn. But not us.

What ultimately shapes us are not the plans we make, but the people we choose. I thought again today about the anniversary party I went to the other night. Though some attention was given to the various positions Rev. Cheek had held during his forty year ministry at his church, the stories that mattered were told by family and friends about family and friends, the laughter was as deep and resonant as the love that filled the room. Burns was right: the best laid plans won’t work out, mostly. What gives life its meaning are not our successes, for the most part, but those with whom we chose to share the failures, as well as the fun times. We call them our life stories, after all, not our life maps.

Here’s something Steinbeck wrote in his journal about a year after he published Of Mice and Men:

If I think of my life in terms of plans, and plans gang aft agley, it makes about as much sense as a street map of downtown Boston. I’ve gone from being a pastor to a chaplain to a youth minister to a high school English teacher to a chef, with a couple of detours here and there. I’ve not gotten rich, to say the least. If life is some sort of distinguishable path, I’m hard pressed to show mine as a success. The good news is I don’t think of life that way. Life, to use a borrowed phrase, is a journey without maps. We have to pay attention to the people around us in order to find our way.

Every chapter of my life has been filled with those who have offered love and encouragement far more profound than I have deserved, as well as forgiveness. As we close in on twenty years of marriage (this April!), I feel more than ever what I have said before: whatever any kind of final judgment may look like, I believe simply saying, “I was with her,” will be enough to validate my existence, for she is the love of my life.

I have had plans along the way; I still have some. To this point, none of them has worked out as I either hoped or expected. Still, I spent the evening cooking with Abel and Arnaldo and came home to Ginger and the Schnauzers, so I understand exactly what George was saying: I got a future because somebody gives a damn about me. 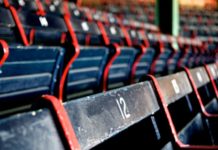 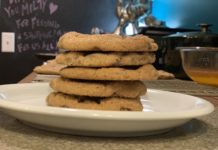